How the Chicxulub Impactor Gave Rise to Modern Rainforests 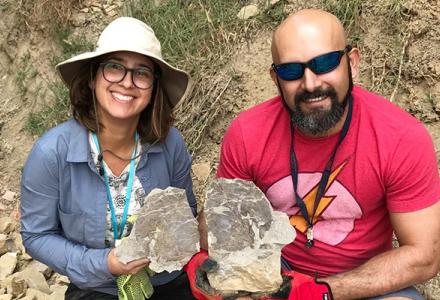 Fabiany Herrera, Ph.D., of the Chicago Botanic Garden’s Negaunee Institute for Plant Conservation Science and Action, together with lead author Monica Carvalho and Carlos Jaramillo—researchers at the Smithsonian Tropical Research Institute—among others, discovered for the first time how the tropical rainforest in South America responded to the asteroid impact that ended the reign of dinosaurs, approximately 66 million years ago.

Their new study, published in Science, shows that the event caused an approximate 45 percent extinction of plants in what is now Colombia. This research took almost two decades, discovering more than 6,000 fossil leaves and examining approximately 50,000 fossil pollen grains. This catastrophic event reshaped and paved the evolutionary history of South American tropical rainforests. “Like a phoenix rising from the ashes,” said Dr. Herrera, “plants such as legumes took over the tropical rainforest after the extinction event.” Today, legumes are a dominant family in tropical South America and are among the most economically important flowering plants. This study also shows that it took almost six million years for the tropical rainforest to recover after the asteroid impact. Herrera highlights that if it took that much time for the rainforest to recover 66 million years ago, how much time will it take for the modern rainforest to recover if we continue disturbing this resilient and fragile ecosystem?

Reference: Carvalho et al. 2021. Extinction at the end-Cretaceous and the origin of modern neotropical rainforests. Science.