The tradition of bringing greens into the house in December has its roots in paganism, not Puritanism. Long before European Christians incorporated swags, garlands, wreaths, and Christmas trees into their religious holiday, Egyptians were decorating with palm fronds, and early Romans were raucously celebrating Saturnalia with drink, gambling, general craziness, and evergreens. The association of the shortest day of the year (winter solstice) with a living tree that remains green year-round was one that caught on with the Romans.

The British, Scandinavians, and Germans expanded on the flowers, plants, and gardening associations of Christmas, and added a tree, decorations, and candles to light up the night. Wealthy Victorians with “glass houses” were able to extend the growing season of indoor plants, many of which could not abide a damp, cold English winter.

As we midwesterners continue to decorate with boughs and bulbs, we should consider choosing live plants that will both brighten our winters and then segue outdoors once frost no longer threatens. Consider the four-season appeal of topiaries—small-leaved, green (but not always) plants, whose trailing stems are trained to grow around, up, and through a wire form. This is truly hands-on gardening, since the plant’s new growth is not allowed to go where it wants to go, but must be coaxed into a predetermined shape. The gardener remains ever ready to redirect wayward stems by pruning, pinching, or twining.

Finished topiaries, already green, lush, and fully formed, fill nurseries and garden centers at this time of year, offering an assortment of shapes and figures. Commonly used plants include ivy, myrtle, rosemary, sweet bay, creeping fig, jasmine, and lavender. Each species has its own personal set of growing preferences, and gardeners must make a good match between their home site and a suitable plant. Ivy is shade tolerant and loves cool conditions, but will crisp up in overheated rooms. Jasmine and lavender prefer excellent air circulation and full sun (not always a daily feature of Chicago winters). Many of these plants can handle a few weeks in less-than-ideal conditions (like the middle of a dining room table), but should be relocated to a better environment once the holidays are over.

When purchased fully formed, the plant will need light watering, a monthly dose of dilute fertilizer, and daily misting. They’ve been grown in greenhouses, with humidity, temperature, light, and fertilizer tightly controlled. When moved to an urban apartment or a suburban home, they might protest a bit and react by dropping some leaves, yellowing, refusing to bloom (jasmine, lavender), or stressing out enough to then come down with a real insect or disease problem. This reaction is not specific to topiaries, but to all houseplants. Gardeners should watch for symptoms of common problems, such as webbing or stippling on leaves (mites), small fungus gnats flying around the soil (overwatering), hard-shelled “bumps” on woody stems or the underside of leathery leaves (scale). Early detection can easily ward off a major infestation.

Crafty? Start One Yourself

The craft-oriented gardener might prefer starting a topiary from scratch. This is best done in late spring, when the plant can pick up a sturdy habit by growing outdoors in ideal conditions. Small transplants of every imaginable green or variegated plant are readily available, as are preformed shapes like spheres, pyramids, obelisks, circles, stars, or some of the whimsical wire forms resembling animals, insects, and dinosaurs! Start small, with a four-inch pot, and a lightweight potting soil or soilless mix. Since the plant will be in active growth during its time outside (and will need to be watered much more frequently), fertilize once a week with a dilute, quarter-strength, balanced fertilizer.

When fall arrives and it’s time to relocate the topiary to indoor conditions, do this gradually, as you would with any houseplant. If you suspect there is a disease or insect problem, do not even bother bringing it indoors, since the problem will worsen because indoor life produces stress. Try to provide extra humidity and air movement for all plants. It has been said that the growing conditions in a stuffy, heated apartment in winter are drier than the desert! Bring on the spray bottle, fans, and at least a ten-degree drop in temperature at night.

Most plants will sharply reduce their growth in winter in response to diminished conditions. March often marks a change in behavior with new buds or leaves appearing. Gardeners should take note and provide a touch more fertilizer, perhaps a change in where the plant is placed (as the sun changes, so should the plant’s location), and an increase in water—but only if the plant dries out more quickly. Introduce the topiary to outdoor conditions gradually, and, depending on the species’ preference, place it outside when night temperatures are 50 degrees. Ivy can survive in cooler weather, but those tropical beauties cannot.

Lee Randhava is a horticultural writer who lives and gardens in Evanston, Illinois. 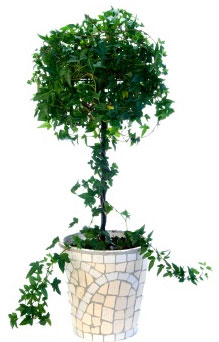 Topiaries can pick up a sturdy habit by
growing outdoors in ideal conditions.

Use preformed shapes like spheres, pyramids, obelisks, circles, stars, or some of the whimsical wire forms resembling animals, insects, and dinosaurs!