Keep evergreens ever safe and happy

Evergreens are cherished in midwestern gardens, parks, and streetscapes for the steady color they bring even to the gray and brown winter. Yet as much as we love to drape them with holiday lights, they often get less respect and care than color-shifting roses and Japanese maples. Evergreen trees and shrubs change so little with the passing days that it's possible to forget they are even alive.

But they are. And growing.
And they have needs.

To keep evergreens healthy and happy, it helps to understand a little about them. Conifers — needled plants, mostly evergreen, that reproduce with cones — evolved in a particular kind of landscape where nutrients are scarce — usually high, rocky places, according to Andrew Bell, the Garden’s curator of woody plants. Where there are few nutrients, leaves are hard to create and too costly to abandon each fall. So evergreens keep their leaves through the winter.

But those leaves are in danger of drying out from harsh, cold winds. So they evolved to be very narrow, in order to expose as little surface area as possible to evaporation, and they developed a protective waxy coating (that makes them stiff) to hold in water. On some plants, such as some varieties of Colorado spruce, the waxy coating refracts light in a way that makes the needles appear more blue than green.

Only a couple of species of conifers are native to the Chicago area — mainly white pine, arborvitae, and juniper — but a wide range of species from temperate zones around the world have found a home in our landscapes.

Other evergreens have wider leaves: boxwoods, for example, such as those stately pyramids in the English Walled Garden. These plants evolved in warmer places where leaves are not as exposed to cold winds in winter.

Your deep soaks should be a week or so apart, to give water time to seep deep into the ground. But keep soaking until the ground freezes — which in some winters may not be until after Christmas.

"Winter kill" is the term horticulturists use for the patches of dried-out foliage often seen on evergreens in spring. In some kinds, it's an overall browning or blackening. Simply prune out dried patches in early spring and, on most evergreens, they will fill in over the growing season.

When you plant, place more vulnerable kinds of evergreens in sheltered places, less exposed to west and south winds. And try to keep them away from driveways, sidewalks, and other pavements where salt will be used to melt snow or salty spray will fly from cars' wheels. Salt dries out plant tissue on contact and accumulates in the soil around the roots.

Most junipers are tough enough to survive winter winds. But arborvitaes are often susceptible to winter kill, leaving them bronzy-looking. Bell suggests you look for varieties bred to stay greener. Some boxwood varieties,too, are better at resisting winter kill.

A burlap wrap, however unsightly, can help protect especially vulnerable plants from wind or salt spray. But Bell says he has seen only mixed results from antidessicants, the spray-on coatings intended to help evergreens hold in water.

Some brown needles are normal. Though a tree or shrub may be evergreen overall, Bell says, each needle lives only a couple of years. Pines, for example, normally drop their oldest needles in late summer. "As long as the newest growth is green," Bell says, "it's okay if you see needles shedding further back on the branch."

Evergreens rarely need fertilizing; after all, they evolved for a world of few nutrients. They only need a little attention and some long soaks. As we enjoy the twinkling lights that deck evergreens on the Esplanade or in our neighborhoods, let's spare a small salute for the green and enduring trees and shrubs that work all winter.


Beth Botts is a garden writer and speaker who lives and gardens in Oak Park, Illinois. 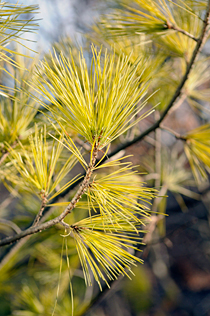 Only a couple of species of conifers are native to the Chicago area, but a wide range of species from temperate zones around the world have found a home in our landscapes.

Find a variety of evergreens from around the world in the Dwarf Conifer Garden.