How to Identify Beneficial Insects 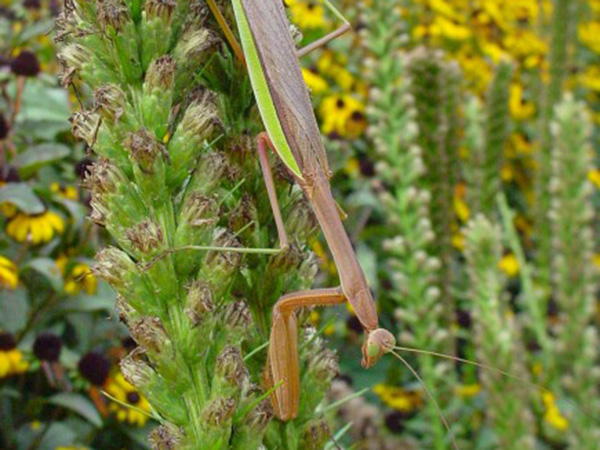 Winter can be as easy or as hard on bugs as on humans, which is why after a fairly mild winter, some gardeners fear the worst. They imagine bugs coming out of their winter dormancy in record numbers: Japanese beetles, aphids, four-lined plant bugs, cucumber beetles, Lymantria dispar moths — the list is legion. And all are ravenous for something green.

Before you act, remember that not all bugs are harmful. If you use harsh chemicals on your garden, you risk killing the beneficial insects along with the destructive ones. Beneficial insects, like bees, pollinate plants and help them reproduce. Others are parasitic, like certain varieties of wasps. Rather than killing a harmful insect outright, they lay their eggs on the insect and let their developing larvae do the job. There are, of course, the beneficial bugs that actually do eat the bad bugs: ladybird beetles, lacewings, ground beetles, praying mantis, and many more. The Chicago Botanic Garden relies on beneficial insects to help control the more destructive types at the Regenstein Fruit & Vegetable Garden.

Number one on many lists of good insects is the ladybird beetle, often referred to as a ladybug. There are many varieties of ladybirds, at least two of which most gardeners have seen: one native and the other Asian. Both are small orange beetles with black spots — almost indistinguishable from one another. In late fall, many homes are invaded by the Asian ladybird looking for a place to spend the winter. They like walls that have been painted white or face south, where they might congregate in the hundreds. They can be vacuumed them up very gently, emptying the bag outside so that the ladybirds fly away.

Ladybirds, particularly their voracious larvae, are among the most efficient predators of aphids and are widely sold commercially by both mail order and retail firms. Just keep them in your refrigerator until you're ready to use them. Some buyers have complained that the ladybirds often fly away when released. One trick is to release them late in the day, after first dampening the area around the aphid-infested plants. The ladybirds settle down for the evening and in the morning wake up to all that wonderful food. As an example, a Garden staffer recalled an okra patch so infested with aphids that repeated sprayings with insecticidal soap didn't work. The area around the okra plants was watered; ladybirds were released in the evening; and she said, "They woke up hungry the next morning, climbed up the okra, and in ten days, the okra was fabulous!"

Another aphid-eater is the green lacewing, a beautiful bright green insect with delicate, lacy wings. But this fragile appearance is deceiving, for the lacewing's reputation as a killer is well deserved. The lacewing larvae, sometimes called aphid lions, are shaped like tiny alligators and can dispose of 60 aphids in one hour. "They're born hungry," says a Garden horticulturalist, and would cannibalize one another if nature hadn't provided a way out for them. The eggs are laid on slender filaments attached to a leaf. After hatching, they crawl down the filament, managing to avoid equally hungry siblings. Green lacewings are also sold commercially, and unlike ladybirds, they have a good reputation for sticking around the garden where they're released.

You may not be aware of them because they're mostly nocturnal, but another beneficial insect—the ground beetle—may live in your garden. By day, these black or brown beetles hide under rocks or boards, coming out at night to feed on cutworms, Lymantria dispar moth larvae, root maggots, snails, slugs, and other bad bugs. The larvae live in the soil and go after other soil-inhabiting insects and insect larvae with huge front pincers. The soldier beetle, or Pennsylvania leatherwing, is usually found inside a flower head where it preys on small caterpillars and grasshopper eggs. Also beneficial are the larvae of the lightening bug, which eat slugs, snails, and other nocturnal, ground-hugging creatures.

The most fearsome-appearing of all the beneficial bugs, looking like something out of a grade-B horror flick, is the praying mantis. But this insect gets only half-credit for doing good. It's nondiscriminating in its tastes, and good bugs as well as bad are likely to be on its menu. Beautifully camouflaged, it sits motionless on a leaf or branch, forelegs upraised, waiting for some unwary insect to come along and become its next meal. Mantises are anywhere from ¾-inch to 5 inches long and will eat anything they can handle, even other mantises.