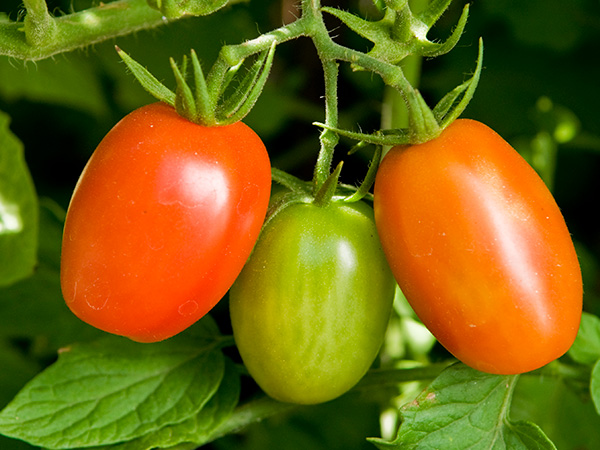 True gourmets know that salsa is much more than a medium for chip dipping; it adds flavor and color to a host of not-only-Mexican dishes, including roasts, stews, sidedishes and even desserts. Vegetable or fruit-based, hot or cold, there are as many kinds of salsas as there are appetites...and you can grow the ingredients needed to create your own!

Salsas can be spontaneous, combining a little of this and a little of that, but they are always tangy, zesty, and full of color, reflecting their Mexican heritage. Families can easily grow all the ingredients of a vegetable salsa in a home garden, taking tips from the successful salsa garden within the Regenstein Fruit & Vegetable Garden. The plants there were all loosely arranged cottage-style and spaced 1 foot apart, rather than lined up in rows. All were planted in full sun in rich garden soil amended with compost. Plants were kept well watered during dry spells, and loose straw was used as a mulch to conserve water and as a footpath for harvest time. The essential ingredients included chili peppers, tomatoes, tomatillos, cucumbers, oregano, scallions, and cilantro.

Chili peppers are perhaps the most indispensable ingredient in Latin American cooking, and salsas account for a large part of their use. There are 150 to 200 different types of chilies, and the native Latin Americans grew them long before the Spanish conquest. Three good varieties to try in salsa are the habanero, the jalapeno, and the new 'Garden Salsa' hybrid. All are hot, but the Scoville scale of hotness lists the habanero as the world's hottest, giving it a rating of 285,000! One seed catalog describes its flavor and aroma as "irresistible" despite its searing heat. The jalapeno is still hot, but much less so. The 'Garden Salsa' hybrid is milder yet, developed just for salsa, offering the exact amount of heat the North American palate supposedly prefers. (Interestingly, the best antidote for the fire in a chili is not a cold beer but bread or dairy products, which do a far better job of putting out the heat.)

Tomatoes are the most important ingredients in a proper salsa. Both paste, or Roma, tomatoes and salad tomatoes can be used at the same time. Recommended paste types are 'Rio Grande' and 'Orange Banana', which add not only color to the salsa but a bit of spice, and a nice pink salad tomato is 'Zapotec'.

The tomatillo, a relative of the tomato, is a plant unfamiliar to most North American gardeners. It will sprawl all over the garden, growing up to 8 feet wide if left alone. But it can be pruned back, tied to a trellis and grown like a tomato. Tomatillos can be green or purple inside with a papery husk outside. When the husks have been split open for several days, they're ready to harvest. Their taste is rather bland and they are often used as a thickening agent in salsas. They require full sun and a long growing season to fully mature.

Bush cucumbers are another warm-season vegetable grown for salads as well as salsa. As with all warm-season vegetables, cucumber seedlings cannot be set out until all danger of frost has passed, sometime after the middle of May. All these vegetables are heavy feeders and require fertilization with a 20-20-20 mix every three weeks.

Small plantings of cilantro, oregano, and scallions complete the salsa bed. All take up very little space and, since they are cool-season vegetables, can be planted out early in spring without fear of frost damage. Lovers of cilantro often sow their seeds in three- to four-week succession to ensure plentiful harvests of this leafy herb.

With plenty of sunshine, warm weather, and adequate rainfall, the salsa vegetables should be ready to harvest by mid-August (the herbs will be ready earlier). Then it will be time to perfect your own brand of salsa.