As we settle into autumn, many winged wonders—butterflies, dragonflies, and countless songbirds—pass through our gardens during the great fall migration. Among these fascinating and colorful creatures is the ruby-throated hummingbird, which travels through the Chicago area in great numbers during September and October.

Although there are as many as 25 species of hummingbirds in the United States, the ruby-throated is the only hummingbird regularly found east of the Mississippi River. During the summer, they are frequent residents at the Chicago Botanic Garden. Right now, many more are coming from Canada, stopping in search of nectar and insects. They’re building up energy for their long journey south. 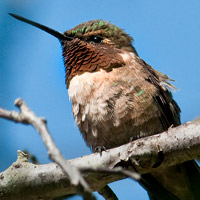 The ruby-throat’s feathers are green above and white on the bird’s underside. The adult male has a ruby-colored throat, called a gorget, that glistens in the sunlight. In shade, the throat appears black while the female’s throat is white. The birds weigh slightly less than a penny but when they’re beefing up during migration, they can weigh as much as a nickel. The ones you see now will spend the winter along the Pacific Coast in southern Mexico down to western Costa Rica. It’s quite a journey for a creature so tiny.

When the birds migrate back here next spring, they’ll fly nonstop across the Gulf of Mexico, a 500-mile journey that takes 15 to 20 hours. On their fall migration south, they either cross the Gulf or follow the Texas coast back to Mexico, according to the Illinois Audubon Society. Contrary to a common myth, they do not migrate on the backs of other birds. Their life span is thought to be an average of three to four years, but some banded birds (those that were caught and have an identification tag around one leg) have lived a dozen or more years.

Hummingbirds have a unique structure that allows their wings to move in a figure-eight motion. They are the only birds that can fly backward. They don’t walk; instead their feet are used for perching and locking onto branches. Birds can fly 25 to 30 miles per hour but the male has been clocked at speeds close to 60 miles per hour. The male performs a dramatic courtship flight in spring, zooming up and down like a pendulum above the female who is perched on a branch watching the acrobatics.

A mature bird can beat its wings more than 50 times per second, which allows it to hover while feeding. The birds eat up to three times their weight each day in tiny bugs, spiders, and nectar. They’ll also take meals from other creatures. Our garden has a large wheelbarrow that I plant with annuals. One summer I watched as a hummingbird darted back and forth to a spiderweb hanging below the wheelbarrow where it picked out insects for its lunch. 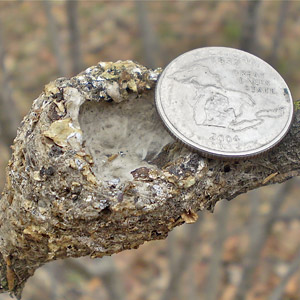 During the late spring and early summer, the female hummingbird builds a golf ball-size nest often made from lichen, bits of spider webs, and soft leaves. There are usually two tiny eggs in the one or two clutches produced each summer. The female sits on the eggs for 14 to 16 days. Baby hummers are the size of a penny and leave the nest when they are 22 to 24 days old.

Hummingbirds' brains are no larger than a pea, but they have an uncanny ability to remember where they obtained food from one season to the next. One chilly morning in April, a migrating hummer hovered at an arbor outside our kitchen window. It was quite cold and nothing was growing on the arbor and the sugar-water feeder was still in storage.The bird hovered for several seconds as it searched up and down for the missing feeder. It remembered that feeding spot from the previous fall—quite an accomplishment—and was back in the spring for more. Now’s the time to get those feeders out so that the same birds may visit your garden next spring. 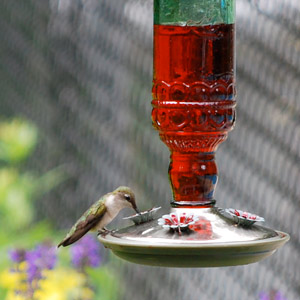 Glass or plastic hummingbird feeders with a perch allow the birds to rest while feeding and will give you a chance to observe them up close. Make hummingbird feeder “food” with a mixture of sugar and water. The ratio is 4 parts water to 1 part sugar, so for every cup of water, you need ¼ cup sugar. Boil the sugar-water mixture for a few minutes and let it cool. Fill the feeders with just a few inches of the mixture. Refrigerate the rest for up to two weeks. Clean and refill the feeders every four days or so, more often if it’s 80 degrees or more. A pipe cleaner or a small brush will help clean the feeding ports.

Hummingbirds typically are gone from the Chicago area by about the second week in October. Don’t worry about leaving the feeders out until later in the month. They will not delay the birds’ migration—they instinctively know when it’s time to leave. 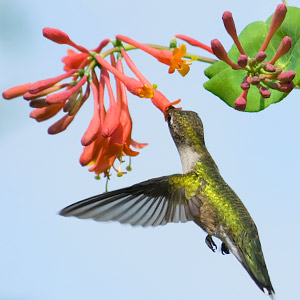 To feed from plants, a hummingbird extends its long, double-barreled, fringed tongue far beyond its bill to collect nectar from deep inside tubular or trumpet-shaped blossoms. But they will also go to daisy-type flowers, such as zinnias. 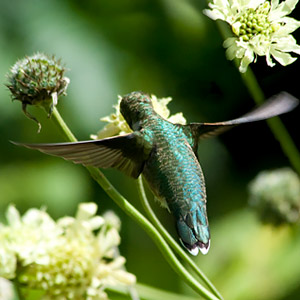 Hummingbirds are typically attracted to red flowers, but one of their favorite plants is the blue-flowered salvia. To make your own hummingbird garden, plant a mix of annuals, perennials, and shrubs as nectar sources. 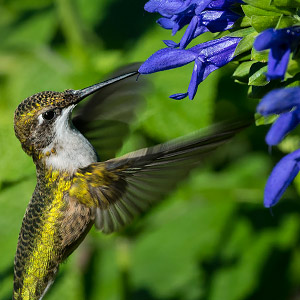 Some hummingbird favorites include the following:

Ruby-throated hummingbird migration begins
Hummingbirds and other Migratory Birds
For Some Birds, Constructing a Nest Could Be a Stretch
Fall Migration is Here!