How to prevent snow damage to shrubs 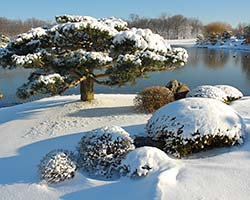 Q: Every winter the snow damages some of my shrubs.  Is there anything I can do to prevent this?

A:  A heavy snow load caused by excessive amounts of snow, ice, or an unusually wet snow will often damage woody shrubs and trees.  Some of the most susceptible plants are boxwood, arborvitae, and yews.  Branches of smaller trees and shrubs can be loosely wrapped with soft cords, old nylon stockings tied together, or twine.  Strings of holiday lights are also helpful in keeping branches together and preventing snow or ice from bending the branches downward. These wrappings should be removed in early spring.

Homeowners should resist the temptation to remove snow or ice by shaking branches.  This can cause breakage of limbs and tender plant tissue, especially when branches are frozen.  Normal amounts of snowfall usually melt or dry naturally, even during cold weather.  Great care should be taken when removing large amounts of snow from branches so as not to break limbs, especially terminal growth on trees or shrubs which can permanently disfigure the plant.  Never attempt to remove frozen ice on branches or loosen branches frozen to the ground.

Proper pruning to remove multiple leaders or weak branches will reduce chances of snow load damage. Examine your shrubs in mid- to late winter to determine the need for pruning.