The Dirt on Soil

If there's one thing that outdoor floriculturist Tim Pollak wishes he could teach gardeners, it would be this: go deep.

It's essential, he says, to work garden soil a good 6 to 12 inches down, all the way through the plants' root zones. "People ignore that," he says. "They may work the soil for a couple of inches, but they are not really getting down where the roots form."

Who wants to think about soil? It's surely the least glamorous thing in gardening. When seeds come in the mail, when garden centers start to fill with tempting flowers, when juices start to flow and gardeners' ambitions are highest, drudging in the dirt is not the way most of us want to spend our Saturday.

Yet good soil, whether purchased for pots or created in the garden by adding organic matter, is the absolute foundation for plants' success. All those fabulous flowers won't have a chance unless they are planted into soil that allows both water and oxygen to reach their roots, but lets surplus water drain away so the roots aren't rotting in an underground puddle.

A crucial quality in soil is the size of the particles. Bigger particles pack less closely, leaving more space between for water and air to flow. Sandy soil, with big particles, is most porous and drains almost too well for many plants, letting water escape before being absorbed by roots. At the other extreme, clay soil, the bane of many Chicago-area gardeners, has tiny particles that fit together tightly, trapping water and shutting out oxygen.

The goal is a happy medium. The magic ingredient is organic matter — basically, anything that was once a plant. Ideally, it will be composted to the point where it is relatively fine and loaded with beneficial microorganisms that work with plants' roots to provide nutrients and fight diseases. The particles hold water that they can make available to plants, but there's space between them for air and drainage.

Soil in Your Beds

Pollak recommends adding compost or other organic matter, such as well-broken-down and shredded leaves or purchased compost, to annual beds, including vegetable gardens, every year. You can add up to 20 to 25 percent of the volume of the bed. Mixing it with the soil, dig the compost in at least a foot deep.

He also recommends that treatment for any new perennial bed. It's better to improve the soil over a wide area rather than simply to add compost to the planting hole of individual plants. That way, roots will grow throughout the bed, instead of huddling in the planting hole where the soil is best. However, when planting trees and shrubs, it's rarely a good idea to add any soil amendments to the planting. You want tree and shrub roots to range far and wide, so you don't want to give them any reason to stay close to home.

Regular soil tests let you know the pH of your soil — ideally neutral, or about 7 — and which nutrients it holds. The Plant Information Service can help you find a soil test lab.

Soil in Your Pots

What about potting soil? Drainage is even more important in the close confines of a container, Pollak says. Roots have no place to escape too-saturated soil. He recommends potting mixes designed to drain well, with ingredients that may include composted bark, perlite, compost, peat, or coir — shredded coconut fiber, an agricultural byproduct. The Chicago Botanic Garden now uses coir rather than peat in all its potting mixes, and Pollak has been pleased with the results.

Test any mix you use for drainage, Pollak says. Fill a good-sized pot, water it well, and within ten to 20 seconds water should be flowing out of the bottom hole. If not, that mix doesn't have enough spaces for water to flow through. (Of course, if you keep a pot on a saucer, always empty it so a pool of water doesn't block air from getting into the pot.)

With pots, which dry out so quickly, many gardeners' top priority is to not have to water too often.

Sub-irrigated containers that wick water up from a reservoir beneath the root zone are one answer. There also are synthetic crystals that can be mixed with potting soil to hold water and release it slowly (some potting mixes come with these).

Such alternatives have a place, Pollak says, in especially sunny locations or with small pots. But measure precisely and don't use too much, because the crystals expand greatly when wet. It's tempting to think if some crystals are good, more will be better, but you can easily find yourself trying to grow plants in a quivering mass of dirty gelatin. Coir has something of the same water-holding quality.

Heavy soil that stays saturated is no way to reduce watering; it will simply encourage roots to rot. That's why it's a bad idea to buy cheap "potting soil" you may see for $1 a bag in big-box stores. Usually it's just topsoil, sometimes scarcely more than construction debris. It's also not wise to use soil from your garden in containers, Pollak says, even if you mix it with plenty of compost and vermiculite. Garden soil is full of weed seeds, which will sprout as happily in a pot as in the ground. To save headaches, spend the money to get a reputable potting mix that is weed-free. However, it's not critical for potting mixes to be used for mature plants, Pollak says.

You don't need new potting mix every year, especially in large, hard-to-handle containers. Pollak recommends replacing it every two to three years. But you can't reuse it forever: over time, the organic matter in potting mix will break down into finer particles so it doesn't drain as well.

So before you start shopping for plants this spring, make sure you can provide a good home in well-built soil. Soil is one kind of real estate where improvement nearly always pays off. 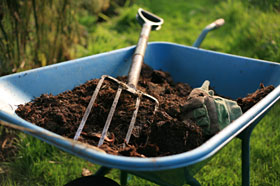 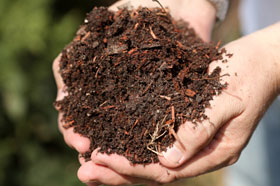 Good soil is is the absolute foundation for plants' success.

Add soil with organic matter or compost to garden beds every year. How much? Mix in up to 25 percent of the volume of the bed.