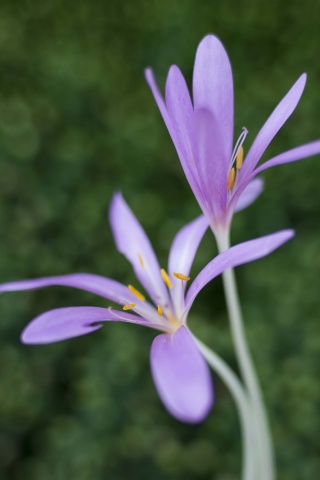 Imperial purple flowers make this among the most intensely colored of all of the Colchicum cultivars. The colors lighten up toward the center of the flower. It is typically one of the first of the Colchicum to flower, sometimes as early as late August.

Plant this cultivar in full sun and moist but well-drained soil. Divide it when the clumps of corms have become so congested that they start to push up to the surface of the soil. Interplant the corms with companion plants that begin growth late in the season to accommodate the luxuriant spring foliage and provide a backdrop for the flowers in fall. Examples include cultivars of Heuchera, Phlox paniculata, Hylotelephium spectabile, Sedum spurium, Festuca ovina glauca, Phlox subulata, and Thymus vulgaris.

All parts of the plant are toxic and should not be ingested. The toxins interfere with normal cell growth.

The genus name pays homage to the ancient kingdom of Colchis at the eastern end of the Black Sea, the modern nation of Georgia, home to very ornamental Colchicum species.