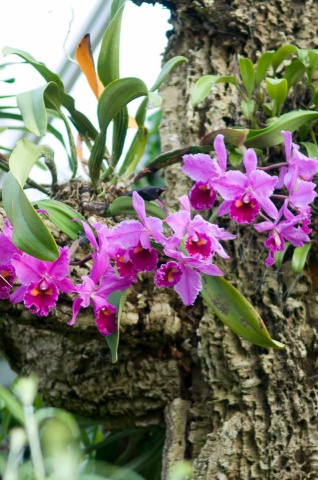 The first species in this genus to be discovered, it produces large, fragrant, showy white or orchid colored flowers during Chicago winters. For gardeners of a certain age, this was the favorite flower for high school dates. Difficult but not impossible to be grown by homeowners, the following approach has produced repeat bloom. Once temperatures in summer have warmed up, move the plants to a full sun location on the patio and water daily supplementing the water with dilute soluble fertilizer weekly. The plants should dry completely between waterings, ideally given early in the day. When temperatures begin to cool in fall bring plants indoors and place under full sun spectrum grow lights on a timer set for approximately 12 hours in a basement or other area where temperatures are cool but well above freezing. Plants will produce two flowers from each sheath produced at the tip of the pseudobulbs that were formed during the summer.

The orchid family consists of a large number of genera, each with its own unique characteristics. A common characteristic, however, is the basic form of the flower, which consists of three petals surrounded by three sepals -- often in dramatic and contrasting colors and in a variety of shapes and sizes. Although some orchids are native to temperate zones, most orchids tend to prefer a semi-tropical or tropical environment (USDA Zones 9-11) and have epiphytic roots -- meaning they derive moisture and nutrients from the air and support from another plant; few orchids grow in soil. Orchids usually prefer a diurnal temperature fluctuation -- meaning warmer days and cooler nights -- though the absolute temperature range (cool, intermediate or warm) varies by genus and is consistent with their natural habitat. While requiring adequate sunlight for a stunning bloom display, most orchids will not tolerate sustained direct sun.

Many varieties have pseudobulbs, a portion of the stem between leaf nodes that stores water to help sustain the plant through dry periods. Other varieties are monopodial, meaning upward growth is from a single growing point.

There is an exception to almost every general statement one can make about orchids. The family continues to challenge taxonomists.