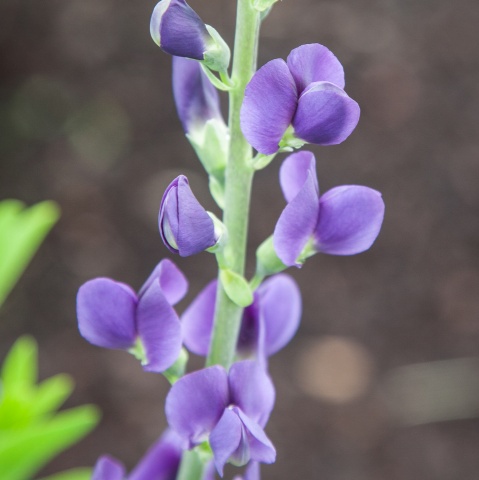 Royal Purple false indigo is a Chicagoland Grows® selection. Chicagoland Grows® is a plant introduction partnership of the Chicago Botanic Garden, the Morton Arboretum and the Ornamental Growers Association of Northern Illinois formed to promote plant cultivars that perform well in northern Illinois. This variety was developed at the Chicago Botanic Garden; it was selected for its incredibly saturated dark violet-purple flowers and vigorous growth. It is part of the PRAIRIEBLUES False Indigo Series.

Members of the genus Baptisia are commonly known as wild or false indigo due to their use by early Americans as a blue dye. Although "indigo" is in the common name, the blooms of native species may be blue, yellow or white and the blooms of newer hybrids may include lavenders and bi-colors. The late spring or early summer flowers emerge along long stems held above attractive foliage and are followed in the fall by dark pods. Overall habits of the plant are broad-rounded mounds to vase-shaped and range in height from two to five feet. Baptisia are considered easy-to-grow, sun-loving, long-lived perennials with very good drought tolerance once established.