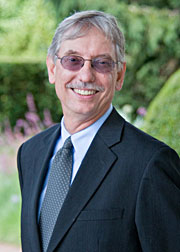 Dr. Gregory M. Mueller serves as vice president of science at the Chicago Botanic Garden, leading the development of academic programs at the Garden, including plant and fungal conservation science and research, graduate student training programs, and the Lenhardt Library.

Before joining the Garden, Dr. Mueller worked for more than 23 years at the Field Museum, most recently as the curator of mycology in the Department of Botany. He was chair of the Field Museum's Department of Botany from 1996 to 2005, during which time the department renovated its collections facilities, added lab and research space, and increased the size of its curatorial and professional staff.

Mueller's research focuses on the biology, ecology, and conservation of fungi, especially mushrooms, providing vital information for the management and conservation of temperate and tropical forests, particularly in the Chicago region, Costa Rica, Guatemala, and China. He has authored six books and nearly 100 journal articles.

He is a member of the International Union for the Conservation of Nature Species Survival Commission's Steering Committee; Chair of the IUCN Mushrooms, Brackets, and Puffballs Specialist Group; member of the Science Advisory Council for the Illinois Chapter of the Nature Conservancy, member of the Chicago Wilderness Executive Council, and member of the Mayor's (Chicago) Nature and Wildlife Committee. He also serves as lecturer, Committee on Evolutionary Biology at the University of Chicago; adjunct professor, Department of Biological Sciences at the University of Illinois at Chicago; adjunct professor, Biological Sciences, Northwestern University; and research associate, Department of Botany, the Field Museum. Mueller has served as president of the Mycological Society of America and as international coordinator for fungal programs at the Costa Rican National Biodiversity Institute.

Mueller received his B.A. and M.S. from Southern Illinois University, Carbondale, and his Ph.D. from the University of Tennessee. He undertook postdoctoral work at Uppsala University in Sweden and at the University of Washington in Seattle before joining the staff at the Field Museum.

Fellow, American Association for the Advancement of Science (AAAS)