Protecting the Fungus Among Us

Why Care about Fungi?

The Chicago area is host to more than a thousand species of mushrooms and mushroom like fungi—beneficial, symbiotic organisms, critical to the survival of our forests and grasslands. Some are edible, while others are toxic to humans. Yet, like native plants and animals, fungi are threatened by land use change, pollution, and climate change. 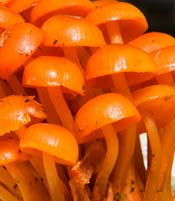 First, many fungi are nature’s most effective recyclers and decomposers. Without them, we would be buried miles deep in dead leaves and logs.

Other fungi are plant pathogens. In large forests that extend miles, older trees die to make way for new trees—it is a natural part of the life cycle. Forest fungi help this regeneration to take place.

Finally, many mushrooms and similar fungi form beneficial symbioses with trees such as pines and oaks termed mycorrhiza (Greek for fungus root). Neither plant nor fungus can survive without the other. Trees provide energy in the form of sugars to fungi. In exchange, fungi, with huge underground networks (the above-ground portion we see is just the tip of the iceberg), carry water, vitamins, and nutrients like phosphorous and nitrogen to the tree—even in drought conditions. In some cases, fungi's rootlike structures bind together like a strong cable and network several plants together so plants may share a limited nutrient or water supplies. As climate change impacts available water sources and cause other plant stress, this relationship will become even more important.

Mycologists (fungus scientists) have discovered only about 5 percent of the species that exist, and of those, only around 5 percent form these essential symbiotic relationships with trees. We need to preserve them so we can find out if more “power fungi” are hiding among the yet-to-be-discovered species. As conditions become more stressful for plants, we need these fungi to help plants survive. Thus, the need to study and conserve them.

What can you do to protect fungi in your own backyard?  Avoid over-tilling soil (fungal networks are generally found down to approximately nine inches deep). Avoid fertilizer where possible and use native plants. Fertilizer diminishes fungal diversity, while native plants host a wider diversity.

$ fungi: Ever wonder why some mushrooms (e.g., truffles, chanterelles, and morels) are so expensive—as much as several thousand dollars per pound? It is very difficult, if not impossible, to cultivate these fungi. So, each mushroom relies on the intricate symbiotic relationship between tree and fungus, plus soil and weather conditions. And, since they are found underground, they must be sniffed out by a trained dog or pig and picked by hand. 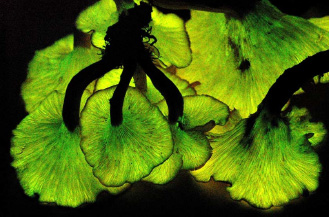 Fungi food: Imagine a world without beer, bread, wine, miso soup, pizza and even soy sauce—all made possible because of friendly fungi.

Rx fungi: Some types of fungi—penicillin and other antibiotics (infection fighter), and cyclosporins (anti organ rejection drugs)—are used around the world to fight disease and enable life saving organ transplants . Statins, drugs used to control blood cholesterol levels, were first isolated from fungi. Other types of fungi treat rheumatism, epilepsy, and gout; they staunch rapid blood flow, and may even battle cancer and heart disease!

Fungal weed control: Some fungi provide natural weed and pest control and can be used in your garden instead of chemical alternatives.

Fungi work in winter: Since they generate their own heat, their important decomposition work continues even when the mercury dips below freezing.

Glow in the dark fungi: Fungi can make their own light! Some species of mushrooms are bioluminescent, emitting eerie glows all the time (the glow can only be seen at night).

Note: It is safest to forage for fungi in the fruits and vegetable aisle, not the forest. If you do collect in the wild, be aware of and follow rules for collecting at that site, e.g., collecting fungi is not allowed on any forest preserve property in the greater Chicago region.