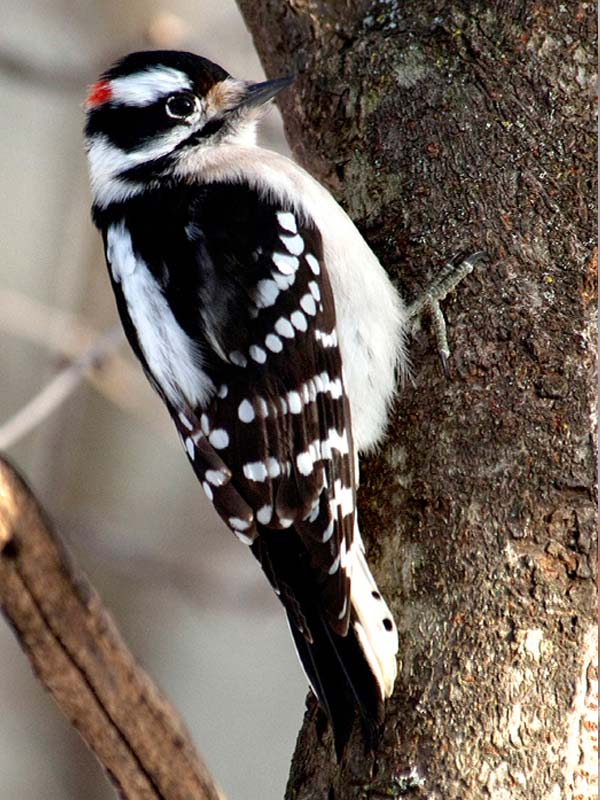 Description: The most common year-round woodpecker at the Garden is frequently spotted-especially in the McDonald Woods and Barbara Brown Nature Reserve.

Even on the coldest day in winter, you might see or hear a Downy Woodpecker give its whinnylike call in the woods at the Garden. This hardy, adaptable bird is built to get food left by other birds that leave town for the winter.

Woodpeckers can go up and down trees to find insects and larvae spending the winters in the bark. (Have you ever seen an oriole go up and down a tree? Doubtful!) To enable it to hold tightly onto the side of a tree, the Downy, like most woodpecker species, has two toes facing forward and two backward. Other songbirds such as orioles have three toes facing forward and one backward. The woodpecker's stiff, spiny tail helps the woodpecker stay balanced while it climbs up and down the bark looking for morsels.

The Downy, one of the most abundant woodpeckers in North America, also can get at food that larger woodpeckers cannot reach. It can cling to the stem of a plant and extract fly larvae out of galls, round protrusions that harbor these insects in winter. The strong, chisel-like bill enables a woodpecker to hammer a hole into the tough casing of a plant gall. (The oriole's pointed bill might get stuck.)

About 6 inches long with a 10- to 12-inch wingspan, this small woodpecker is black and white. The male has a red patch on the back of its head; the female has a black patch.

Sometime around the end of winter, Downy Woodpeckers start drumming to establish territories and attract mates. The female chooses a dead tree or branch, while the male excavates a cavity in the tree where the female lays three to six eggs. In spring, you might hear the noisy calls of young woodpeckers in the tree cavities hollering for their breakfast. Downy Woodpeckers are among the first northern Illinois species to nest in spring.

Woodpecker species, including the Downy, have some of the longest tongues on earth, compared with their body length. There's a reason for that. Long tongues reach farther into tree crevices to get at the goodies hidden beneath. But what does the woodpecker do with that long tongue when he's not using it? He wraps it inside his head around his skull. The best “human” example of a woodpecker's tongue wrapped around its skull is a retractable tape measure. Pull out the long tape, like a woodpecker's tongue, and it gets longer and longer. Let it go and it recoils inside the casing where you cannot see it. The woodpecker gives new meaning to the phrase tongue-tied!