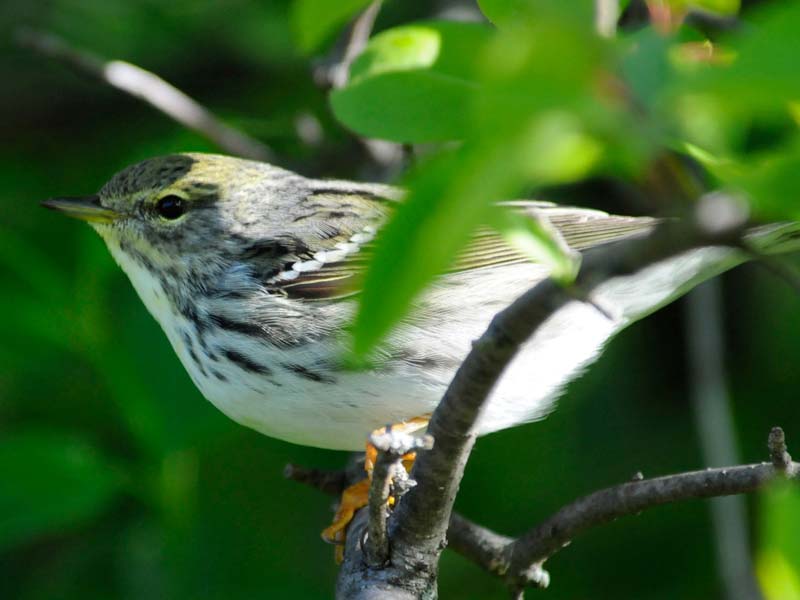 Description: Look in open areas like the Dixon Prairie, or elsewhere around the Garden, for this warbler that is common at the Garden during its long migration stopover.

One of the most ubiquitous warblers throughout northern Illinois and at the Garden during spring migration is an active, thin-billed bird called the yellow-rumped warbler. It's one of up to 36 warbler species seen in the area during the spring and fall migrations.

This warbler species is quite handsome and fun to watch. A spring male decked in his finest courtship attire is blue overall with a contrasting black breast and black facial pattern. It also sports a yellow cap on its head, yellow shoulders, and of course, the yellow rump. As with many migratory songbirds, the males come first, followed by the much duller-looking females, who have yellow rumps, caps, and shoulders, but lack the deep blue and black of the males.

The yellow-rumped warblers at the Garden are feeding and resting before completing their journey northward to breed in coniferous forests. The western counterpart has a yellow instead of white throat, and breeds in Alaska. At one time, the western counterpart was considered a separate species and dubbed the Audubon's warbler. But ornithologists today consider the yellow-rumped warbler and the Audubon's warbler the same species.

The yellow-rumped warbler moves with food availability and weather, and varies its winter range depending on yearly conditions. Its winter range extends from the southern United States to the West Indies and Central America. During mild winters a few yellow-rumped warblers may be in the woods or near conifers at the Garden. In spring, however, there are many more, and they'll be wearing their finest attire.

Though humans do best to stay away from poison ivy lest they have an allergic reaction, the yellow-rumped warbler enjoys this native plant. Iit eats the small, round berries that appear on the plant in fall. Poison ivy berries, in fact, are a big part of this species' diet in winter in its northern range. In addition, the yellow-rump is the only warbler species able to digest the waxes found in bayberries and wax myrtles, allowing the bird to winter farther north than any other warbler species.