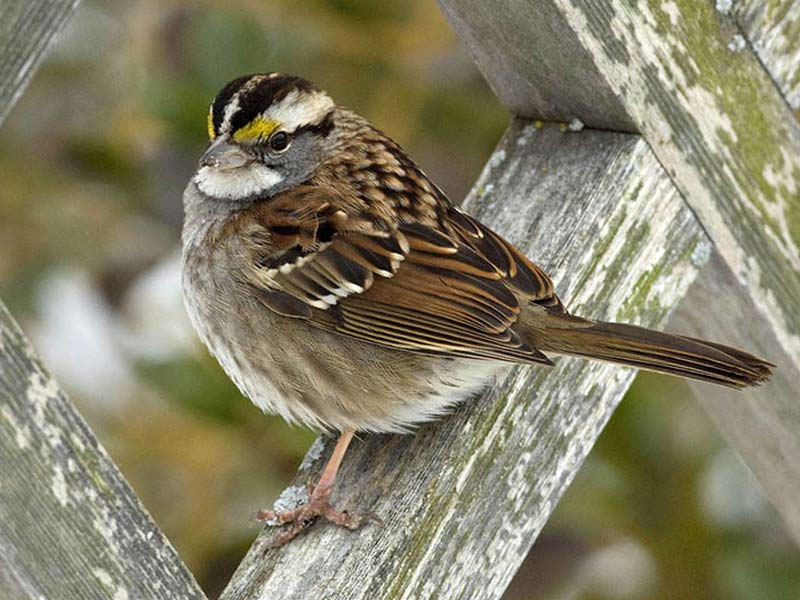 Description: The cheerful song of this common migrant and occasional winter resident is easy to recognize. Large flocks are often encountered in the McDonald Woods.

In fall, when many birds have stopped singing, the white-throated sparrow continues its melancholy refrain that sounds a bit like, "Oh sweet Canada, Canada, Canada." Perhaps some human thought the sparrow was reminiscing about its summer breeding range in Canada.

When migrating south in fall, the young of the year practice their songs with hoarse, wavering, unsure voices. Occasionally, an adult will answer with a more Pavarotti-like voice.

You can hear the migratory white-throated sparrows sing from brushy areas in the Garden in October, November, and December, and again in March, April, and May.

As beautiful as the song is, so is the plumage of this dapper sparrow. The adult male has a grayish body; a brown, striped back; and a chalky white throat with a bold, lemon-yellow patch above its eye. Its crown has alternating white and black lines, or in the tan morph, alternating tan and black head stripes. Females have similar, but duller plumage than the males.

The white-throated sparrow scratches leaf litter with its feet to kick up seeds and hiding insects. Berries also nourish this sparrow in fall and winter.

This autumn, take a walk through the McDonald Woods, along the prairie, or in gardens where there are some shrubs and leaf litter. You might be rewarded with a song or a glimpse of this handsome bird.