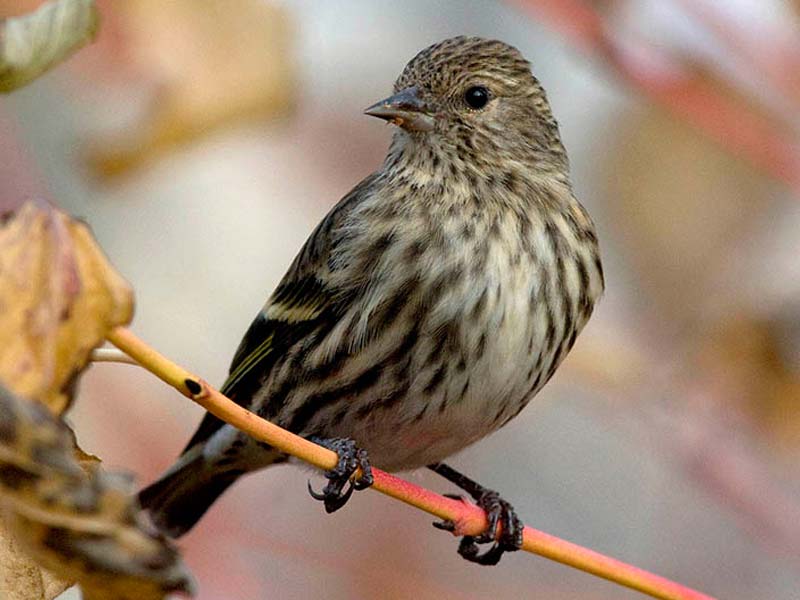 Description: Most winters, thanks to volunteer Peter Dogiakos, who fills homemade bird feeders with thistle in the Enabling Garden, Garden visitors can get close views of a northern bird species called the pine siskin. Gregarious little birds, pine siskins give rising, buzzy, “zreeee” calls as they sit in trees or fly to spruce cones and feeders to dine.

Pine siskins often hang out with American goldfinches, which are similar in shape and size. The siskins, however, have thinner bills and streaked bodies. They often sport yellow on their wing bars and tails.

Pine siskins belong to a group of birds known as winter finches. These birds live farther north in coniferous and mixed forests, feeding on seeds of coniferous and deciduous trees such as spruce, birch, and alder in winter. Seed crops vary from year to year, and when it's a particularly lean winter, the siskins fly south looking for food. They readily come to feeders filled with thistle seed.

Siskins were particularly numerous in northern Illinois during the winter 2008-2009 season, with dozens and dozens being seen at backyard feeders and in conifers at parks, gardens, and yards.  Siskins return to their northern breeding grounds in February and March, where they begin courting and choosing mates. During years of huge winter numbers, a few pine siskins may remain in Illinois to breed. The female builds a loose cup nest of twigs, grasses, and rootlets about 15 feet high in a conifer, lining the nest with feathers. She typically lays three blue eggs, and the young hatch in about 13 days. Pine siskins could very well be on nests in Illinois in March!

While winter is here, enjoy watching the antics of the siskins and their more common counterpart, the American goldfinch, as they vie for favorite perches on feeders and trees.

Pine siskins start courting and choosing mates as early as February. So if you're out at the Enabling Garden during the season of love, see if you can observe these behaviors: