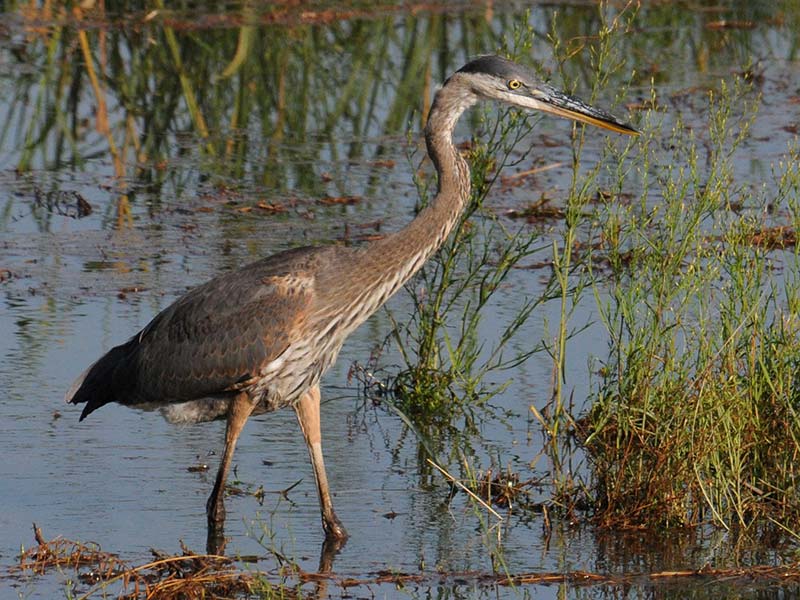 Description: This heron can be seen wading in water, spearing fish with its long beak, or flying over with neck and legs tucked.

One of the most peaceful summer scenes at the Garden is observing a great blue heron standing in one of the lakes.

The great blue stands 4 to 4 1/2 feet tall and has a blue-gray back; long, gray neck; and black and white throat. The heron stares intently at the water waiting for the perfect time to strike a fish or frog with its long, daggerlike bill.

Suddenly, the heron takes off, revealing its 6-foot wingspan and looking like a prehistoric flying dinosaur. In flight, the great blue can be confused with the similarly sized sandhill crane. But the heron holds its neck curved, looking like it is tucked into its shoulder, while the crane holds its neck straight and elongated.

The great blue herons you see at the Garden in late spring and early summer likely have flown from a rookery several miles away to find food to bring back to their young.

A rookery is a group of trees that contains a colony of herons and egrets. Rookeries consist of just a few great blue herons or hundreds of pairs, sometimes along with several other wading birds including great egrets and black-crowned night-herons.

In early spring, the adult great blue heron carries sticks nearly as long as its body length to build a nest or repair one used last season. If herons are successful in raising young, they’ll return to the same spot to nest each year.

A heron rookery can be a noisy, messy place with squawking young hollering for their dinner. When they see their parents return from their food-finding forays, the young get louder until mom or dad lands on the nest and regurgitates morsels of food into gaping mouths.

In August, most heron young have left their nests and are feeding on their own. They and the adults begin to gather in larger groups where food is plentiful. A few great blue herons may linger in northern Illinois during winter as long as they can find open water with fish.

Great blue herons swallow their prey whole. After stabbing its prey, the heron has to flip it until it's in the right position to go down the long way. The heron's throat bulges as the fish slides down. Sometimes the great blue heron's eyes get bigger than its stomach and the prey never gets down the bird's throat.