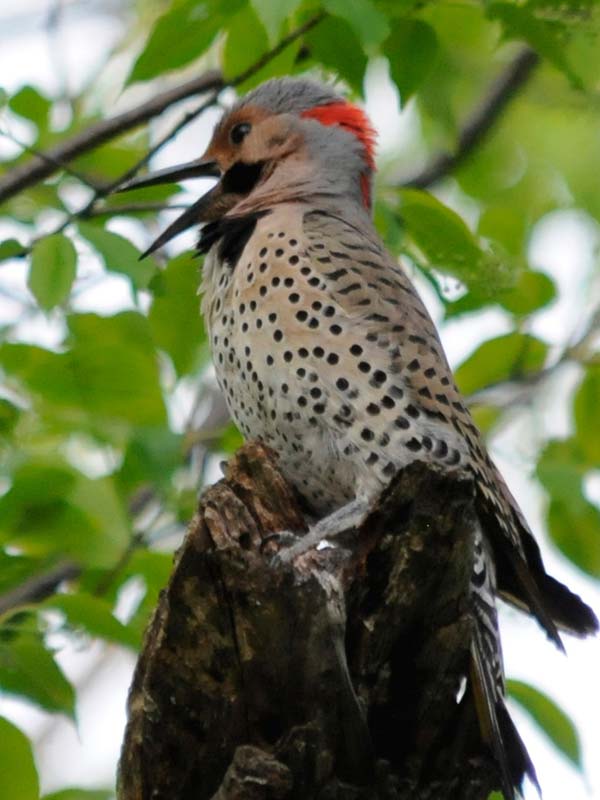 Description: This migrant woodpecker and breeder feeds on ants and can be found in any tree-covered area or on the lawn.

Unlike many woodland birds, the northern flicker produces a sound that seems to come from the jungle. Its loud, laughing, rapid “kick-kick-kick-kick-kick” song echoes through the woods, mostly in spring and early summer.

Identify the northern flicker by its barred back, black spots on a white belly, bold black chest bib, and red crescent on a gray neck. The male has a black mustache, and the female sometimes has a gray one. When the flicker flies, you can see a golden yellow color in its under wings, indicating that the bird belongs to the yellow-shafted race. Flickers with red beneath their wings belong to the red-shafted race and are found mostly in the western United States.

Flickers perform lively courtship rituals. They dance, bow, sway, and sing facing their intended mate. Once a pair is established, nest-building begins. Flickers carve a cavity in a dead or dying tree and then line it with wood chips. Five to eight eggs hatch in about 11 to 16 days. Both parents feed the young, bringing crushed insect morsels into their home in the tree cavity.

In autumn, flickers feed on the berries of poison ivy, Virginia creeper, and other fall fruits, as well as insects, including ants and grasshoppers in fields. They're quite common in September at the Chicago Botanic Garden. Most North American woodpeckers don't migrate, but some northern flickers do, especially those spending the summer in northern Illinois. A few may remain here depending on food availability. In September, you can often see small flocks of flickers traveling together and stopping at the Garden to feed and rest. They'll be back in April, among the bird species that can be called harbingers of spring.

Most woodpeckers chisel and pound on tree bark to find insects to eat, but the northern flicker especially loves ants. So this woodpecker prefers feeding on the ground, plucking its food from anthills, grassy meadows, and lawns. Flickers also squash ants and apply them to their bodies. Ants produce formic acid, which kills parasites on the bird's skin and feathers.