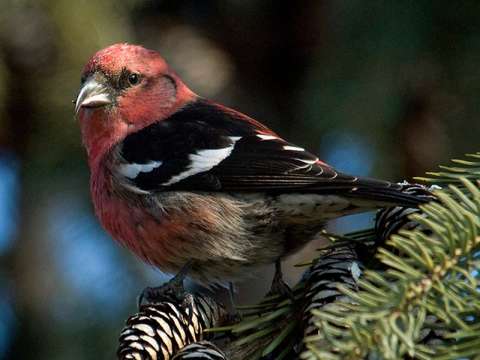 Description: The male is bright pink! Seeing a pink bird in an evergreen in winter is quite a sight. The crossbill also has white wing bars and a slightly crossed bill, which enables it to extract seeds from cones. Wherever there are stands of spruces and other conifers, a flock of crossbills may be feasting. They always seem to be on the fly, so finding them at the Garden is more difficult than finding siskins and redpolls. This rare member of the finch family has a bill specialized for extracting seed from spruce cones. Their appearance at the Garden is associated with variations in spruce cone abundance. Look for them around the conifers.