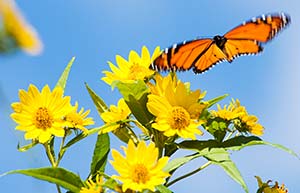 By 2050, the world could lose tens of thousands of plant species—with some estimates predicting a loss of up to one-third of the world's plant species (about 150,000).

In the United States alone, we risk losing 25 percent of the plant species that exist today. Of the millions of acres of native Midwest prairie that existed years ago, only a tiny fraction remains today. These fragments are in danger of disappearing completely, and with them, the birds, insects, and other animals that depend on them. Including us.

The disappearance of one single species is a lost opportunity: a chemical or genetic answer that could solve a medical problem or change the way we live.

All life depends on plants

Why should we care about what happens to the plants? Why does it matter?

We rely on plants for everything that sustains life: Air. Food. Clothing. Shelter. Clean Water. Medicine. A seemingly obvious fact, but one that most people do not realize. Now that you do, Join us. Save the Plants. Save the Planet.

Why are plants at risk?

There are many factors that are driving the endangerment of plants. Agriculture, urbanization, invasive species, pollution, and global warming have all played a role. According to the Intergovernmental Panel on Climate Change (IPCC) Fourth Assessment Report: Climate Change 2007, “A global assessment of data since 1970 has shown it is likely that anthropogenic (human-caused) warming has had a discernable influence on many physical and biological systems.”

The report, compiled by leading scientists worldwide, is comprehensive in scope, compelling in message: the world is warming up and we humans are to blame. Our impact on this earth is having profound repercussions, changing the planet as we know it.

The reports are serious, but not hopeless—if we act now. Learn more about the issues and the role the Chicago Botanic Garden is playing in protecting the world’s plant species.