What is it about red? At a party, it's the red dress that turns heads. On the highway, it's the red sports car. In the prairie, it's the rare cardinal flower in a sea of goldenrod. And when the woods take on a golden glow, the flame of red is what makes an autumn spectacular.

Trees and shrubs whose leaves turn red are the secret divas of woods and gardens. Through September, they may modestly blend in with the crowd. But as nights turn cool, they drop the bashful act and step to center stage.

Fall color is not something trees put on, says Andrew Bell, curator of woody plants. It's something they reveal. The pigments — anthocyanin for reds, carotenoid for yellow — are always there, masked during the growing season by green chlorophyll. "We see the green more readily than we see the other pigmentations in the leaves," Bell says.

But as days grow shorter, chlorophyll breaks down and the underlying colors are unveiled. When an autumn offers clear, sunny days and cool nights, tree color tends to be more vivid, because chlorophyll retreats sooner and more thoroughly.

Of course, it's not forever. The trees have stopped making chlorophyll because they are done with this season's leaves and ready to let them go. The show is a short one. But in a good year, it's eye-popping.

Among the shining stars is sumac. "It's at the top of my list," says Bell. "Sumac is the one that is just so spectacular." On Evening Island, staghorn sumac (Rhus typhina) sports fuzzy red drupes, or flower clusters, holding them like torches above its blazing foliage.

Another red dazzler is black gum (Nyssa sylvatica), found along the East Road and in the Visitor Center parking lot, as well as in the Rose Garden. And of course Japanese maples, with many cultivars carefully bred for spectacular reds, are planted throughout the garden, especially in the Elizabeth Hubert Malott Japanese Garden. They are also to be found near the Model Railroad Garden, Bell notes, handy for explaining to children why trees change color in the fall. The Garden is fortunate to be able to grow these lovely small trees; in more exposed USDA Zone 5 sites farther from Lake Michigan, they may not be hardy.

The walls of the English Walled Garden are cloaked with Boston ivy (Parthenocissus tricuspidata), which will cloak a house or a fence almost too enthusiastically. It is neither a true ivy, nor from Boston (it's native to China and Japan), but it can call itself anything it wants as long as it wears that red. The related Virginia creeper (Parthenocissus quinquefolia), which is native to the U.S., is often the first bright red flame in the woods in fall and can be just as boisterous as its cousin in the garden.

Among large shade trees, there are red maples (Acer rubrum) and several cultivars of hybrid Freeman maples throughout the garden.

The lust for red can lead us astray. For more than a century, one of our most popular garden shrubs has been burning bush (Euonymous alatus), beloved for its explosion of pinkish red in autumn. Unfortunately, birds love its berries, too, and spread them everywhere, making burning bush an invasive threat in natural areas where it can out-compete native plants.

If you can't bear to part with a burning bush, Bell suggests shearing it each year right after it blooms. The bush still will turn red in the fall, but it will not have a chance to set those pernicious berries.

Berries and fruit are, of course, another place that red pops. And fruit, whatever its color, attracts a delighted chorus of birds.

Some species of flowering crabapple, such as Siberian crabapple (Malus baccata), Sargent's crabapple (Malus sargentii) and Zuni crabapple (Malus x zumi) are notable not just for their spring flowers, but for bright fruit that persists into fall and winter. Red chokeberry (Aronia arbutifolia) is a hardy native shrub valued for its red berries; find a grove of chokeberries in the Woman's Board of the Chicago Horticultural Society Rainwater Glen around the Daniel F. and Ada L. Rice Plant Conservation Science Center, if you venture across the new Trellis Bridge from Evening Island. Winterberry (Ilex verticillata) can be found in the Sensory Garden. And if that's not enough red for you, take a tram tour and admire the hawthorns (Crataegus viridis) from an unprickly distance.

The time is now to enjoy the reds of autumn. Before long, the curtain will fall on this spectacular spectacle, leaving us to search for red in the bark of redtwig dogwoods and coral bark willows...until the tulips bloom. 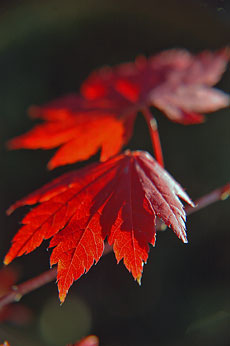 Fall color is not something trees put on, it's something they reveal.