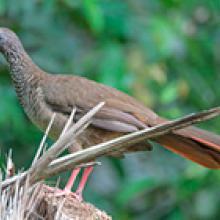 Learn about the birds of Brazil in a special Brazil in the Garden presentation from Doug Stotz, senior conservation ecologist at The Field Museum.

Brazil is the fifth largest country in the world. Its area is larger than the lower 48 states of the United States combined. It is one of the most biologically diverse countries in the world, home to most of the Amazon rainforest, as well as biogeographic realms as distinct as the Caatinga, a desert region, the vast savannas of the Cerrado, and another major area of tropical forest, the Atlantic Forest of eastern Brazil. A tropical forest with species of birds found no place else in the world exists on the very outskirts of the megacities of Rio de Janeiro and São Paulo. Brazil, ranked third in the world for most bird species, has more than 1,800 known species of birds.

In his talk, Dr. Stotz will survey the avifauna of Brazil, discussing geographic and ecological patterns in this fascinating country. He will also consider the conservation threats that face this country of rapid development and discuss some of the answers to those threats.

Dr. Doug Stotz is active in programs to preserve biological diversity and threatened habitats, both in the Chicago region and in other countries. In Chicago, Dr. Stotz focuses his attention on studying bird migration and the effects of climate change on bird populations. He is a co-chair of the Climate Change Committee for Chicago Wilderness. He also has a history of research and exploration in South America across 35 years. Stotz did his dissertation research on the ecomorphology of antwrens throughout Brazil, and then spent two years at the Museu de Zoologia of the Univeridade de São Paulo as a post-doctoral researcher. As part of the Field Museum’s tropical Rapid Biological Inventory teams, Stotz has participated in more than 25 inventories in Peru, Ecuador, Bolivia, and Cuba as well as one in China.

Stotz is an author of two books on Neotropical birds. Birds of Peru is a landmark fieldguide to the more than 1,800 species of birds in Peru. Neotropical Birds: Ecology and Conservation provides information on the distribution and ecological patterns of over 4,000 Latin American birds, and uses that information to analyze conservation priorities.

Stotz also researches the ecological basis for geographic patterns of species diversity and endemism, especially along elevational gradients. He is a member of the American Ornithologists’ Union’s Checklist Committee for both North and South America, responsible for the taxonomy and English names of the birds of the Americas.