This time, Spike nails it.

Drop by the Semitropical Greenhouse during regular visitor hours to take a deep breath and celebrate one of the plant kingdom’s most glorious events. The corpse flower usually stays in bloom for 24 to 36 hours. Save time and buy parking in advance.

Spike is back—and rockin’ the bloom.

Will you pollinate Spike?

When Spike flowers, we will collect pollen for future use, but we do not plan to pollinate Spike. Spike has the same parents as Alice, another titan arum that bloomed in 2015. (We successfully pollinated Alice and obtained numerous seeds.) It would be better to pollinate one of our plants that come from different parents in order to promote genetic diversity.

What’s different about Spike this time?

Spike started this second bloom cycle only two and a half years after the first one. Usually, it takes three to five years for a plant to “recharge” and flower again, so Spike was on a faster pace. We’ll study the data, compare the numbers to Spike’s first bloom cycle, and see what that all means.

Yes; on a memorable day in August 2017, Sunshine opened up on the same day as the partial solar eclipse. The Garden began collecting titan arums in 2003, as part of a worldwide conservation effort to preserve the species. Many of our titans were acquired at the same time, which is why the Garden has had several ready to bloom in a short time period. 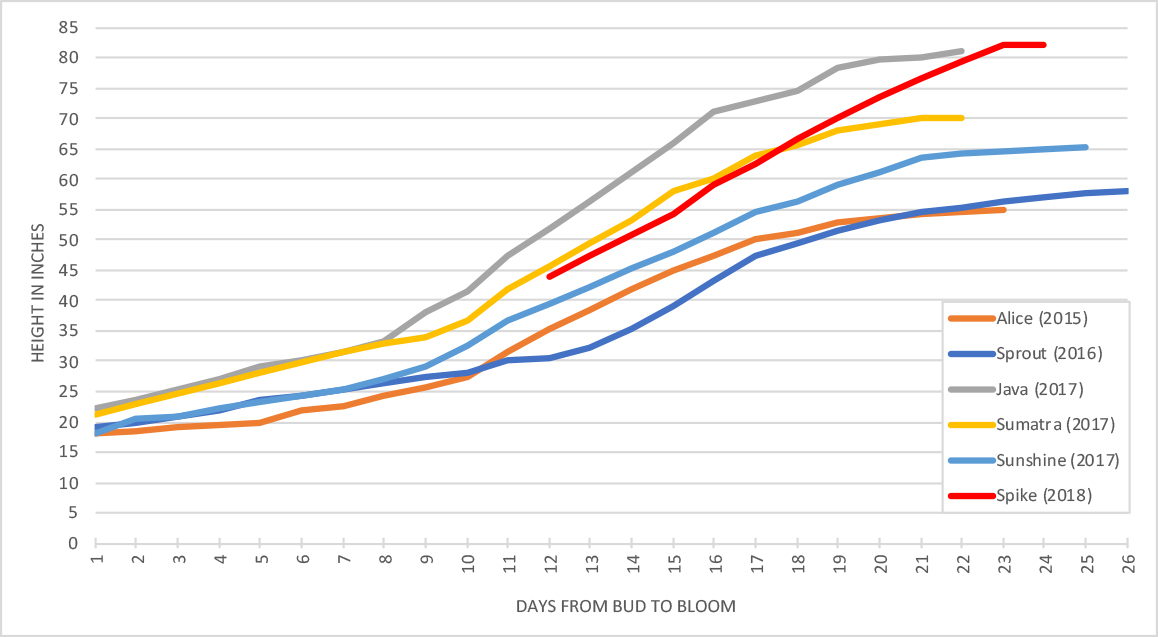 See Spike at the Garden

Visit often, bring the kids, spread the word! The corpse flower is a wonderful way to learn and teach about plant science.

Selfies with #CBGSpike are encouraged (sorry, no tripods).