The July 2014 groundbreaking for a new tree nursery on the Kris Jarantoski Campus.

The beauty and wonder of plants are integral to a living museum such as the Chicago Botanic Garden. A new plant production facility and display garden on the Kris Jarantoski Campus will ensure the Garden's ability to maintain and even redefine horticultural excellence, support advanced plant conservation research, and expand its highly successful plant-based education programs. The campus is named in honor of Executive Vice President and Director Kris Jarantoski's guiding vision. Jarantoski's honors include the American Horticultural Society's Professional Award, the Honorary Life Member award from the American Public Gardens Association, as well as the 2015 Arthur Hoyt Scott Medal and Award.

Integral to the Jarantoski Campus is a garden designed by Wirtz International. The innovative landscape design will unite the Garden's south end, including the plant production facilities and the Daniel F. and Ada L. Rice Plant Conservation Science Center, with Evening Island and the Dixon Prairie. It will also balance the Learning Campus on the Garden's north end. When complete, the Jarantoski Campus will transform this part of the Garden, little known by the public, into a major destination.

LONG-TERM PLANS AIM FOR DRAMATIC EXPANSION OF GREENHOUSES AND NURSERY About 250,000 plants—annuals, perennials, flowering bulbs, and wood plants—make their way through the Chicago Botanic Garden's production area each year. It may seem like magic to people strolling through the 27 distinct gardens, but members of the plant production team are more like conductors than magicians. They must organize all the players—pots, seeds, soil, bulbs, greenhouses, heaters, fertilizers, watering systems, and much more—to create memorable performances for the Garden's one million annual visitors.

The Garden's gorgeous plant displays are the result of horticultural ingenuity, meticulous planning, and patience. But the demand for more and unusual plants has strained the existing, aged production facilities, which are in dire need of overhaul—they are the same size now as they were when there was only one display garden and a collection of 100,000 plants. In response, the Garden has made the renovation and expansion of the plant production facilities one of its highest priorities.

New energy-efficient greenhouses will increase the indoor growing space from its current 18,000 square feet to more than 55,000 square feet. The structures will have 26 climate-controlled zones compared to the 11 currently in place, and the new outdoor nursery space will be 151,000 square feet. One of the most important improvements will be an orchidarium comprising four new orchid houses; these orchid houses will allow the Garden to grow and maintain an unusual collection of orchids and tropical plants. In addition, new bonsai studios with four different environments will enhance the Garden's already renowned Bonsai Collection.

The Wirtz landscape plan includes the Serpentine Garden, with both a specialty shade-plant evaluation area and a rose evaluation area, and an interpretive walk. The strolling garden will meander the length of the greenhouses and nursery, leading visitors through bald cypress trees, dawn redwoods, and European beech hedges, without revealing what lies beyond the next curve. The interpreted views into the nursery and greenhouses will allow the public to see the fascinating techniques used in the art and science of horticulture.

A Bit of Perspective 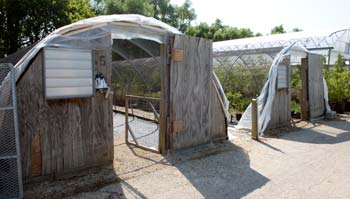 Annuals, perennials, tropicals, bonsai, orchids, and seedlings of rare plants are now crowded into an assortment of greenhouses, some built in 1969 and others that were donated used in 1981. New energy-efficient greenhouses will increase the indoor growing space from its current 18,000 square feet to more than 55,000 square feet.

The first phase of the plant production facilities project was completed earlier this year, with the in-ground nursery moving to a new location on the south campus during the summer of 2014. The nursery construction will be complete by 2015. Additional phases will be undertaken as fundraising proceeds. So far, $25 million has been raised, and another $15 million is needed to complete the Jarantoski Campus.

The Jarantoski Campus and its components are part of Plants for Life 2020: The Keep Growing Campaign for the Garden. The $125 million capital and endowment initiative includes $40 million for the Jarantoski Campus. The projects included in the initiative will enable the Garden to continue to engage, educate, and inspire, and to improve the health of plants and ecosystems close to home and around the world. 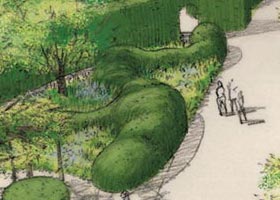 Click here to read more about Wirtz International's plan for the greenhouse and nursery expansion.