One of the Chicago Botanic Garden’s most enchanting and popular places is the Helen and Richard Thomas English Walled Garden, which was designed by renowned English landscape architect John Brookes, Member of the British Empire (MBE). Step past the sleepy stone lion, breathe in the cowslip primrose, and listen to the water trickle into an eighteenth-century lead cistern—the feeling is as timeless as the tiny thyme plants growing between the hand-pressed bricks.

Each of the six unique garden rooms evokes a different mood, featuring elements of English garden design through the centuries. Try the Cottage Garden—overflowing with fruits, vegetables, herbs, and flowers—for a sense of playfulness (Beatrix Potter, anyone?); or the wisteria-covered Pergola Garden—with flowers and foliage in cool blues, purples, and silver—for a sense of romance (Jane Austen, anyone?).

Through generous funding from the Woman’s Board of the Chicago Horticultural Society, the English Walled Garden has been updated periodically. Enhancements are made in consultation with Brookes, who most recently toured in the garden in 2012. As a result, a restoration project is underway that includes a plan to rethink the plantings and overhaul the perennial borders.

In designing the English Walled Garden, Brookes said his intent was to present a typical period-style English country garden that would evoke as many of the senses as possible. The garden “should be visual, of course, with color, but also scent and texture in the planting, and a feeling of it all not being too immaculate,” Brookes said. “Plantings should be full and almost overflowing their borders. It should be a joyous and restful place above all else. 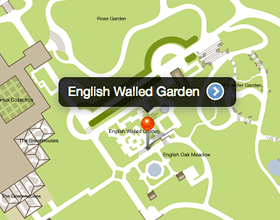