See what happens when you drop by the Bonsai Collection—among the best of its kind in the world—at different times of day. One morning, you might note the cinnamon scent of the Asian star jasmine (Trachelospermum asiaticum)—and then return after sunset when its fragrance intensifies. And you might consider the essence of the cascade (kengai) bonsai, backlit against the evening sky. Is it arching over the rim of its container toward the ground, or is it growing toward the disappearing sun?

The Chicago Botanic Garden’s collection of nearly 200 bonsai includes gifts from the Midwest Bonsai Society and from Japanese bonsai master Susumu Nakamura. Among the trees donated by Nakamura was a Japanese white pine that has been trained for at least 100 years. On rotating display, each bonsai takes the stage at the peak of its beauty. The select bonsai are on display in the Regenstein Center’s two courtyards from roughly April 1 to October 1, depending on the weather. 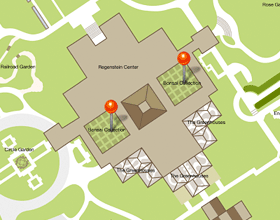