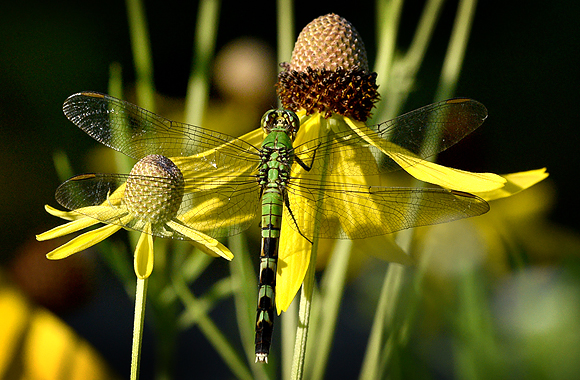 Eastern pondhawk dragonfly, female. Most dragonflies have very different-looking males and females. This one was in the Native Plant Garden. Photo ©Carol Freeman.

Some of the dragonflies migrate south toward the Gulf Coast through September and maybe beyond. With the help of citizen observers, scientists are studying the migration patterns of this fascinating insect, which has a near 360-degree field of vision that helps it avoid predators.

The most abundant dragonfly I’ve seen is the eastern pondhawk, with blue dasher dragonflies coming in a close second. I’m also seeing quite a few damselflies, which are generally smaller and more thin-bodied than dragonflies and tend to hold their wings above their bodies. (See my blog post Damselflies 101 for more information.) 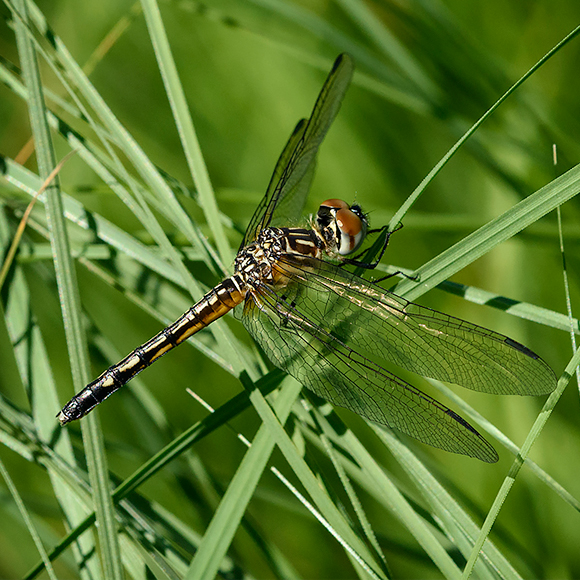 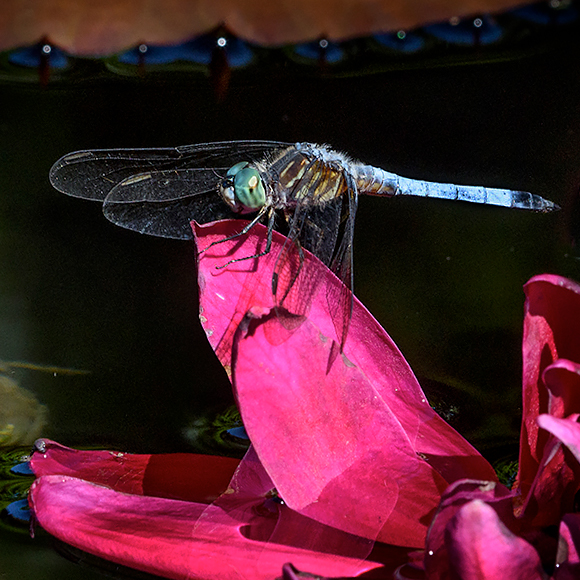 Dragonflies and damselflies, both in the order Odonata, can spend several years as aquatic nymphs before they emerge into the beautiful winged insects we see on land, which is why you will often see them around water. They are fierce hunters in both stages. They don’t bite or sting humans, though. 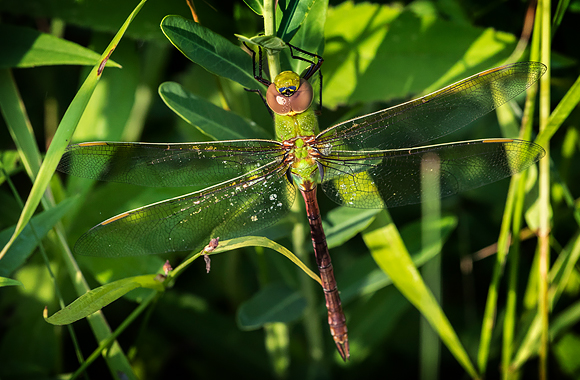 The common green darner dragonfly is one of the first dragonflies to emerge in the spring, and one of the species that can be found migrating in huge swarms in the fall. Photo ©Carol Freeman.

Dragonflies can be found here from March through the first hard freeze in the fall. Choose the right time to visit, and you might even be lucky to find yourself in the middle of a migrating swarm of green darners, black saddlebags, or wandering gliders as they head south. About 90 different odonates can be found in the Chicago area. Each one is a delight to behold. 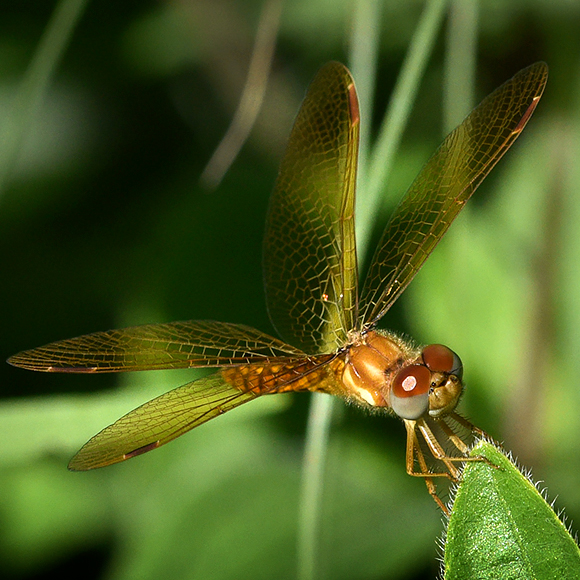 Eastern amberwing dragonfly, male. This is one of the smallest dragonflies in our area, at just more than 1 inch long. Photo ©Carol Freeman. 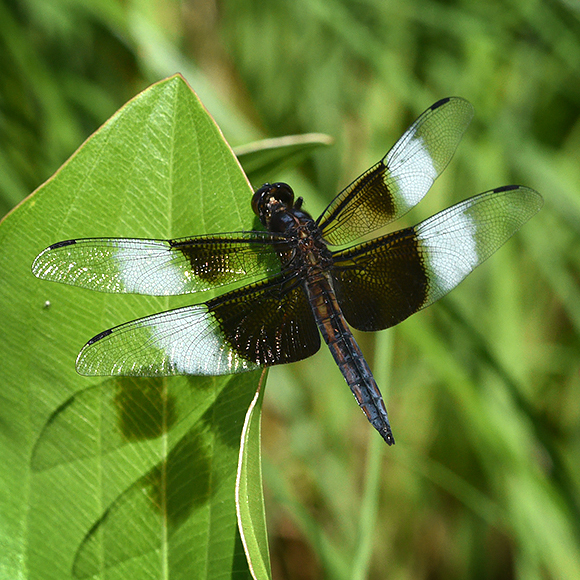 Widow skimmer dragonfly, male. This is one of the larger, flashier dragonflies, and it is easy to identify. Photo ©Carol Freeman. 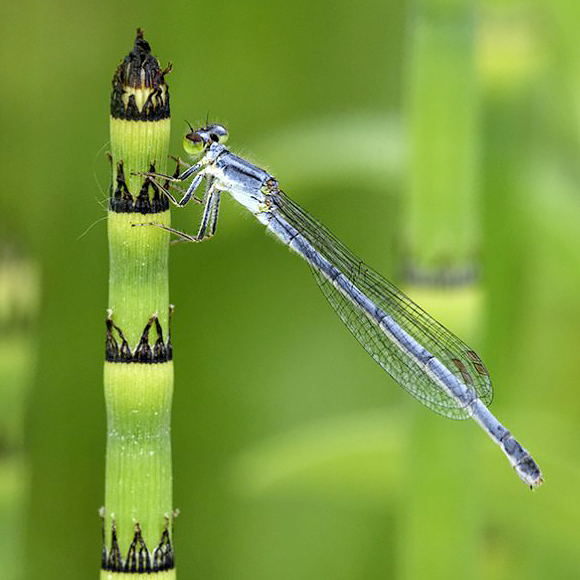 Eastern forktail damselfly, female. This is the most common damselfly in our area, and it can be found in the Dixon Prairie. Photo ©Carol Freeman.

Dragonflies are territorial and often chase off other dragonflies, only to return to their favorite perch. A favorite place to find them at the Garden is around the waterlilies and lotus blossoms, but you can spot them throughout the 385-acre grounds. Drop by and keep an eye out for the dragonflies near the late-summer blooms. 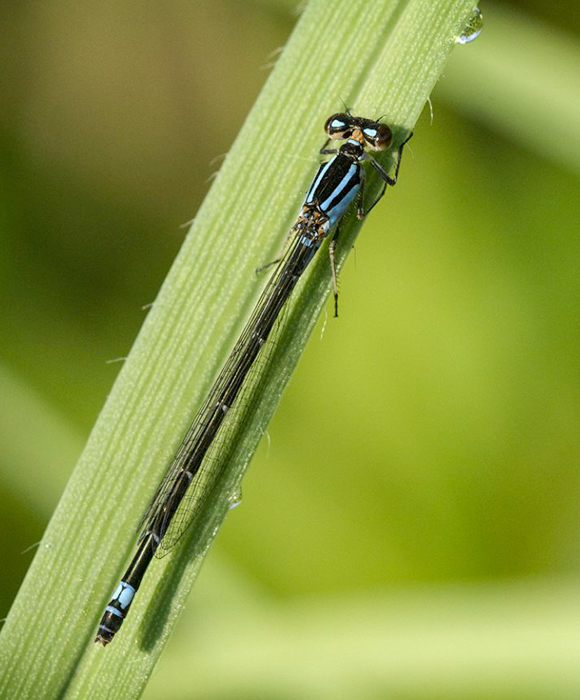 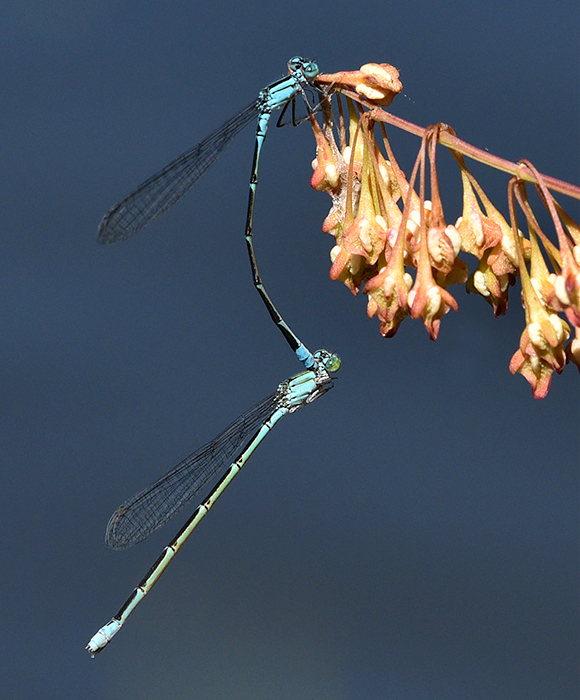