“Titan Tim” Reflects on the Power of One Plant

“Titan Tim” Pollak here, with some thoughts about Spike the corpse flower as he goes into dormancy. I never thought I’d call myself “Titan Tim,” but Spike has forever changed my life—as he did life here at the Chicago Botanic Garden—during the four weeks he was on display in our Semitropical Greenhouse.

Spike brought the nation’s—and even the world’s—attention to the Garden, as we waited for our first-ever flowering titan to open up in all its stinky and colorful glory. The event—and I am proud to call this an event—brought more than 76,000 visitors to see Spike (8,200 people alone on Sunday, August 30, when we manually opened up the flower), making it by far the largest event in the Chicago Botanic Garden’s history.) In addition, there were 948 television and radio stories broadcast and 126 online reports, reaching an unbelievable 173,884,617 estimated people!

I myself did 42 interviews regarding Spike, including television, radio, print, and internet. And I wrote seven blogs along the way, telling the story, history, origins, care, and details about the smell of Amorphophallus titanum, the world’s largest unbranched inflorescence.

During all of the “Spike-mania,” I was often asked if I was getting any sleep. My answer was “Not so much!” Spike became a member of my family, a sort of adopted son that I referred to as “him,” “he,” “mine,” and “ours” in conversation. During those weeks, Spike became my life, 24/7, day and night…and I became “Titan Tim,” for sure.

The power of one plant…Wow!

“When is he going to bloom?” That was the number one question on everyone’s mind, both at the Garden and from visitors. As you know by now, Spike didn’t have the energy to bloom by himself, as we thought he would. (Read the story about it here.)

Finally, we decided to manually open the spathe to check on the viability of the male and female individual flowers inside. If healthy enough, we could attempt to pollinate the female flowers with donor pollen from recent titans at the Denver Botanic Gardens and California’s Huntington Library, Art Collections, and Botanical Gardens. We also wanted to collect the pollen produced by Spike’s male flowers, to preserve some here for the future, to donate to other institutions, and to contribute to global genetic diversity.

We knew we would be giving our visitors a very rare opportunity to see the internal flower structures up close—to observe, touch, feel, and even smell a procedure that has rarely ever been done. What a teaching moment it became! (Spike taught the world about pollination.) At that point, horticulture and science met in the transparency of the public eye. Our horticultural staff had nurtured and cared for Spike for 12 years. Our scientists had long been working to bring attention to the endangered and threatened plant species of the world. And the public was curious and enthusiastic about learning the facts about a “huge, rotten, and rare” phenomenon.

That morning, I experienced the power of one plant—an experience that will stay with me for the rest of my life. Despite the disappointment, Spike was a success: he was a rock star and a hero to the botanical world.

To all of Spike’s Garden friends 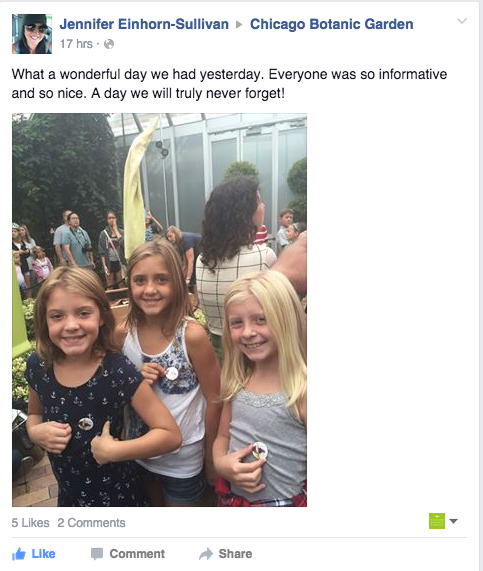 To still have people coming by and asking questions well into the week after Spike’s spathe was removed was pretty remarkable.

The other amazing experience for me was with Spike’s visitors, fans, and “groupies.” He had such a large following, and I often saw some of the same people visit day after day! I heard and received so many positive comments from visitors. People said that Spike was part of daily dinner conversations—that they would converse about when he was going to bloom, how tall he was going to get, and so on. Spike had become a household name! Many of you were devoted watchers of the streaming live cam on our website and on YouTube, and many wrote to say that you saw me every morning checking on him, measuring him, touching him, and smelling him. It was wonderful and humbling, and it made me feel like a proud papa to Spike!

I want to share with you just a few of the many wonderful comments I received via e-mail and in response to my blogs:

From Richard F.: “The live cam provides a wonderful tool to watch the flowering progress 24/7. Thank you for this initiative.”

From Chicago Catt: “It’s fascinating. Thank you for bringing this to Chicago!”

From Marjorie R.: “The anticipation is killing me! I’m going to be one of those people showing up at 2 a.m. I have been watching the webcam online every day at 2 a.m. to check on him!”

From Nicole R.: “Tim, I need to know: Are you sleeping with Spike these days? …Please assure us you are there, encouraging it, protecting it, and maybe even hugging it from time to time.”

From Heeyoung K.: “Dear Tim, First of all, I was amazed how you and your team turned Spike’s sad ‘failure’ to bloom into (an) even more wonderful learning experience with heartwarming support from so many people. I would say that was (the most) monumental event that has ever happened to a ‘mere’ plant :).”

From Lynn Q.: “Even though Spike didn’t bloom as we all hoped…the whole ‘Spike experience’ orchestrated by the Garden and all of the specialists working with Spike was just fantastic. I loved learning about these plants through frequent visits and reading the information on the website. Best of all was the opportunity to monitor growth through the live cam: we viewed Spike from time to time at home. Thus, I write to thank you and encourage you on the next efforts with these amazing plants!”

Thanks to all who wrote and reached out to me during Spike’s time on display. From myself and all of us at the Garden, we simply can’t thank you enough.

The silver lining in the story of Spike is that we have more titans to come. Seven other Amorphophallus titanum plants are in various stages of leaf, dormancy, and growth in our production area, and sooner or later another will be on display for you all to come and experience. Keep checking our website for updates on these rare and unusual plants.

The corpse flower will return in the future…and so will “Titan Tim.”