Project Overview:
Shannon Still and Nick Jensen work on a project studying the impact of climate change on the distribution of rare plants in the western United States. The grant, funded through the Bureau of Land Management (BLM), examines the changes in projected species distributions between now and 2080. The goal of the research is to help BLM to make informed management decisions regarding rare plants. The research takes them to many exciting destinations searching for rare plants in the west. 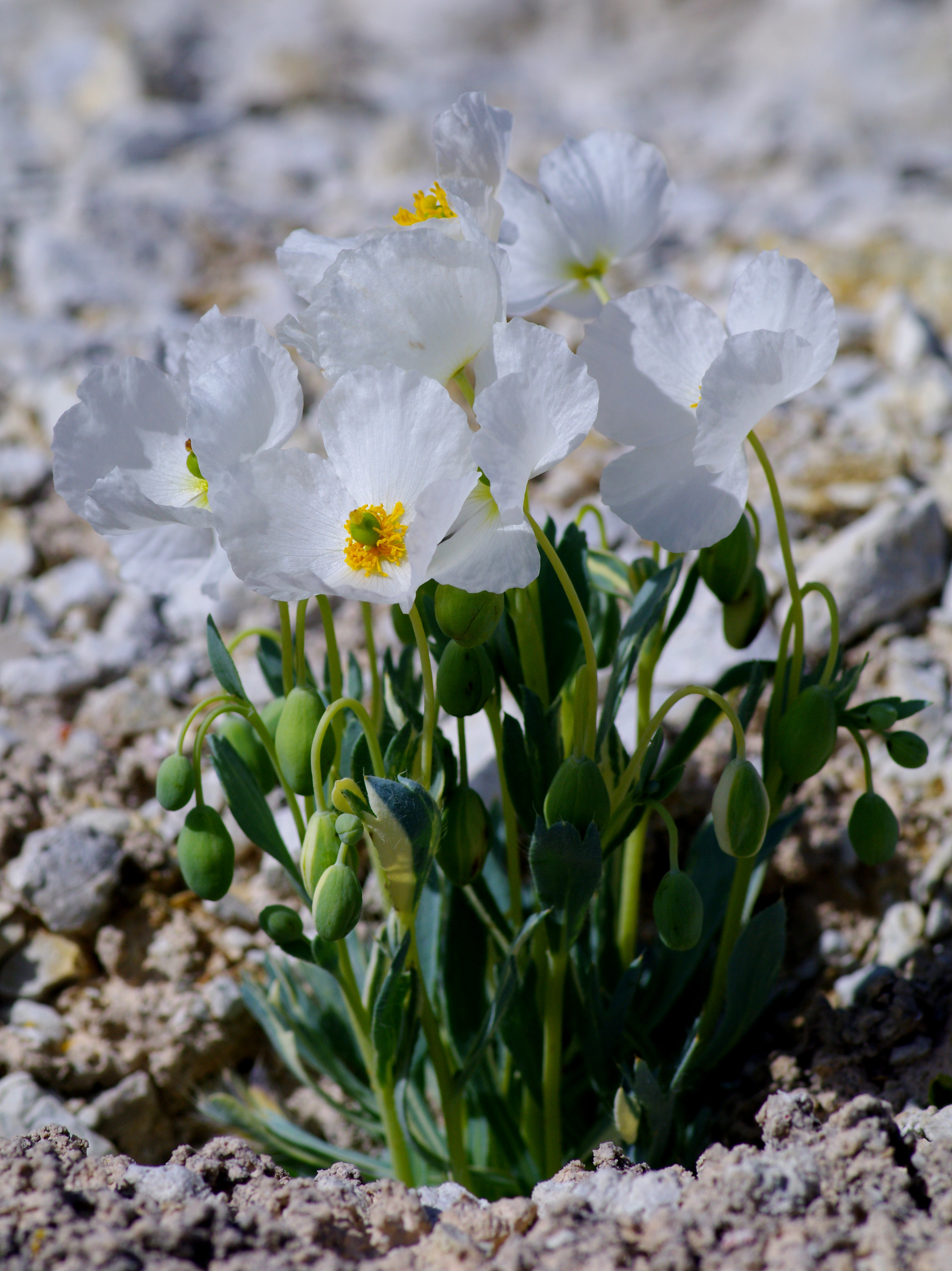 The genus Arctomecon (also known as bear-poppy), contains three beautiful species restricted to southwestern North America. In this exceptional genus, dwarf bear-poppy (Arctomecon humilis) is the rarest — and perhaps most remarkable — species, due to its profusion of delicate white flowers and unique habitat.

In many ways, the dwarf bear-poppy is a poster child for rare plant conservation. It is restricted to a small area in southwestern Utah close to the Arizona border, near the city of St. George. A stunning plant, it grows in a notably hostile habitat — it is not uncommon to find this species growing completely alone on gypsum soils on steep, exposed hillsides and ridges.

The “claws” at the end of each leaf

Dwarf bear-poppy is topped by a mass of white flowers in late April and early May that often cover the entire plant. Each flower consists of four delicate, white petals surrounding myriad yellow stamens, all of which sit atop a plump green, round ovary. Unopened, graceful, green flower buds droop, waiting to open. When looking out over this landscape, backlit plants in full bloom seem to glow in the early morning or late afternoon light.

A close inspection of dwarf bear-poppy’s hairy leaves with their three “claw-tipped” teeth at their apex sheds light on the origin of bear-poppy as a common name for these plants. Everything about dwarf bear-poppy exudes beauty.

Delicate flowers of the dwarf bear-poppy

It is found in approximately ten locations in Washington County, Utah, and is listed as an endangered species by the U.S. Fish and Wildlife Service. Dwarf bear-poppy is threatened by development, mining, and off-highway vehicle (OHV) damage to its habitat. The dwarf bear-poppy grows in soil that forms a thick, crunchy, structurally-complex biological soil crust that is rich in gypsum. The habitat is easily damaged by hiking, grazing, and OHV use and is slow to recover.

OHV damage to the habitat

The habitat for the dwarf bear-poppy in the photo shown below has not had OHV activity for at least seven years (and likely longer) and still shows signs of heavy damage. In fact, full recovery of a soil crust can take up to 250 years, so a little damage can have long-lasting impacts. Therefore, conservation efforts have included fencing as well as the establishment of nature preserves, managed by The Nature Conservancy, to prevent further OHV damage.

Dwarf bear-poppy is a strikingly beautiful, rare, and threatened species. Conservation and restoration efforts should ensure that it continues to be a botanical treasure for future generations to cherish. 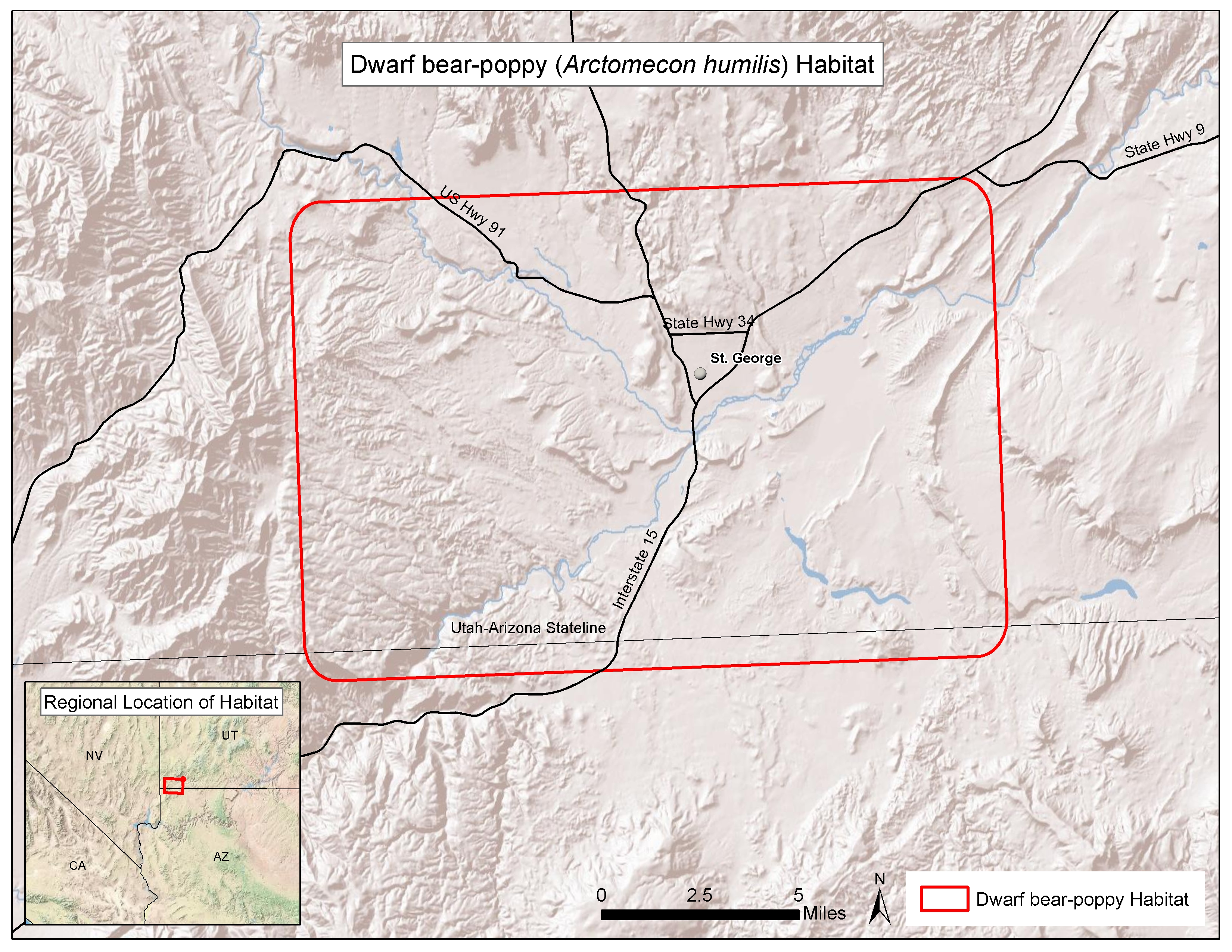