Did you have a flashback to science class when you saw Spike, the titan arum? I sure did. 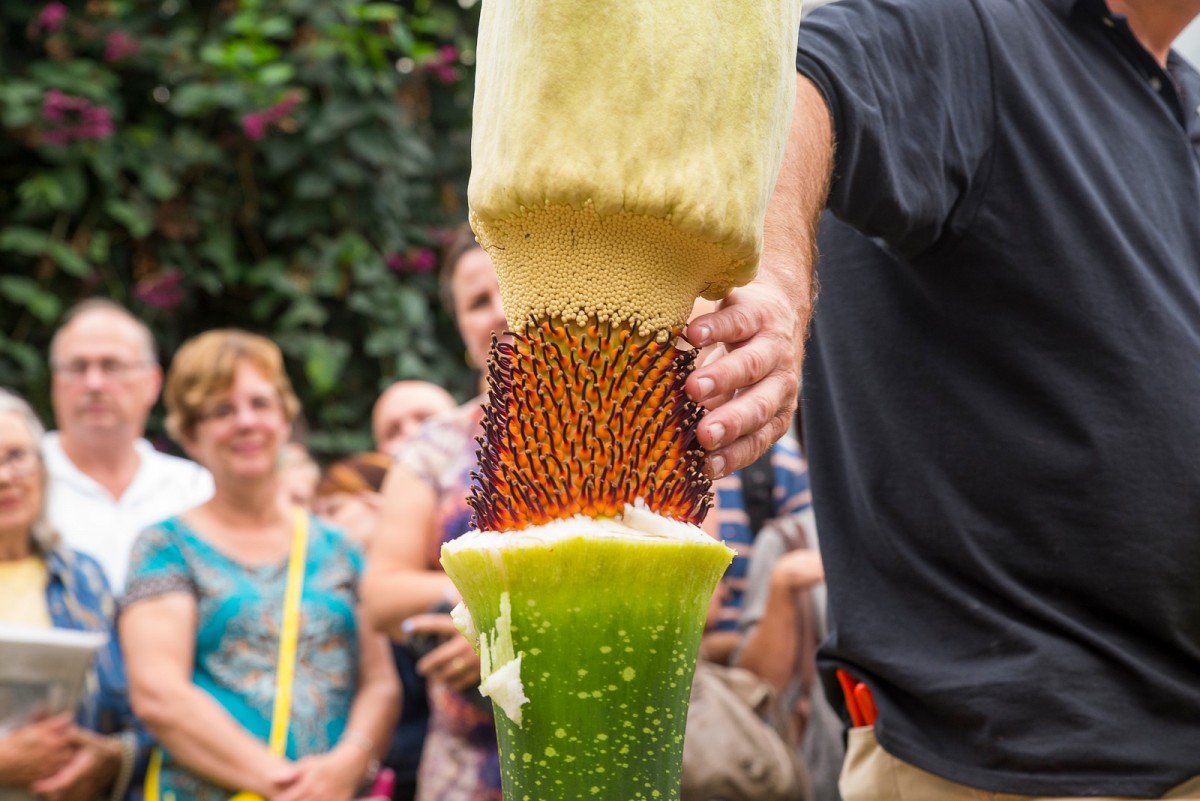 At my not-really-science-minded high school, botany (the study of plants) was taught as a subsection of biology (the study of all life) class. During the botany rotation, we learned a bit about plant names and plant parts, sprouted a few seeds, and dissected a plant. That was about it for my formal plant-science education. 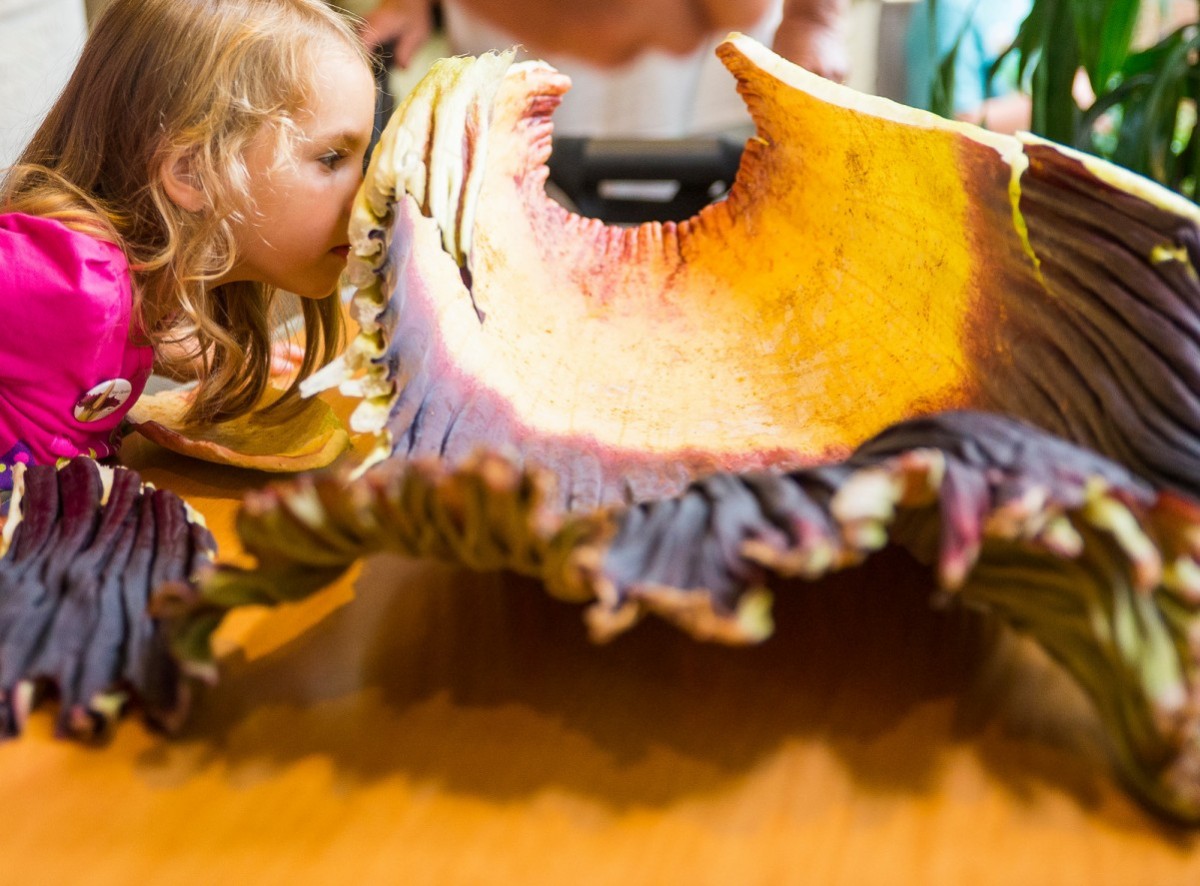 Hands-on plant science at the Garden: a young visitor gets a whiff of Spike’s removed spathe, looking for that telltale stench.

Flash forward a couple of decades and, despite now being an avid gardener, I found myself struggling to keep up with the scientists who were looking deep into Spike’s structures and processes. By the time Dr. Shannon Still and floriculturist Tim Pollak removed the spathe (the frilly bract that never opened) from Spike’s spadix (the flower tower that grew to 6 feet tall), I’d had to learn all about the titan arum’s morphology (see below) and crack open books and laptops to review the basics about male and female flowers.

And then they started talking pollen.

Flashback: What is pollen? 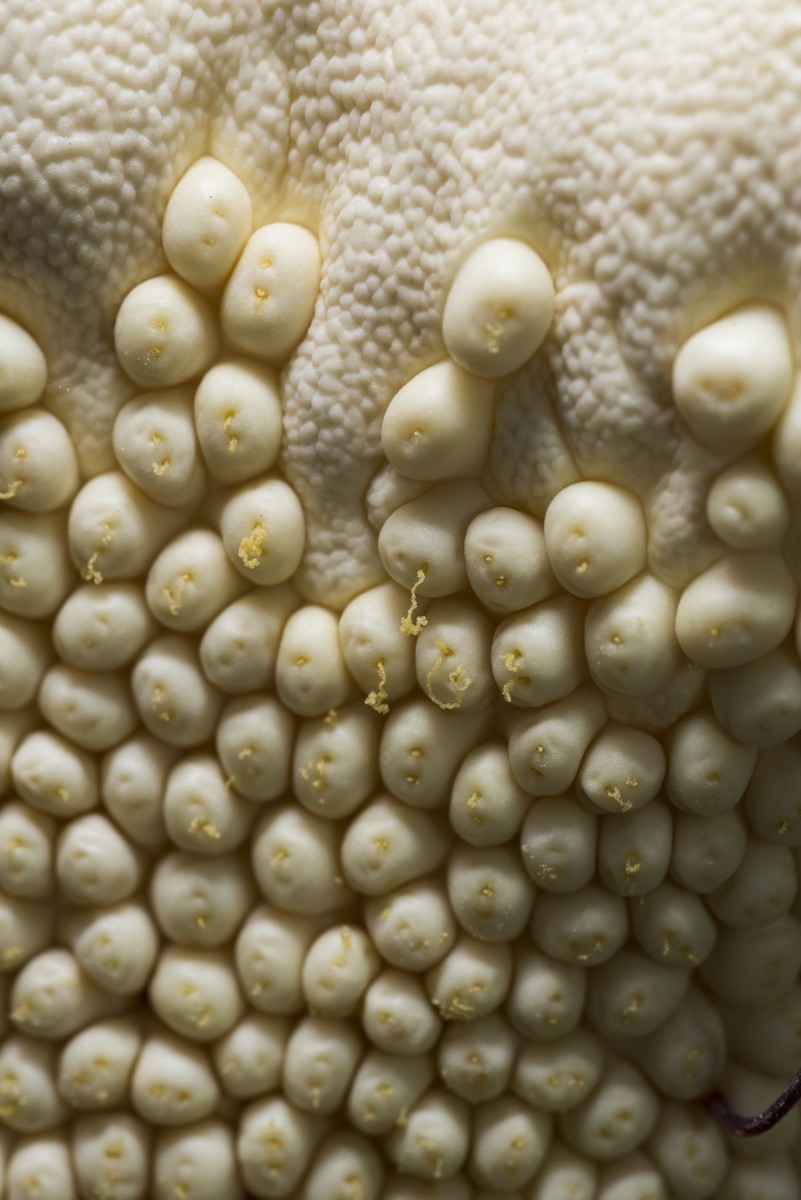 Tiny squiggles of pollen emerge from the male flowers about three days after Spike’s spathe was removed.

Think of a grain of pollen as a tiny packet of one plant’s genetic material that needs to meet up with another flower’s female genetic material. Technically, pollen is a haploid or gamete, the cell that carries the male half of the plant’s chromosomes.

The covering of a pollen grain is directly related to how the pollen travels to the next flower. That’s why wind-pollinated plants like sweet corn or oak trees have pollen as dry and fine as dust (indeed, the word “pollen” derives from the Latin for fine flour or dust). Orchids have developed waxy balls of pollen (pollinia) that stick to the heads and bodies of the many insects, hummingbirds, and mammals they use as pollinators. And, notoriously, the pollen of ragweed is a tiny spike—the better to hold on to moist spots like the inside of human nasal passages, where the grains never germinate, but cause all sorts of sneezing and snuffling.

Honeybee-pollinated plants (like many fruits, nuts, and vegetables) have evolved along with the bees themselves, offering up both nectar and pollen as food in exchange for the movement of pollen from plant to plant.

Flashback: Why are insects pollinators?

In a word, efficiency. Plants that rely on the wind are at the mercy of the wind: much of the pollen is wasted, as it never lands anywhere near a female flower’s stigma. Ditto for plants that rely on water. Insects are much more reliable, traveling directly from one flower to another, greatly increasing the chance of pollination. Bees are especially reliable, as they prefer to work an entire plant or crop of the same flower rather than skipping from one kind of flower to another. (That’s why attentive beekeepers can get a harvest of “pure” clover or linden blossom honey, rather than a wildflower mix.)

In nature, Spike’s pollinators are carrion beetles and dung flies—insects that would be attracted by the titan arum’s rotten smell and nighttime bloom.

Flashback: How does pollen work? 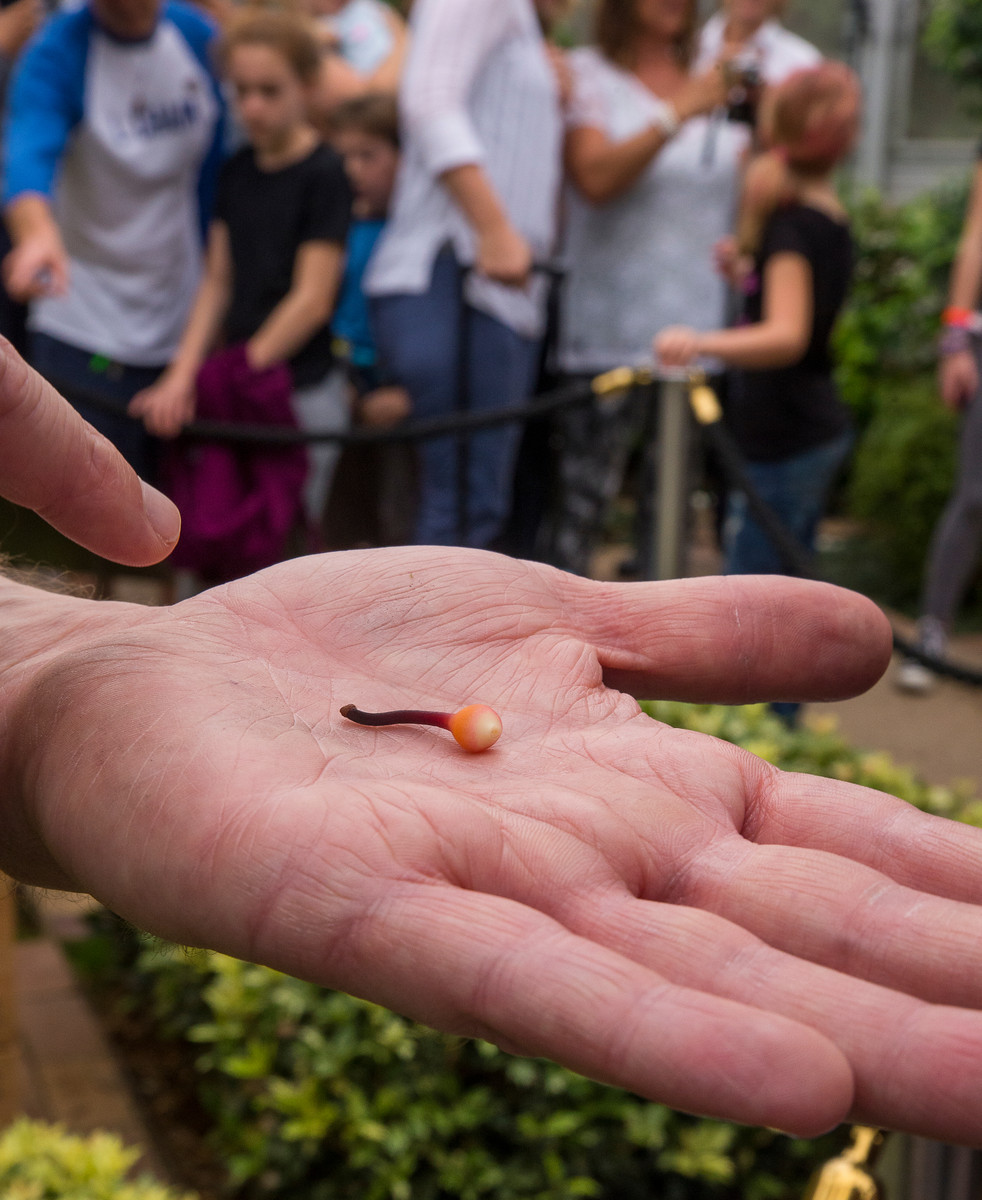 Dr. Shannon Still shows the crowd gathered around Spike one of the titan arum’s female flowers.

When a grain of pollen lands in the right place—the tip of the female flower’s reproductive structure, called the stigma—the pollen grain chemically tests the landing ground via proteins that signal genetic compatibility…or not. If deemed to be a good place to germinate, the pollen grain sends a rootlike sprout down into the style (the tube with the stigma on top), eventually reaching all the way down inside the ovary and ovule…where the male chromosomes and female chromosomes meet for fertilization and seed development.

Flash forward: What’s next for Spike?

Spike’s pollen never got the chance to hitch a ride on a carrion beetle’s back to the next titan arum in the rainforest. That’s why “Titan Tim” Pollak collected the pollen when it developed a couple of days after Spike’s operation.

Pollak says that they didn’t collect much of the bright yellow, talc-like powder—just a few test tubes’ worth (further proof that Spike ran out of energy). The pollen will be mixed with powdered milk—yes, powdered milk—in order to absorb moisture and separate the grains. Next, it will be frozen at minus 20 degrees Fahrenheit and stored in the freezer at the Garden’s seed bank. 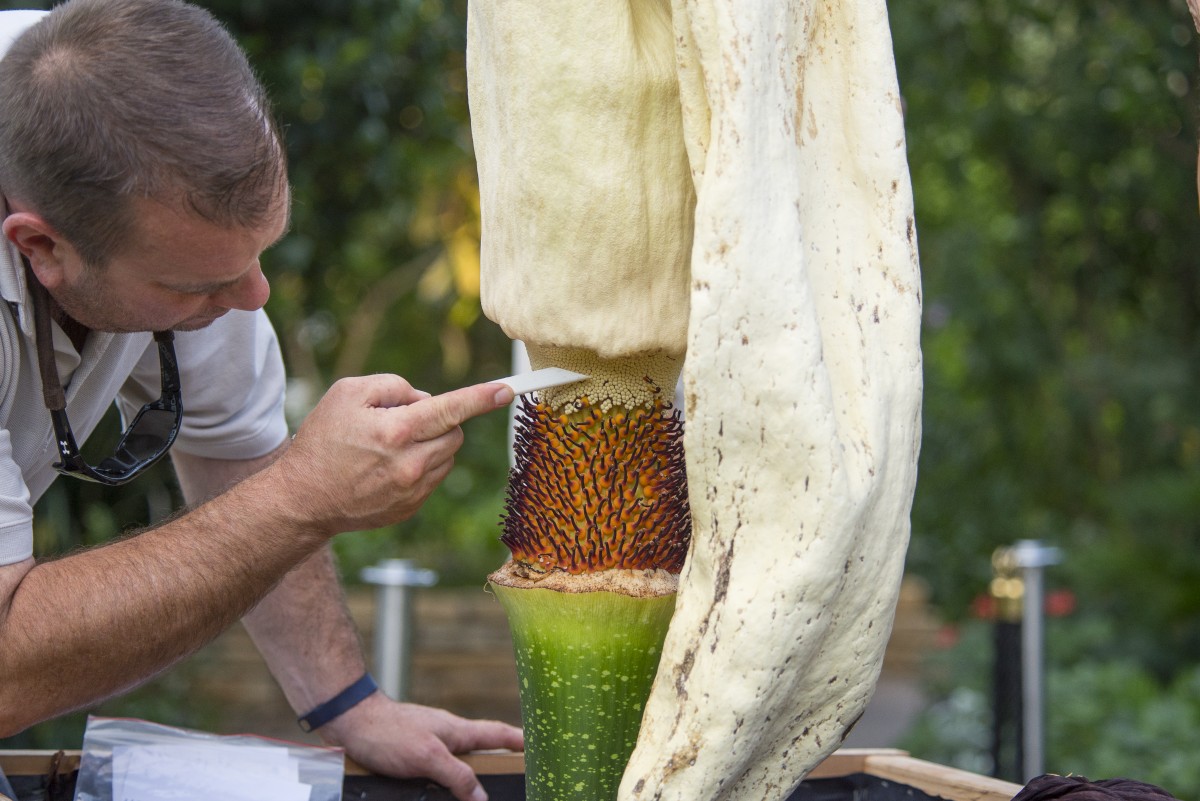 As the spadix collapses from age, horticulturist Tim Pollak harvests the pollen from Spike’s male flowers.

Spike’s pollen could then be shared with other botanical gardens or arboreta that would like to pollinate their blooming titan arums. The American Public Gardens Association has a listserve that shares notice of pollen needed or available; the Chicago Botanic Garden is a contributing member. By sharing Spike’s pollen, the hope is to increase diversity among the rare flowers blooming outside of Sumatra, the titan’s native habitat.

Pollen means that Spike lives on! Can’t wait for the next titan arum to bloom (we have seven more besides Spike in our production area)…and for the next plant flashback.

So you want to be a plant scientist? 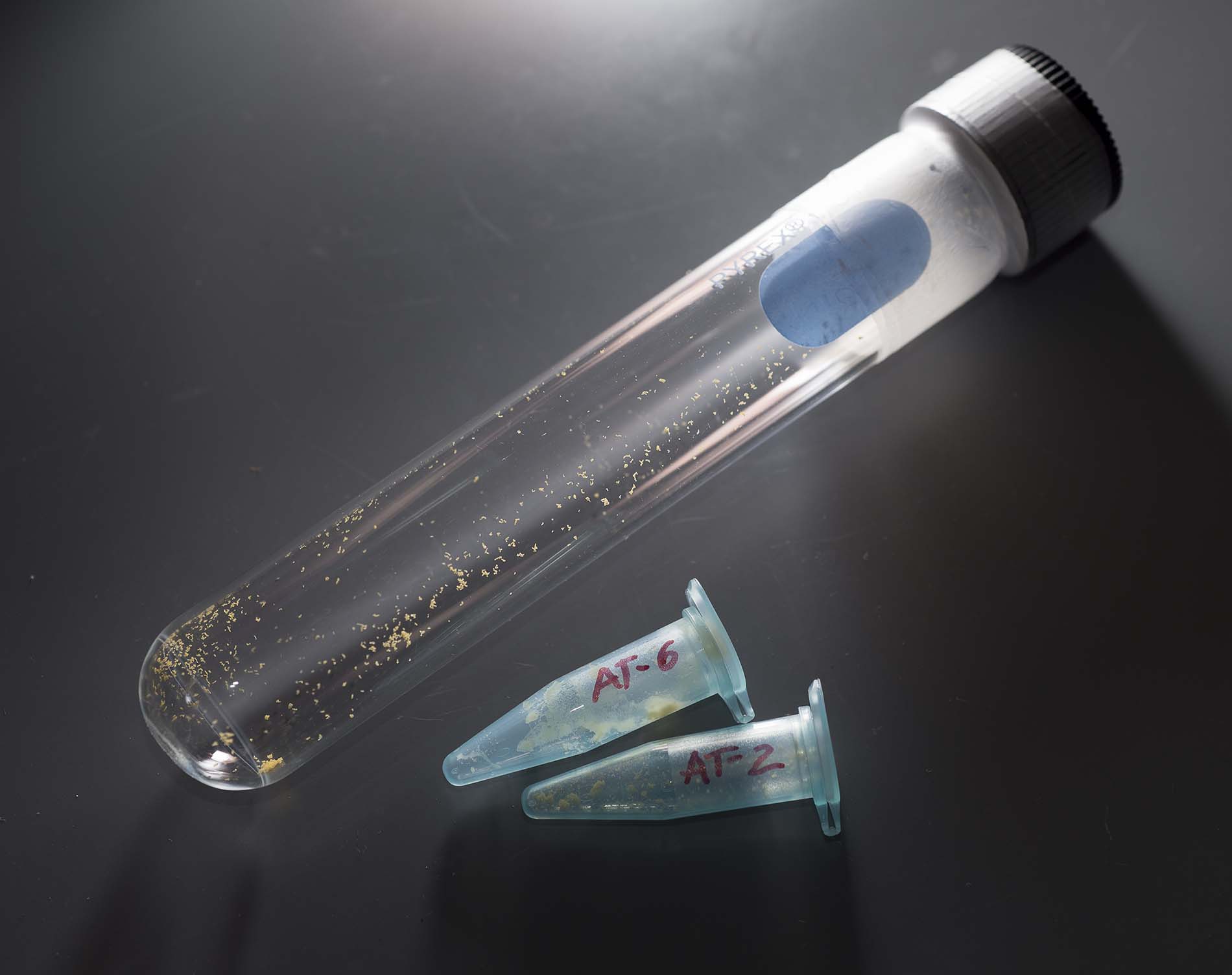 An Amorphophallus titanum pollen sample is ready to be stored for future pollination.

The science of botany runs deep; at our Daniel F. and Ada L. Rice Plant Conservation Science Center, you can see scientists in many of the fields below in action. Got a STEM-minded kid? Perhaps he or she would like to study this list, which was compiled by Boyce Tankersley, director of living plant documentation, in response to the question, “What is the study of flowers called?”