Traveling Down the Glacier

There’s more to the North Branch Trail addition than meets the eye.

It’s a great story to tell the kids or to share with a biking buddy as you try out the North Branch Trail addition.

On the surface (literally), it’s a lovely bike/pedestrian trail that slopes down from Green Bay Road, skirting the north edge of Turnbull Woods and linking up to the outer road of the Chicago Botanic Garden. But dig a little deeper (literally and figuratively), and you’ll find the reason for that slope: the “hill” is actually the remnants of a glacier. Its proper name is the Highland Park Moraine. It’s one of a series of five, collectively called the Lake Border Moraine System, found on the inland border of Lake Michigan.

Flashback to geology class: a moraine is a giant accumulation—a ridge—of clay/sand/gravel pushed forward by the leading edge of a glacier, then left behind as it shifts its motion and melts/recedes. Moraines vary in sizes and heights.

Glacial ice that once covered northern Illinois began to recede about 14,000 years ago, leaving the five moraines, like scallops in the landscape, with the oldest to the west, the youngest to the east.

Oldest and furthest west is the Park Ridge Moraine; to the east of it is the Deerfield Moraine. The lowland between them is the West Fork of the North Branch Chicago River. Third is the Blodgett Moraine; its creation dates back to 13,000-plus years ago. The valley between it and the Deerfield Moraine is the Middle Fork of the North Branch Chicago River. (The West Fork, Middle Fork, and Skokie Rivers come together to form the North Branch Chicago River.) Next comes the Highland Park Moraine, formed about 13,000 years ago; Green Bay Road was built along its crest. The Chicago Botanic Garden lies in the Skokie River Valley between the Highland Park and the Blodgett Moraines. Finally, a bit north and east lies the Zion City Moraine, the youngest of the five.

Most people are familiar with the Continental Divide near the middle of the country; a secondary divide travels along our edge of Lake Michigan. 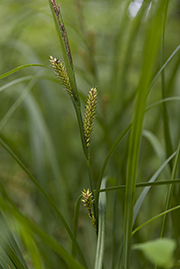 Planning for the bike/pedestrian path included much deliberation about the plants that were already growing at the site.

As construction neared, Garden ecologist Jim Steffen reached out to the Glencoe Friends of the Greenbay Trail (GFGT) and Betsy Leibson, who heads up the all-volunteer group, which is dedicated to restoring the sections of the Green Bay Trail bike path that run through their town (and ours).

Steffen offered to donate hundreds of sedges (Carex pensylvanica and Carex hirtifolia) that were in the path of construction—and then helped Leibson and volunteers dig them up for transplanting along their trail. The sedges are reportedly thriving. GFGT showed their appreciation in such an appropriate way. 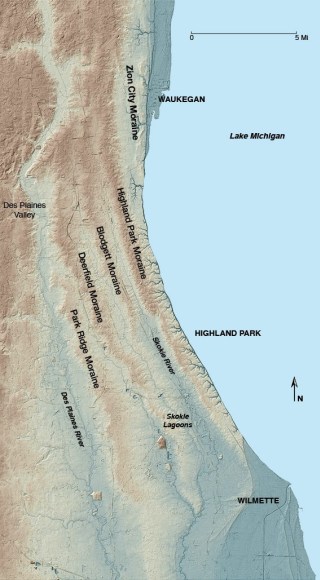 A helpful map for visualizing the ups and downs of the moraines and the valleys in between. Source: Luman, Donald E., LiDAR Surface Topography of Lake County, Illinois. ©2013 University of Illinois Board of Trustees. All rights reserved. LiDAR map courtesy of the Illinois State Geological Survey.