Even in the darkest days of winter, dwarf conifers hold fast to colors including blues and silvers and to thick, fragrant branches. On a gentle slope, tucked among boulders and nestled into the corners and cutaways of sandstone steps, the Dwarf Conifer Garden features mostly evergreens. This four-season garden includes trees that are fragrant year-round, as well as conifers with eye-catching shapes (the globe-shaped center of Little Gem arborvitae, for example) and textures (such as the weeping branches on Miss Grace dawn redwood).

The Dwarf Conifer Garden features trees that are smaller and slower growing than other conifers. Conifers are plants that bear cones. Mostly native to the earth’s northern hemisphere, conifers have thin needle-like or scale-like leaves that help reduce moisture loss and allow snow to be shed easily. Climb to the top of the steps to see the smallest dwarf conifers, along with a hilltop view of the Elizabeth Hubert Malott Japanese Garden and the Great Basin.

The renovation of the Dwarf Conifer Garden was made possible by a generous gift from Georgiana Taylor, with support from the Woman’s Board of the Chicago Horticultural Society. 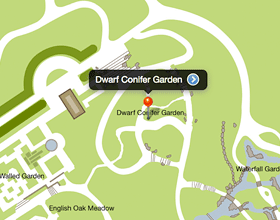