Several decades ago, an osprey would be a rare—if not impossible—sight in Cook County in the summer. But now, thanks to the ban on certain pesticides (including DDT), and the creation of osprey nesting platforms, the fish-eating bird is breeding again in local forest preserves.

The osprey looks somewhat like an adult bald eagle, but doesn’t have the eagle’s full white head or tail. Instead, it has a broad brown band through the eye, a brown back, and white belly. An osprey flies with a crook in its wings. Immature bald eagles, with their mottled black and white plumage, can easily be mistaken for ospreys. In summer, visitors can watch an osprey (Pandion haliaetus)—with its 6-foot wingspan—soar above a lake, then plunge in to snatch a meal with its talons to bring to its young.

Once endangered in Illinois, the osprey disappeared as a breeding bird from Illinois about 60 years ago. Scientists think, as with the bald eagle, that when the osprey ingested certain pesticides, the chemicals caused its eggs to thin and crumble during brooding. After DDT was banned, state biologists hoped the osprey would return to breed in Illinois. But the bird needed some help, including cleaning up local waterways and providing nesting areas.

In the 1990s, Cook County Forest Preserves officials, following the lead of biologists in other states, began erecting osprey nesting platforms—40-inch-wide platforms atop 50-foot-tall posts—in the preserves, hoping the ospreys would use them to nest.

It worked. The tall structures gave the ospreys a 360-degree view of their surroundings, something scientists say the birds need when choosing a nesting spot. Today, at least a dozen osprey pairs breed in Cook County, with several more in other nearby counties.

This year, the Chicago Botanic Garden installed an osprey nesting platform, and is waiting to see if a pair will find it to their liking.

According to officials of the Cook County Forest Preserves, 12 osprey pairs bred on man-made platforms in the county in 2014, including at Long John Slough at the Little Red Schoolhouse in Willow Springs. A pair of osprey tending to their nest atop a platform was photographed at Saganashkee Slough in the Palos Preserves this year by Wes Serafin, a long-time proponent of helping ospreys return as a breeding species to Cook County. 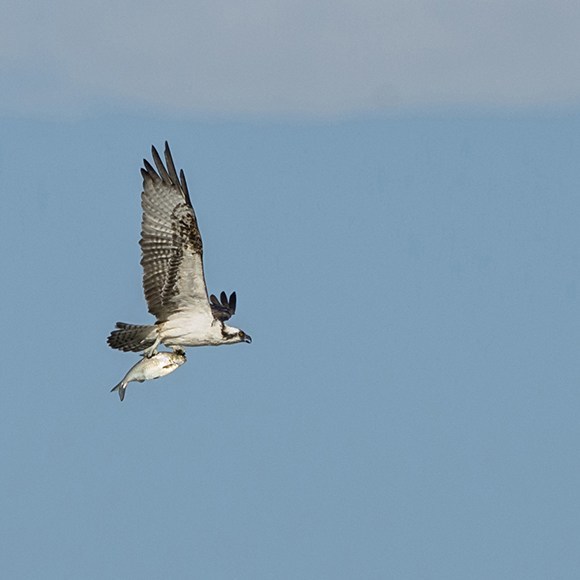 The ospreys return in April, often to the same platform they used the previous year. They build a nest of sticks atop the platform, adding new ones each year. The female lays three to four eggs, which hatch in about 38 days. While she broods, the male fiercely defends their territory and brings food to his mate. The young remain in the nest for about two months, begging constantly for food. Then they take their first flights off the platform.

Watching an osprey grab a meal can be fascinating. The bird appears as if it is going to plunge head-first into the water, but then it straightens its head and grasps the fish with its talons. Two forward-facing and two backward-facing toes have sharp spines that enable the bird to clutch the fish. Occasionally an osprey will grab a fish too heavy for it to carry, in which case the osprey might drop it, and try for another meal.

The osprey that nest in northern Illinois in summer spend winters in Florida, Mexico, and South America.

The Illinois Department of Natural Resources is now in the fourth year of their program designed to bring more osprey to the state to increase the number of breeding pairs. 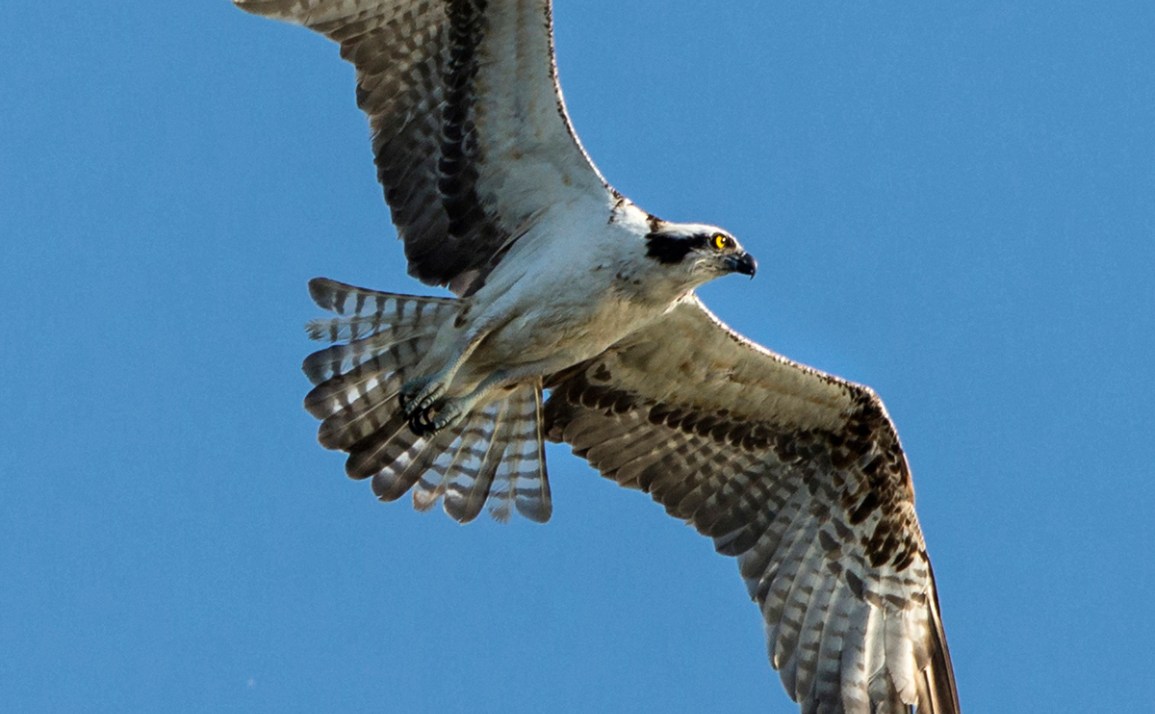