Of Assassin Bugs and Damselflies in the Summer Garden

If you happened to walk around the Heritage Garden in late June, the unusual blue color of the Moroccan mountain eryngo (pronounced eh-RING-go), Eryngium variifolium, probably caught your eye, and its peculiar perfume tickled your nose. It was also swarming with flying insects.

The odor was not lovely and sweet. I would describe it as similar to musty, molding fruit—not unpleasant, but certainly not a fragrance you would wear. It only lasted a few days, during which time it hosted an amazing number and variety of insects. I attempted to photograph and identify as many of them as I could. This was a lot harder than I expected, because the insects were in constant motion and most of them were small. I didn't always capture the key features needed to identify them at the species level. In spite of this, you'll see that that the variety was astounding. Let me introduce you to what I found at the Chicago Botanic Garden recently. 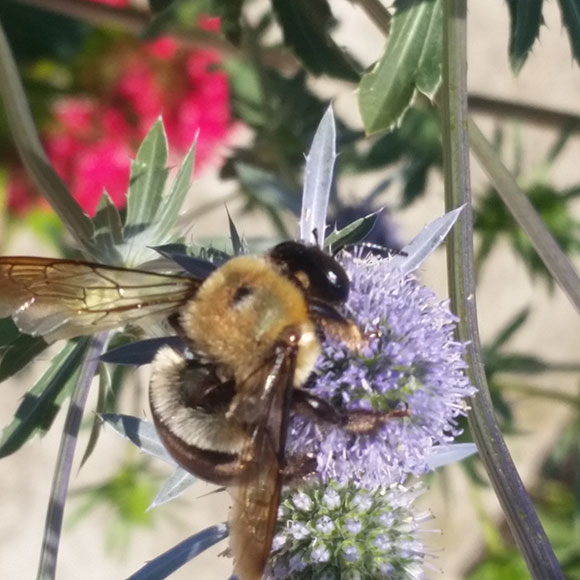 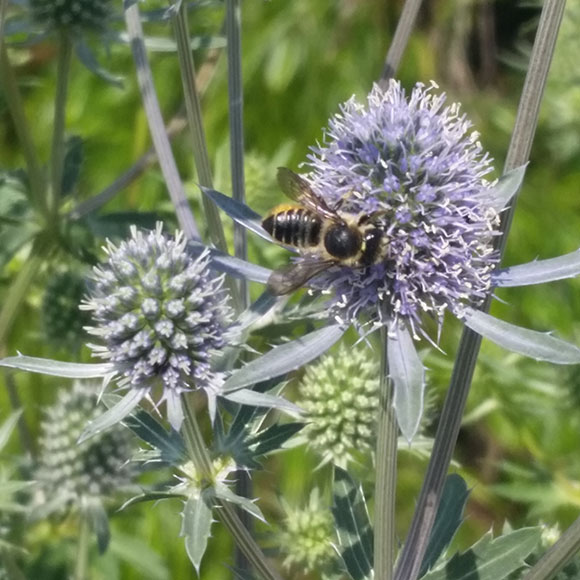 Mason bees are in the Megachile family. The are also known as leaf-cutter bees. 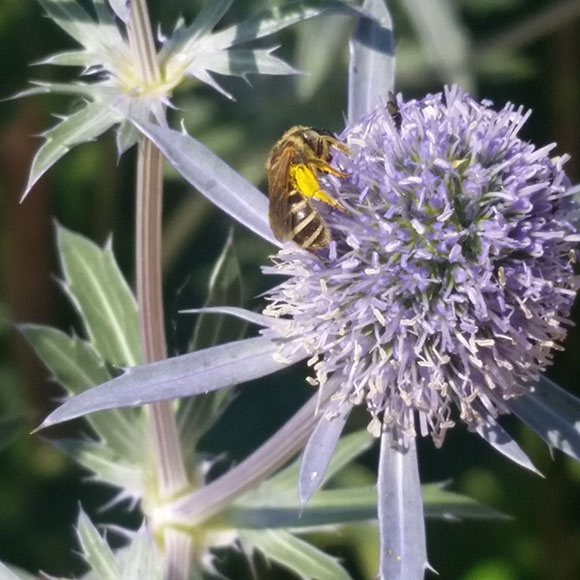 This mason bee has filled the "pollen baskets" on its hind legs with pollen from the eryngo, and they are now swollen and bright yellow. Pollen is also sticking to the hairs on its thorax and underside. It is a good pollinator!

Carpenter bees and Mason bees are native to our region. Honeybees are not native to the United States. I saw honeybees in the Heritage Garden, but they were not interested in this flower. Honeybees tend to go for sweeter-smelling flowers. 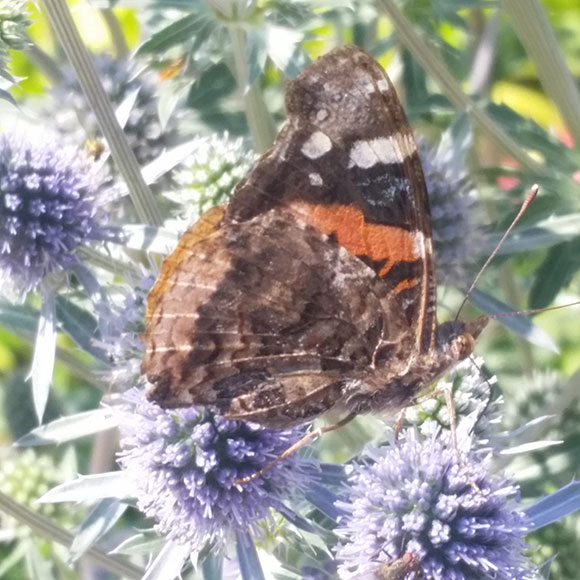 The red admiral, with its characteristic red stripe across the middle of the upper wings, is common in our area. 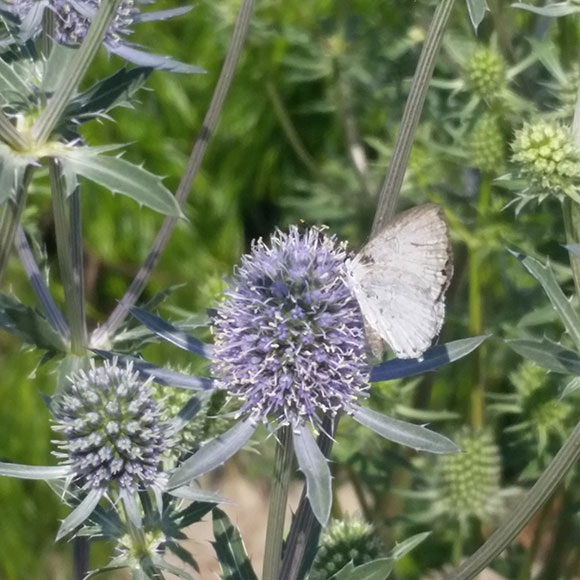 This tiny gray-blue butterfly is an azure. Some azures are the same blue color as the eryngo flower.

A monarch butterfly also flew overhead while I was taking pictures, but it didn't stop by. Again, the scent of this flower isn't attractive to all pollinators.

The squash vine borer larva can be a nuisance in a vegetable garden, but it is a beautiful and beneficial pollinator as an adult moth. Sometimes we have to resist the urge to judge our fellow creature as being good or bad. 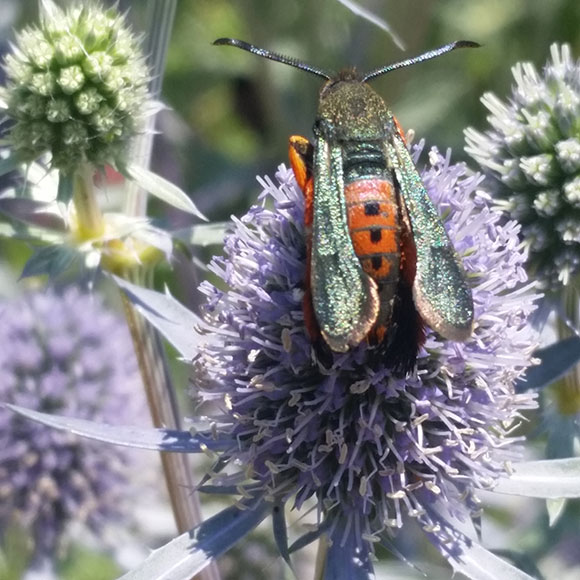 The squash vine borer was the flashiest visitor I saw on the flowers.

When we think of flies, we tend to think of those annoying houseflies or other pests, but there are other kinds of flies. The Syrphidae family, also known as hoverflies or flower flies, feed on pollen and therefore serve as important pollinators for many plants. I found three species of syrphid flies on the eryngo. 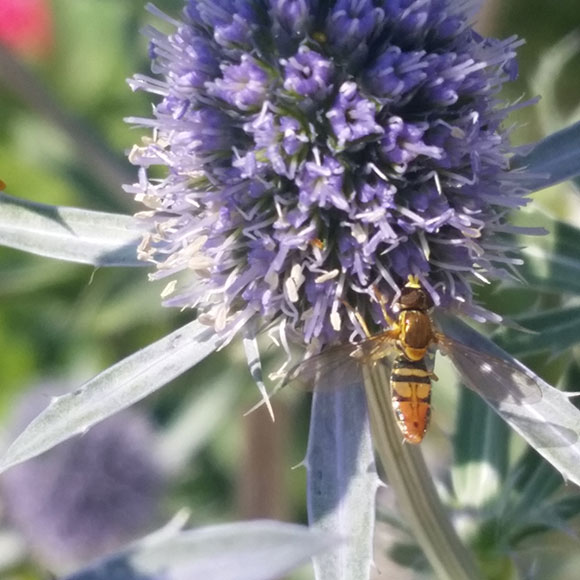 Flower flies resemble bees because of their yellow and black striped pattern, but this little insect bears the large eyes and short antennae that are characteristics of a fly. 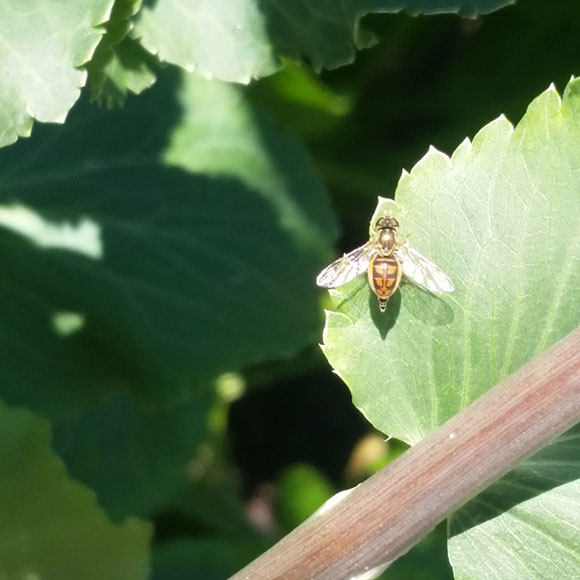 This syrphid is very small, only about a a quarter of an inch long. It looks a lot like the first, but it had a rounder abdomen. The pointed end is an ovipositor, so after inspection, I believe this is the female and the other may be male, so I counted them together.

7. Another kind of syrphid fly 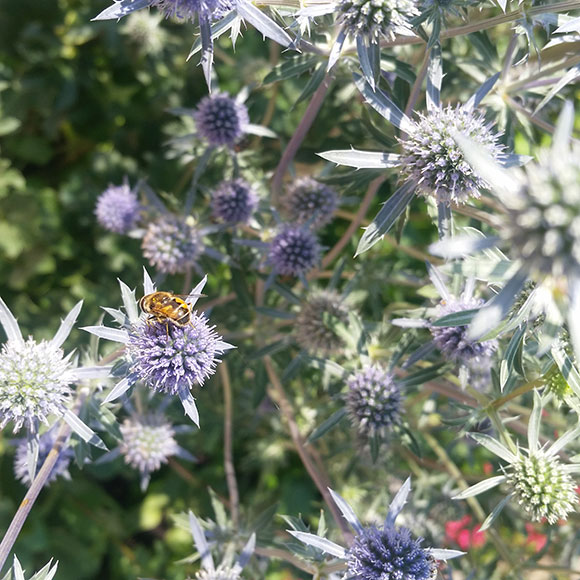 This syrphid fly is a little bigger and fuzzier than the previous one. It could easily be mistaken for a bee. 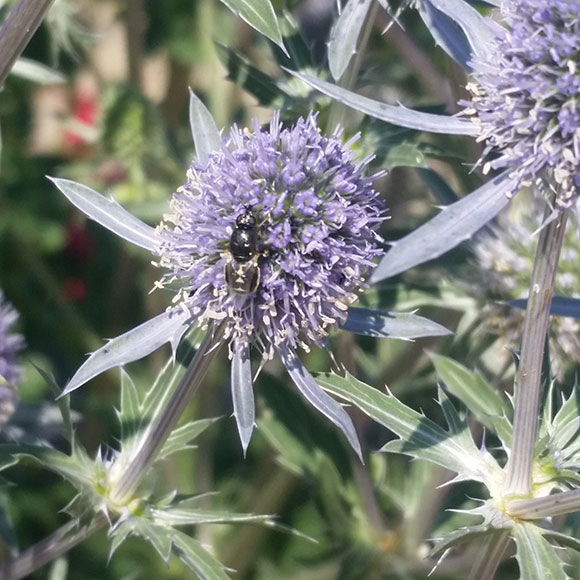 I was having a difficult time getting good picture of some of these small insects, and as a result, I didn't get enough details to identify this half-inch-long fly with white triangles on the back of its abdomen.

Houseflies fall into the family of flies known scientifically as Calliphoridae, also called the blowfly family, and they were also represented on our eryngo plant. 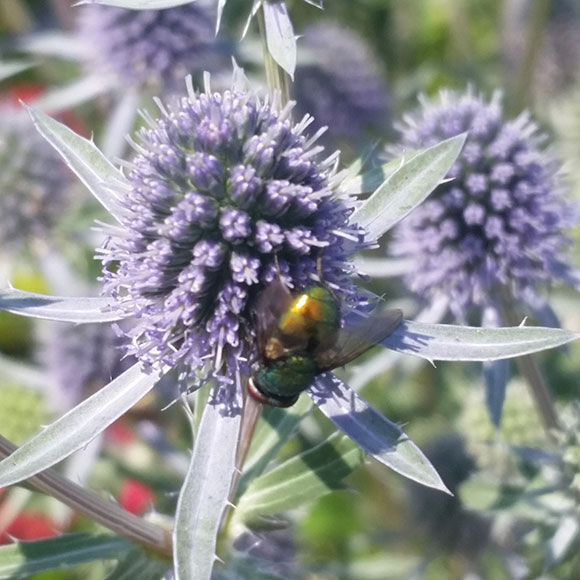 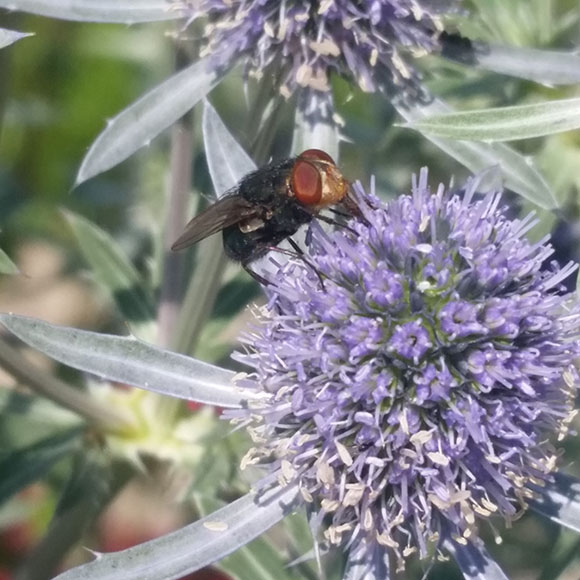 The same green bottle fly can bee seen with its proboscis sipping nectar from the flower in this image. 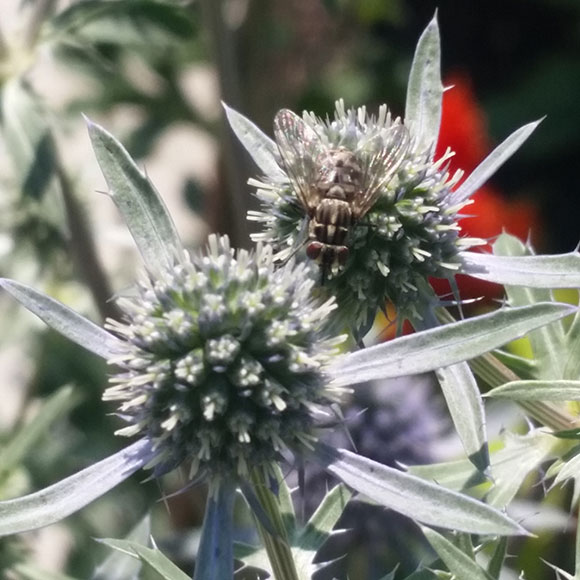 This is the only image I got of another blowfly species, a cluster fly (genus Pollenia).

Tiger flies prey on carpenter bees, which were feeding on the eryngo flowers, so seeing this predator around the eryngo makes sense. 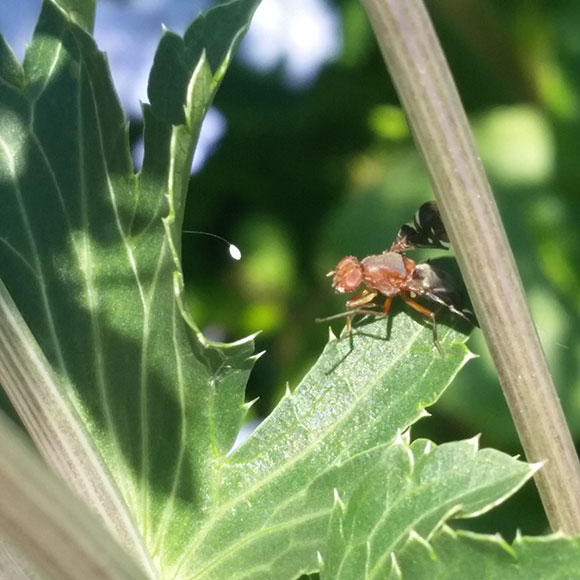 I could not get a good picture of this one, because it was hiding in the shadows under the flowers. The wing pattern suggests some kind of tiger fly. Its secretive behavior is also a clue to its identity.

The wasps I observed were far too busy collecting nectar and pollen to notice me. I had no concerns about being stung. 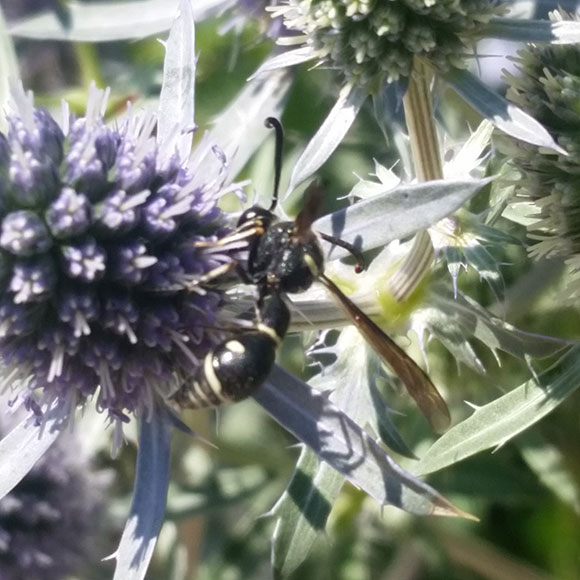 Vespid wasps are a large family of wasps that include paper wasps—those insects that make the big paper nests. These insects live in colonies and they do sting when they feel threatened.

I watched a few ants appear very determined as they walked up the stems of the eryngo, dipped their heads into the flower centers, and went back down the stem as swiftly as they arrived. 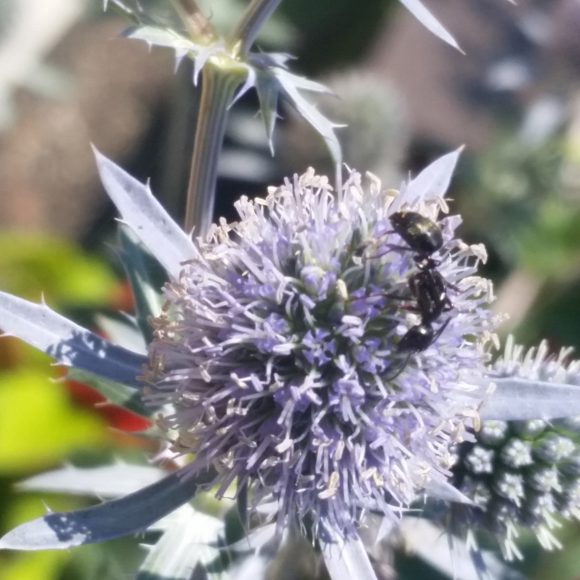 The ants must have a colony living in the ground under the Eryngo.

Where there are a lot of flying insects, there are going to be some predators. There were damselflies hovering over the blossoms, feeding on the flies, not the flower. 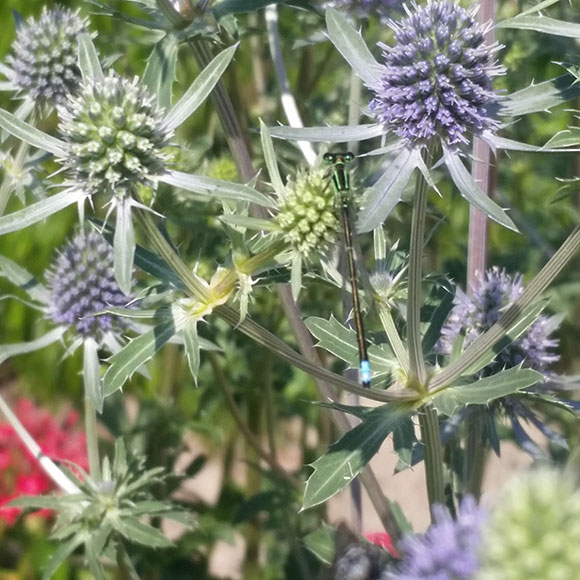 Damselflies are difficult to identify without getting a really good closeup of their abdomens and markings—and my picture wasn't good enough. I believe this is some kind of spreadwing.

Assassin bugs fall into the category of insects known as "true bugs." I saw few assassin bugs lurking around the eryngo flowers. 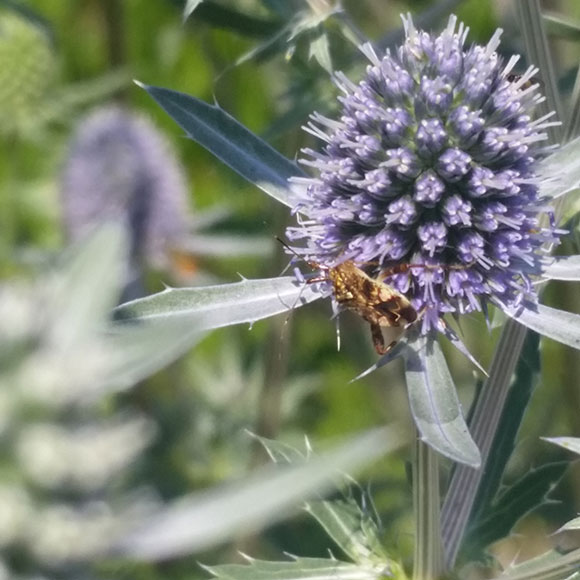 Assassin bugs and their kin have piercing mouth parts that penetrate their prey and suck the juices out. This guy wasn't there to feed on nectar or pollen.

Like the damselfly and assassin bug, this spider is hanging out somewhere under the flowers to prey on the flies, bees, and other insects that happen into its web. 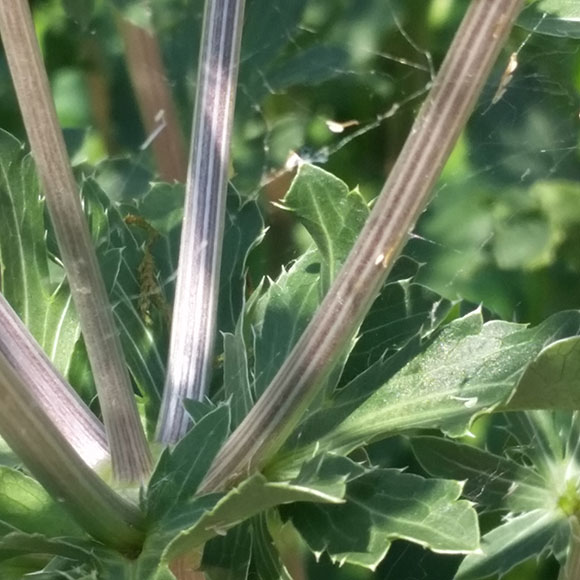 Spiders tend to set their traps and hide. I never saw the spider that made this tangle-web but I suspect it was well fed.

In total, I found two kinds of bees, two butterflies, one moth, six flies, one wasp, one ant, one damselfly, one assassin bug, and one spider—sixteen different bugs on this one bright, smelly plant!

The take-away from my experience is that scent is a really successful strategy for attracting pollinators. Like the titan arum, the Moroccan mountain eryngo produced a super potent blast of odor for a brief period time and then moved on to the next phase in its life cycle, which suggests that it requires a lot of a plant's energy reserves, and may not be sustainable for a long time. This strategy works well as long as the timing of the bloom coincides with the pollinators' need to feed and ability to get to the flowers.

I find this phenomenon fascinating. If you share my passion for plants and their relationships with insects, check out Budburst at budburst.org and find out how you can help scientists who need your observations to contribute data to their research.