The Love Lives of Orchids

Valentine’s Day has special meaning for us at the Chicago Botanic Garden. With that in mind, we’ve gathered a few stories about how orchids will do just about anything to attract a pollinator…along with a few soundtrack suggestions. 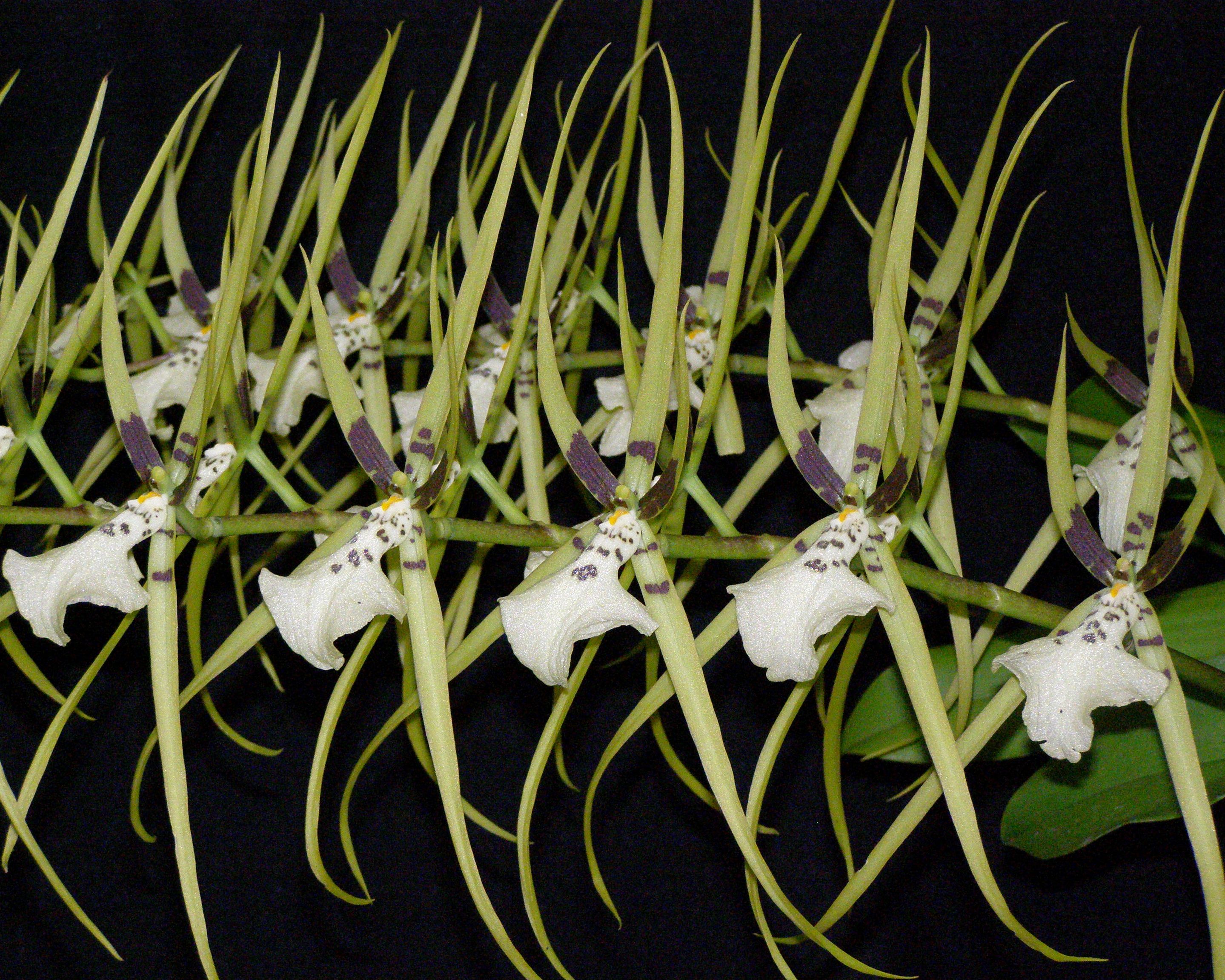 Granted, a little makeup can work wonders on date night. But the spider orchid, Brassia, takes things even further in order to attract an insect: it makes itself up to look like a pollinator’s favorite food.

The orchid’s flower has developed the color and shape of a large tropical spider. But it’s not trying to attract the spider—no, that would be too obvious. Rather, scientists think that the orchid attracts a wasp that hunts the spider as potential food for its own larvae. Thus the wasp is fooled into landing on the flower—and picking up its pollen—while hunting. So cheeky!

I’ve Just Seen a Face
Falling, yes I am falling, and she keeps calling me back again. 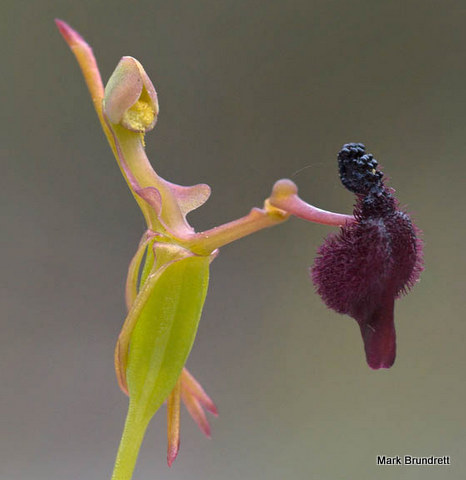 A hammer orchid (Drakaea glyptodon) awaits its next suitor. Photo by Mark Brundrett.

When the hammer orchid (Drakaea species) set its sights on the Thynnid wasp as a pollinator, it didn’t mess around: it developed a flower that looked like a lady wasp and a scent like the female pheromone used to attract a male.

In nature, the lady wasp climbs to the top of a plant and awaits a male—who recognizes the pheromone, flies over, plucks her off the plant, and mates. The hammer orchid’s flower mimics the look of the waiting female, but when the male flies up and lands, his weight throws him into the back part of the flower that carries the pollen—with the force of a hammer strike. He realizes he can’t carry her off, and heads off for another orchid, where the next hammer throw deposits the pollen he’s already carrying. 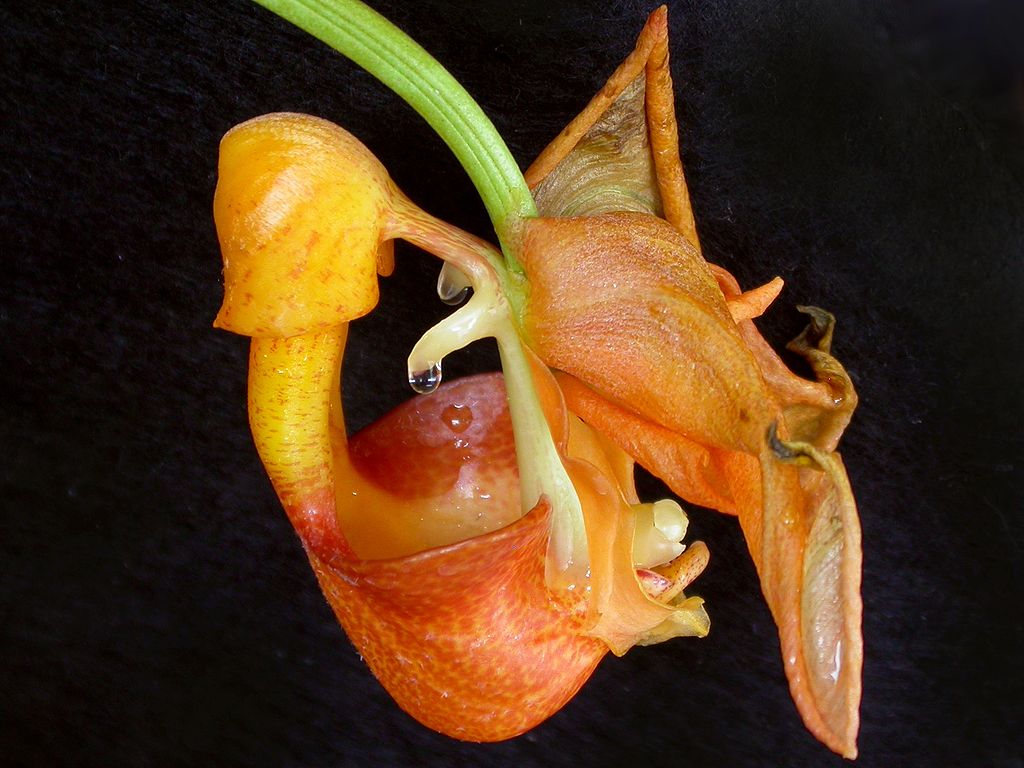 The right perfume can change a man. The bucket orchid, Coryanthes speciosa, has singled out the male euglossine bee for a pollinator. The flower produces a highly scented perfume that attracts swarms of male bees—which know that it’s a female’s favorite and rub it all over themselves. But step carefully, gentlemen: it’s a slippery slope into the flower’s bucket, where you’ll have to swim to the exit—picking up the flower’s pollen on your way out. On the plus side: you’ll smell great to that female bee when you finally find her!

(Check out more on orchids fooling mating bees with this famous video: https://www.youtube.com/watch?v=-h8I3cqpgnA.)

I’m Happy Just to Dance with You
Before this dance is through I think I’ll love you too. I’m so happy when you dance with me. 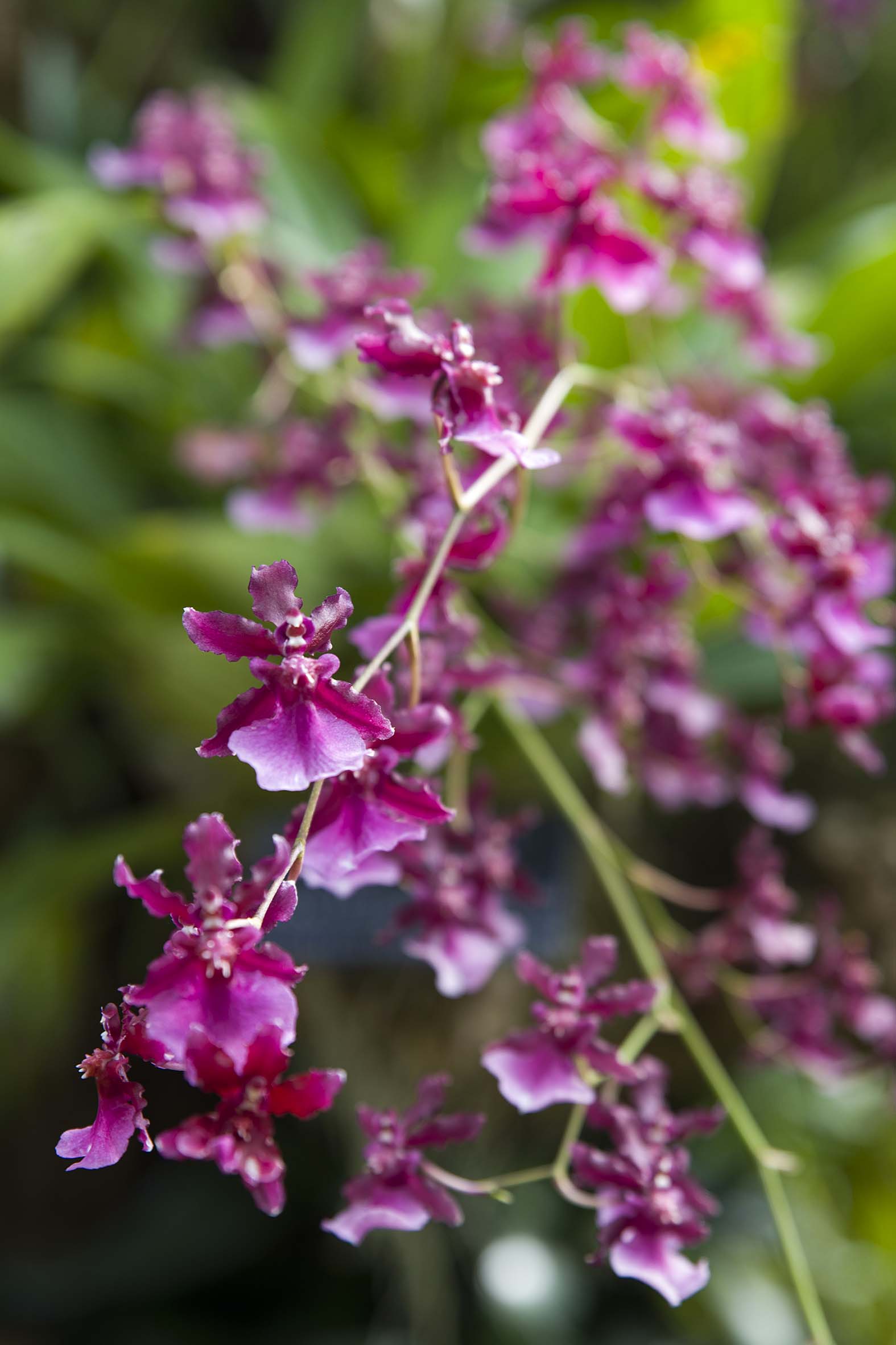 The most fashion-conscious orchids (Oncidium) are called “Dancing Ladies,” because of their wonderfully ruffly petals that look like the spread skirts of dancers. The most prominent petal on the orchid’s flower—called a lip, or labellum—can be ruffled, spotted, hairy, pouched, or fringed. All are features meant to attract a pollinator into using it for a miniature landing platform (the lip is much sturdier than this bloom’s delicate design lets on), drawing it in close to the center column that holds pollen.

Oncidium Sharry Baby ‘Sweet Fragrance’ is the supermodel of dancing ladies—and did we mention that it just happens to smell like chocolate? Most fragrant in the late afternoon to early evening, this is truly an orchid that knows the way to a woman’s heart.

Bonus Track! Mr. Moonlight
And the night you don’t come my way, Oh I pray and pray more each day, ’cause we love you, Mr. Moonlight.

Angraecum sesquipedale ‘Flambouyant’ x var. bosseri ‘Lisa’—pollinated by the light of the moon.

With thanks and apologies to the Beatles.