The Local Disappearance of Garlic Mustard

When it comes to controlling invasive plants, a little faith can’t hurt. This is particularly true for garlic mustard (Alliaria petiolata).

We have been struggling to get this highly invasive biennial plant under control at the Chicago Botanic Garden for more than 20 years. When I first began working on restoration of our 100-acre Mary Mix McDonald Woods, it took weeks of hand-pulling with many volunteers each spring to clear just 10 or 11 acres. After years of not letting the garlic mustard set seed in the McDonald Woods, a few years ago we finally began to see a light at the end of the tunnel (though we’d still end up with mountains of pulled garlic mustard each year). Thanks to the tremendous help of Garden volunteers, garlic mustard growth in the Woods has finally been curtailed, and each year we are now able to remove all flowering garlic mustard in the Woods’ entire 100 acres. 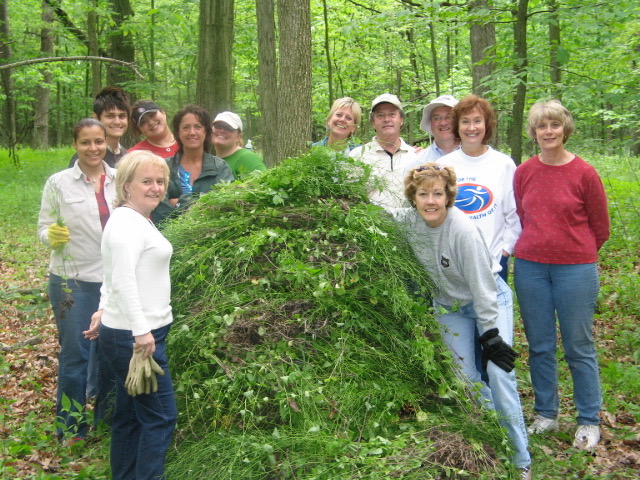 Over nearly two decades, Garden volunteers have played a critical role in helping remove garlic mustard from the McDonald Woods.

When we began the ecological restoration project in the Barbara Brown Nature Reserve (located at the south end of the Garden near Dundee Road), the area was highly degraded and choked with buckthorn shrubs (Rhamnus cathartica). After the buckthorn was removed, the following spring was a nightmare in terms of garlic mustard. Acres upon acres of garlic mustard monoculture required removing several dump truck loads just to begin making a dent in the population. 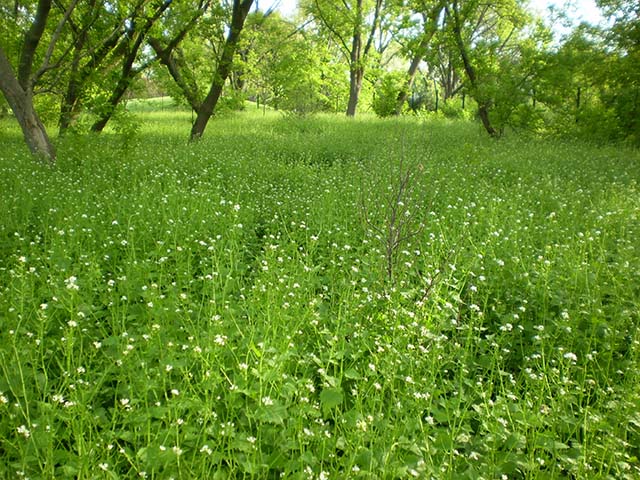 Garlic mustard became so dense in the Brown Nature Reserve that we were reluctant to pull it, since the resulting soil disturbance would greatly enhance sprouting of the soil’s dormant garlic mustard seeds. Fortunately, one of the Garden’s creative mechanics devised a basket system on a handheld scythe. This ingenious tool allows us to harvest the plant tops by cutting and collecting the unripe seedpods—but unlike hand-pulling, using this tool completely eliminates soil disturbance.

Although the Reserve covers only six acres, in the first few years we were not able to remove all the garlic mustard plants before they began to drop their seed. This led to several more years of hand-harvesting to get the population more under control. By spring 2017, and we only found about 75 flowering plants to remove. What was once viewed as an impossible goal to achieve (i.e., near-total elimination of flowering garlic mustard from the reserve) has actually happened! Too good to be true, perhaps? 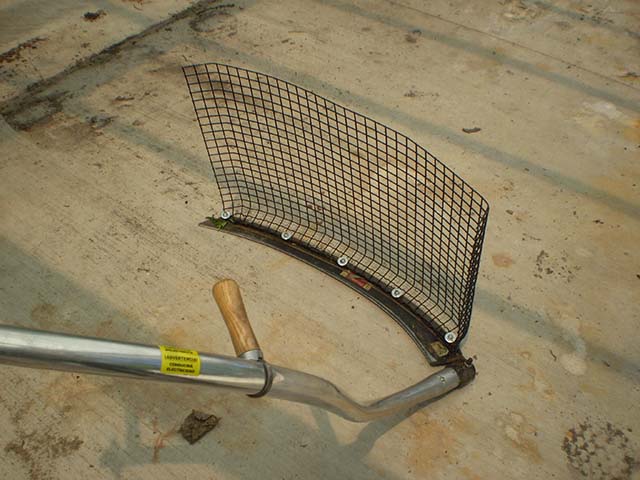 This ingenious device fabricated by one of the Garden’s maintenance mechanics allows us to capture the garlic mustard’s unripe seedheads cut by the scythe’s sharp blade (the curved metal piece along the bottom).

There have been recent field observations circulating in the Chicago region regarding a possible disease that apparently is having a significant negative effect on garlic mustard (see woodsandprairie.blogspot.com).

Observers have reported an almost complete absence of garlic mustard in areas that are undergoing habitat restoration—and this absence has even been observed in areas where no invasive species management has been done. Further, some restoration workers have reported garlic mustard with very “weird” rhizomes that have many small plants emerging along them. This is not at all a normal growth form for garlic mustard. The speculation is that a virus or some other pathogen is deforming and/or killing the plants. This potential pathogen might explain why we observed such an incredible decline of garlic mustard at the Barbara Brown Nature Reserve.

Wouldn’t it be great if nature offers a way to rid our region of an invasive plant that has been plaguing our natural areas for so long? Stay tuned! 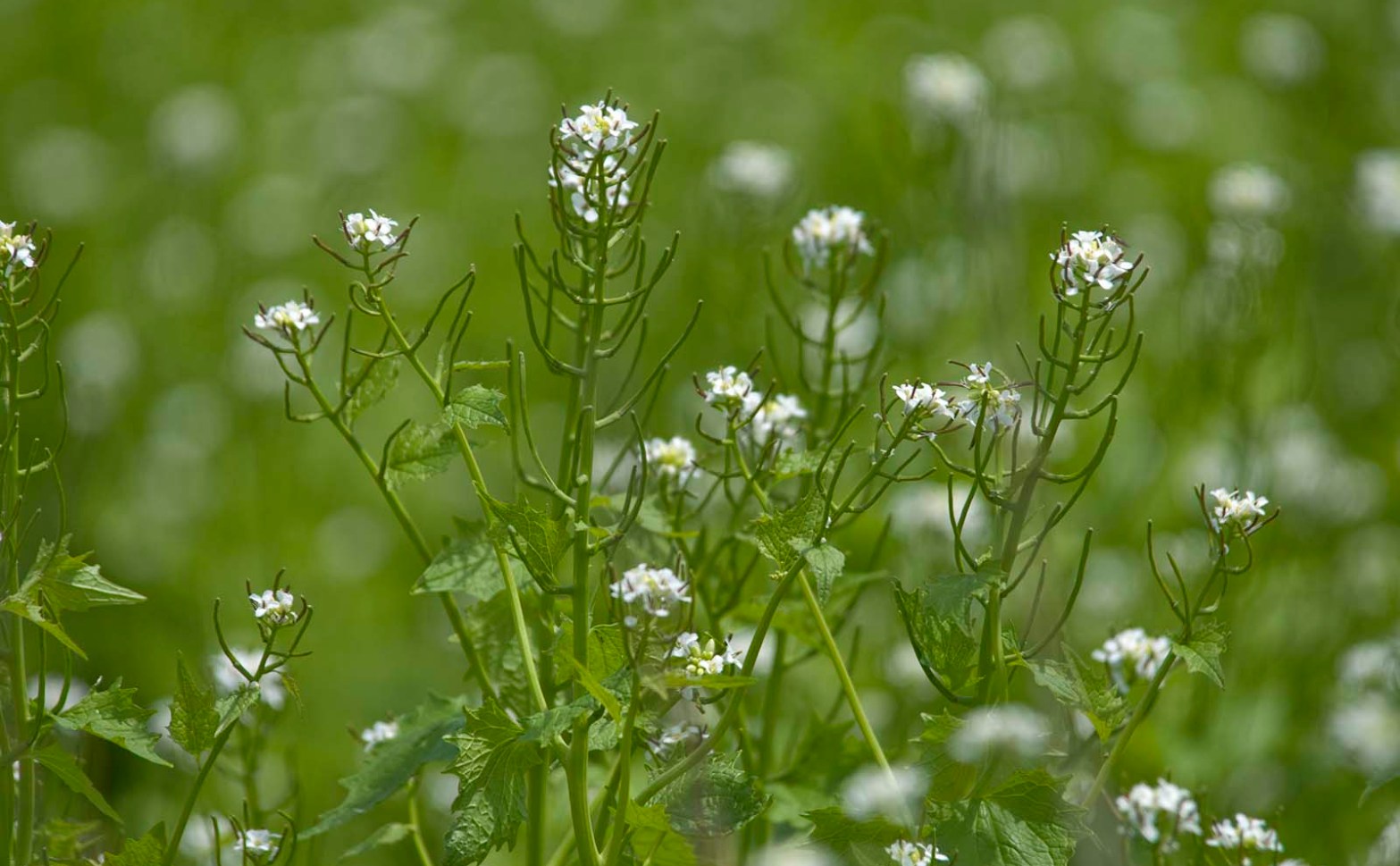 Even with faith as small as a mustard seed, then you can move mountains: nothing will be impossible. ― Viola Shipman, The Charm Bracelet