Another Reason to Battle Buckthorn

As plant enthusiasts, we often focus on how plants are affected by their environments. Their growth is affected by weather, water, nutrients, etc. But the plant-environment relationship is a two-way street, and plants can have a strong influence on the habitats they live in. We might experience this by walking in a forest and feeling ground beneath our feet that is spongy from the buildup of slowly decaying leaves that accumulated over decades or centuries. The trees in such a forest have “engineered” their environments, changing the very ground beneath them in ways that are beneficial to other plants, to animals, and to ecosystem functioning.

Unfortunately, we can also experience negative engineering effects of plants on their environments when we visit natural areas throughout the Chicago region and beyond that have been heavily invaded by the nonnative common or European buckthorn (Rhamnus cathartica). Buckthorn was brought to the Midwest for ornamental use—it’s great at making hedges—but escaped from human control and is now one of our region’s worst invasive species. As its hedge-producing credentials suggest, buckthorn is good at forming dense, shady thickets. These thickets have been shown to harm native plants and wildlife and to change physical, chemical, and soil conditions where they occur. Where there once may have been an open oak woodland underlain by a thick carpet of grasses, sedges, and wildflowers, we now often see an uninviting tangle of shrubs with little other than bare soil beneath them.

This contrast, between an environment that looks like this… 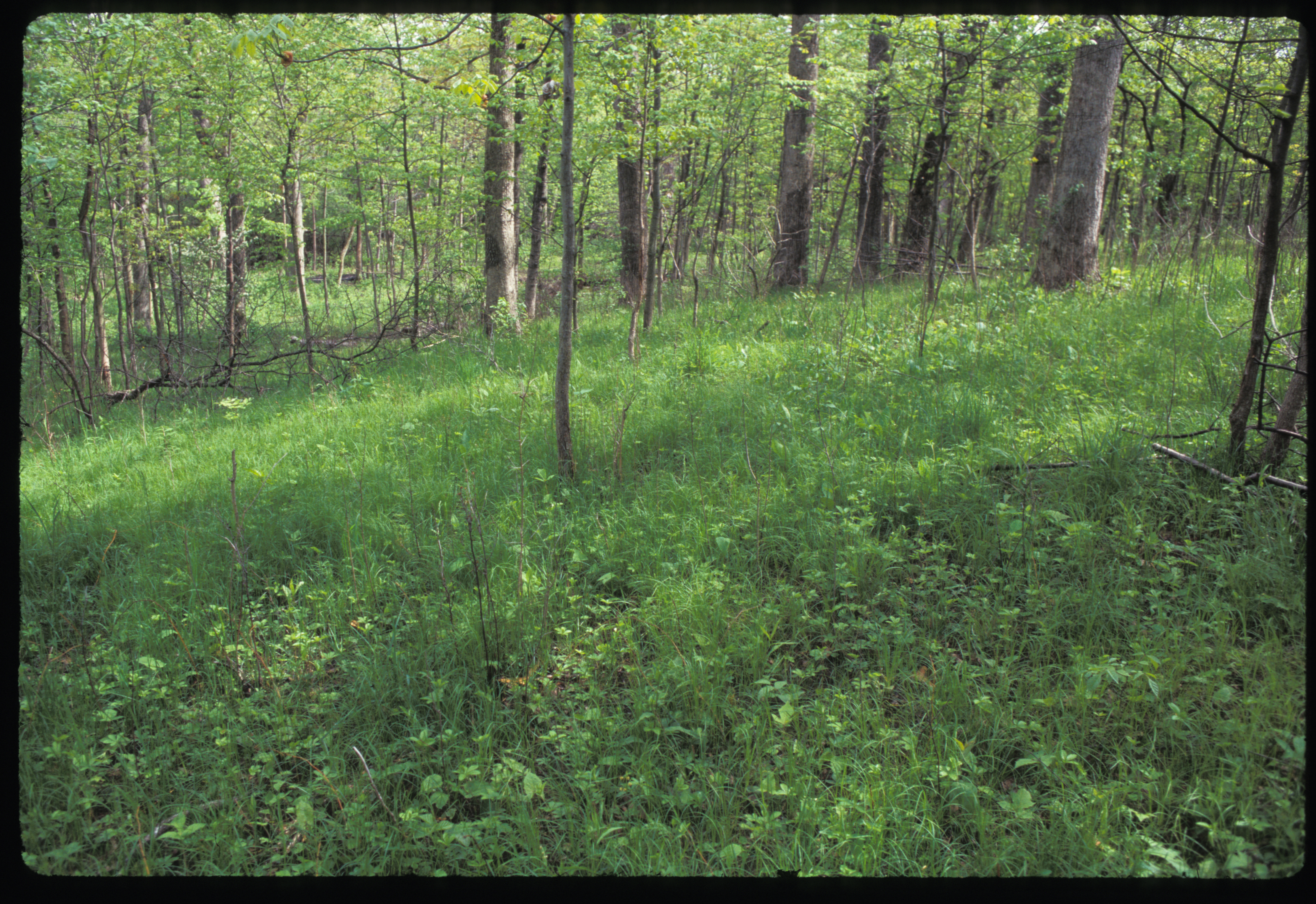 An open-canopied patch of woodland with robust growth of native vegetation in the understory (Photo: Jim Steffen) 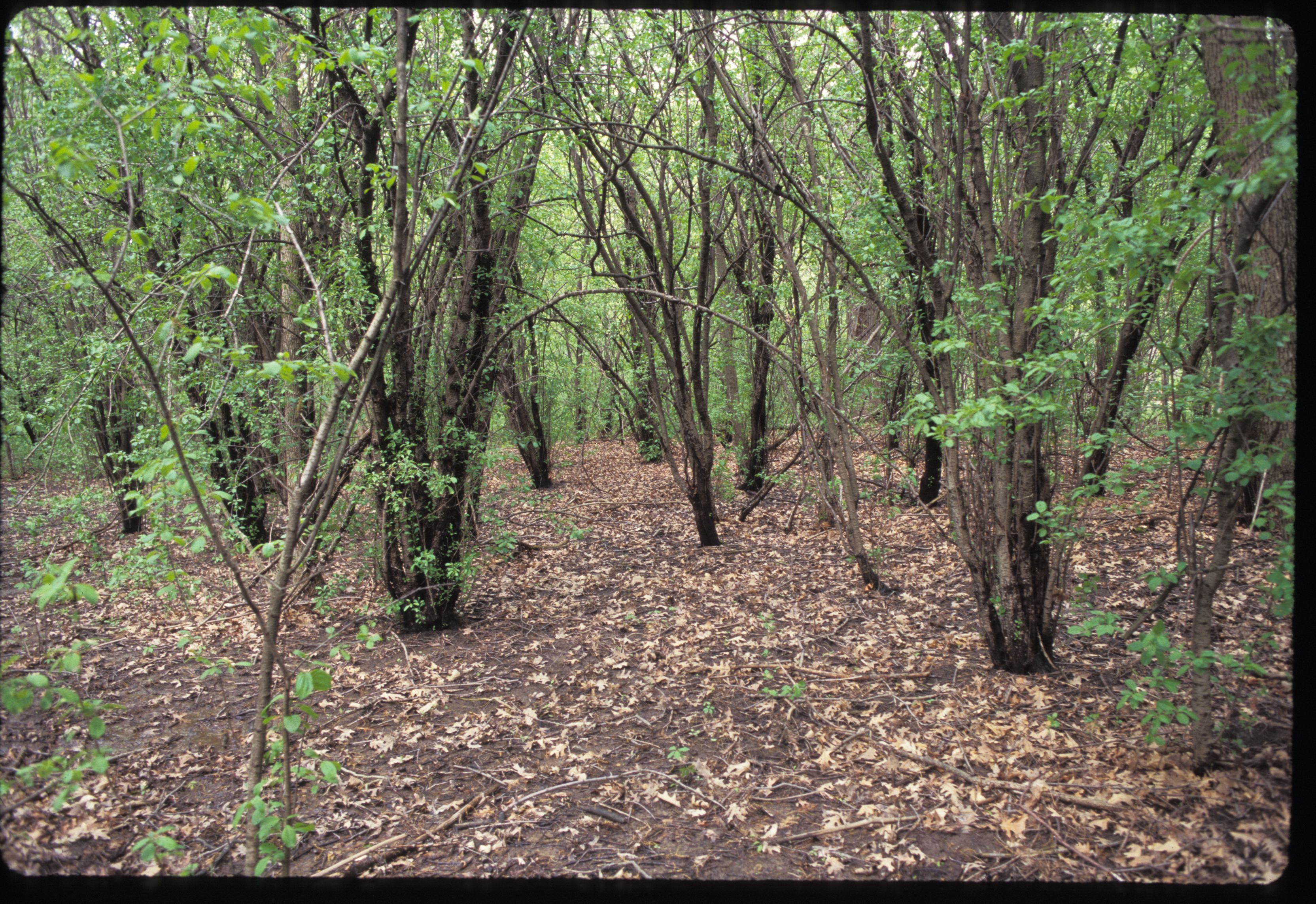 …got me and my colleague Jim Steffen wondering whether the ability of woodlands to perform carbon-storage ecosystem services could be impaired by buckthorn invasion. If so, could restoring impacted habitats back to native woodland vegetation return these services? Some background: Ecosystem services are essentially benefits nature provides to humans (e.g., clean air and drinking water, food, and other resources). Sequestering carbon—removing it from the atmosphere where it contributes to global climate change and instead locking it away harmlessly for potentially hundreds of years—is one such service.

Steffen’s more than two decades of work removing buckthorn from the Garden’s Mary Mix McDonald Woods and restoring native plant species had created the natural, long-term experiment we needed to answer these questions. We had access to areas still dominated by buckthorn for use as control treatments and patches of restored woodland of various ages that had previously been dominated by buckthorn (this is called a “restoration chronosequence”). And we had human capital to put to work: Rachel (Hesselink) Gentile and Chad Zirbel, who participated in the Garden’s Research Experiences for Undergraduates program (funded by the National Science Foundation) in 2009 and 2010, respectively. Gentile and Zirbel, in turn, mentored College First high school students Alan Lane and Kassandra Altantulkhuur.

So why did we think that buckthorn’s engineering of its environment might reduce carbon storage? Why not increase it? Mainly because of all the missed opportunities for carbon sequestration represented by the vegetation that buckthorn displaces: countless individuals of hundreds of species of understory plants, plants that make their living by drawing in carbon dioxide from the atmosphere. During photosynthesis, this captured CO2 is transformed into plant biomass, which occurs largely underground, in a complex tangle of fine, deeply penetrating roots that interact with the soil to produce tough, carbon-based compounds that are very slow to cycle back to the atmosphere. Not incidentally, all of these living understory plants and their deceased brethren (dead plant material is called “litter”) could help stabilize the soil, so that captured carbon would be less likely to wash away in thunderstorms and spring thaws.

What did we find? That buckthorn-dominated areas were indeed bad at storing carbon and that restored areas got better as they got older. Restored patches had lower rates of erosion and higher concentrations of persistent organic carbon in their soil. As restored areas matured, their vegetation continued to rebound, with plant diversity and litter biomass increasing over time. This maturation of the plant community was matched by steady increases in soil-carbon accumulation.

But wait, what about those thickets we see? Surely all that wood must be good for storing carbon? Not so much. We calculated wood biomass by measuring hundreds of trees. Even though restoration involved cutting down a lot of buckthorn, it actually led to a net increase in wood biomass, an increase that was also positively correlated with restoration age. Buckthorn’s thickets may look impressive, but its trunks and branches are puny compared to most trees, there is (almost) “no there there.” We think that taking out buckthorn may have freed native trees that can really get big, like white and red oaks, to better reach their growth potential.

In addition to the well-recognized benefits to biodiversity from active, long-term woodland restoration, our work and that of other scientists shows that there can also be tangible benefits to society. You can learn more about this research in our manuscript recently published in the journal Restoration Ecology. And you can expect to see further interesting work from Gentile (now pursuing a Ph.D. in ecology at Notre Dame), Zirbel (pursuing his Ph.D. in ecology at Michigan State), Lane (an undergraduate at DePaul University), and Altantulkhuur (attending the University of Illinois at Chicago).