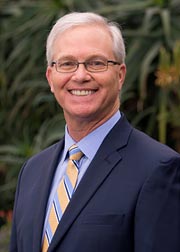 Fred Spicer is executive vice president and director of the Chicago Botanic Garden. Spicer’s role entails the stewardship of the living collections of the Garden within the context of its designed landscape and its 27 display gardens, along with the development and management of its buildings and other structures. Spicer oversees all facets of horticulture, facilities planning and maintenance, and capital projects, with a focus on integrating new elements with the Garden’s established design style and vocabulary.

Before coming to the Garden in February 2017, Spicer served 15 years as the director and then CEO of the Birmingham Botanical Gardens in Alabama. As chief executive, Spicer led the transition of a largely city-directed public garden to a highly regarded public-private partnership with the Friends of Birmingham Botanical Gardens. During his tenure, the garden’s reputation grew significantly, as an important urban green space, event venue, free science education provider, and popular regional destination know for horticultural beauty.

Before his service at the Birmingham Botanical Gardens, Spicer was manager of horticulture for the Morris County Park Commission in Morristown, New Jersey, where he oversaw the Frelinghuysen and Willowwood Arboreta. He is a 1983 graduate of Rutgers University with a bachelor of science in environmental planning, design, and landscape architecture.