Which witch hazel should be in your yard?

Something amazing is about to happen in the Bernice E. Lavin Plant Evaluation Garden: dozens and dozens of witch hazels will all burst into bloom at once in February.

It's year two of our six-year witch hazel trial, which compares 36 different cultivars (three of each!) from the four major Hamamelis species. As with all of our trials in the Plant Evaluation Garden, gardeners can witness the process as young witch hazels settle in, grow, bloom year after year, and mature into full-size plants under conditions similar to those in your own yard.

At first glance, witch hazels hardly seem candidates for tests or trials, since, as a group, they are hardy, maintenance-free, and ignored by most pests. Whether you think of them as small trees or large shrubs, they are manageably sized, topping out at 10 to 20 feet, with some spreading forms nearly as wide. They are shapely shrubs, with smooth, rather plain brown-to-gray bark. Handsome oval leaves, sometimes downy on the underside, turn all sorts of colors in fall. And then there's the crowning glory: shaggy, spidery winter blooms with long, crinkly petals, clustered up and down the length of the branches. 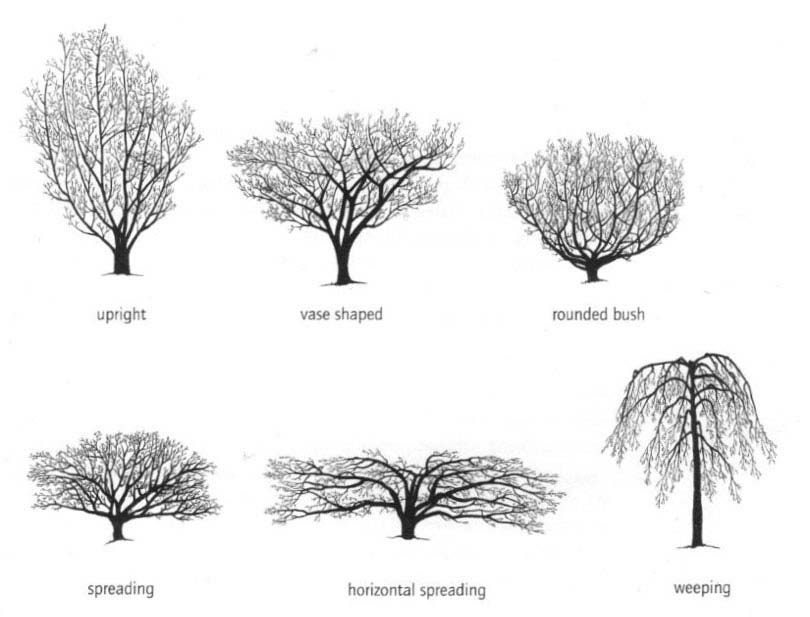 In fact, the only major drawback to witch hazels lies at their roots—a preference for well-drained, loamy, acidic soil means that they grow less than happily in clay soil.

That's what led two of our dedicated plantsmen — Dr. Andrew Bell, curator of woody plants, and Richard Hawke, manager of plant evaluation — to design the witch hazel trial. Their question: which of the myriad witch hazel cultivars perform best in Chicago's less-than-perfect soils?

Tour the witch hazel beds and you'll see H. x intermedia with names like 'Glowing Embers', 'Ripe Corn', 'Strawberries and Cream', and 'Purple Ribbons'. The rare opportunity to compare them — all in bloom at once — is a gardener's dream when it comes to choosing a finalist for your yard.

Andrew Bell explains how to use witch hazels to best advantage at home. "Give them full or three-quarter-sun in a well-drained spot where their roots won't stay wet," he says (an important note for those with automatic irrigation systems). "The idea is to plant witch hazels against a background of dark evergreens or contrasting brick, so the clusters of flowers lining the bare branches are shown off to best effect."

The great botanist Linnaeus saw leaves, flowers, and the prior year's fruit all at once on a single native witch hazel, thus choosing "hama" ("at the same time") and "melon" (apple or fruit) for its name.

For native plant aficionados, our North American native witch hazel, Hamamelis virginiana, is also trialed, along with five of its cultivars. The native species is hardy (USDA Zones 3-8), spectacular in autumn (it flowers at the same time as its leaves turn golden yellow, rather than blooming in winter), and its fragrance is somewhere between sweet and intoxicating on a fine fall day. H. virginiana is the witch hazel grown and harvested for the extract of its bark and roots, which is distilled into the common astringent that bears its name. Plant it in your yard and you'll honor history: none other than Linnaeus himself named it in 1753.

So far in our trials, Dr. Bell singles out 'Little Suzie' and 'Harvest Moon' as species cultivars with lots of landscape potential — the former for its abundance of flowers on a compact frame, and the latter because it drops its leaves before its lemon yellow flowers open in fall.

Seven Hamamelis vernalis (vernal, or spring-blooming, witch hazel) cultivars round out the trial. These are the witch hazels native to the Ozark Mountains areas of Missouri and Arkansas, renowned for their intensely fragrant (though smaller-sized) flowers. Look for H. vernalis 'Amethyst'. "Its dark, near-purple flowers aren't as noticeable as lighter-colored blooms," says Dr. Bell, "but the display would be fantastic against a white house or pale stone wall."

Alone among the four major witch hazel species, Hamamelis japonica won't be found in our trials — while it's common on the mountainsides of Japan, it can't handle the extremes in Chicago-area weather. There is one example of the species at the Chicago Botanic Garden, though: it's a bonsai, one of the 19 trees donated by Japanese bonsai master Susumu Nakamura to our collection in 2000. A spectacular tree in an unexpected size, this witch hazel was the star of our Three Friends of Winter bonsai silhouette show in January; it can be seen periodically in the bonsai courtyards.

To get to the Bernice E. Lavin Plant Evaluation Garden, cross the Trellis Bridge from Evening Island or walk/bike the outer road from the parking lots. The witch hazel trial beds are at the far north end of the garden. You can't miss them — they'll be the only thing blooming in winter! It's a sight every smart gardener should see.

Want to know more about witch hazel cultivars? Our Plant Information staff has the information! Click here to read more about it.

Dr. Michael A. Dirr, tree guru and renowned author of Manual of Woody Landscape Plants, says of H. x intermedia, "Why these plants are not in greater use is beyond me." 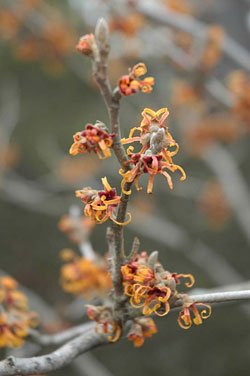 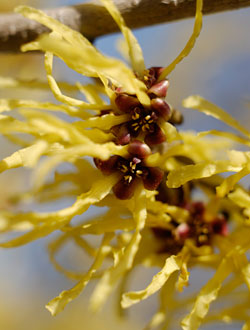 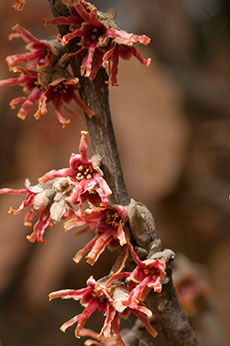