For most gardeners, the top vegetable is the tomato. As they plant in late May, visions of red, round, juicy beefsteaks dance in their heads.

Or not. Some gardeners see tomatoes in a rainbow of colors: red, sure, but also shades of yellow, orange, pink, green, burgundy, purple, streaked and striped, and practically black. Along with those colors come a range of flavors. There's a tomato for every taste.

There's the blocky pink hybrid 'Early Wonder', early maturing and determinate. Determinate tomatoes grow to a certain size and stop, producing all their fruit over a few weeks and then quitting. Because they tend to be smaller and bushy and need less staking, they are a good choice for smaller gardens and containers, according to Lisa Hilgenberg, horticulturist at the Garden's Regenstein Fruit & Vegetable Garden.

Most varieties are indeterminate, meaning they will continue to produce fruit until frost. But they are long, sprawling vines. "Tomatoes can be an awkward plant," says Hilgenberg, and indeterminate tomatoes must be caged or tied to stakes or trellises. The payoff, though, is that indeterminate varieties, especially older heirlooms, provide a spectacular range of flavor, shape—and color.

Take 'Black Krim', a brownish Russian variety with "a very salty taste," Hilgenberg says. Like many dark varieties, it comes from the area around the Black Sea. 'Cherokee Purple' is a burgundy tomato with a sweet, complex flavor sometimes described as having smoky undertones. 'Cream Sausage' is a meaty, finger-shaped tomato that is a pale, buttermilk yellow. Imagine it in a fresh salsa with cilantro. 'Dr. Carolyn' starts ivory and turns yellow as it ripens. 'Paul Robeson' is nearly black. 'Green Zebra' is green striped with yellow.

'Emmy' is orangey-yellow with a very intense flavor. As with many heirlooms, part of the attraction of 'Emmy' is its origin story: originating in Transylvania, its seeds were passed to an Oregon couple living in Germany by a Romanian refugee. Like many of the Garden's tomatoes, its seeds were ordered from Seed Savers Exchange.

Not all heirlooms are sprawlers. 'Nebraska Wedding', another orange variety, is determinate, and its seeds are said to have been passed to Nebraska brides on their wedding days.

Sometimes the interest of a tomato is its shape. Some tomatoes are long, like chili peppers. Some are shaped like tiny pears or large strawberries. Some are tiny, like berries. Others are deeply lobed, such as 'Costoluto Genovese', a red Italian variety that has folds like draperies.

Whatever their color, tomatoes have the same needs.

Full sun is essential—a solid eight hours each day. A southern exposure, where the sun shines all day as it moves from east to west, is ideal, Hilgenberg says.

Fertile, rich, but well-drained soil also is a must; tomatoes are heavy feeders, Hilgenberg says, and the Garden applies no fertilizers. The nutrition comes from compost and well-composted cow manure, spread on beds in late winter and dug in several weeks later.

Perhaps the trickiest part of growing tomatoes is providing steady moisture. If the water supply is uneven, with soil moisture swinging between dry and wet, ripening tomatoes can crack. Uneven watering also is related to blossom drop and blossom end rot. On the other hand, soaking-wet soil can rot roots.

Gardeners have various strategies for providing steady moisture, from self-watering containers to soaker hoses with timers to milk jugs buried neck-high next to plants, with a pinhole so water oozes out slowly. But one essential is an organic mulch, to deter surface evaporation that dries out soil. The Garden usually uses straw, Hilgenberg says, but other gardeners may use last autumn's fallen leaves.

Tomatoes are semitropical plants, probably originating in Peru thousands of years ago before they were domesticated and the long process of selective breeding began for color, shape, flavor, and tolerance for shorter seasons. But their origin means they can't tolerate cold soil or frost, so even during a freakishly warm spring it's not wise to plant them before Memorial Day.

Even determinate tomatoes likely need some support. They need to be held high where the leaves and fruit are exposed to sunlight and air can circulate freely to deter disease. That means providing a stake, trellis, or cage early, when they still seem tiny and insignificant and before they explode into sprawling monster vines. With stakes or a trellis, you'll need to tie the growing vines up with soft, flexible ties—repurposed pantyhose work well—and prune ruthlessly to direct energy toward the fruits you want and to keep the plant (and the harvest) manageable.

Don't plant tomatoes in the same space year after year, or soil-borne diseases can become a problem. Rotate all plants of the nightshade family, including tomatoes and peppers, with plants of other families, such as the brassicas (cabbage, Brussels sprouts, broccoli, and pak choy) or the squashes or lettuces and spinach. If tomatoes are only in the same spot every three or four years, the cycle of soil-borne disease is likely to be broken.

It's perfectly possible to grow tomatoes in large pots. But make them large and deep, so the soil doesn't dry out too fast and there's space for an ample root system. Use a rich, freely draining, sterile potting mix, and mulch over the surface.

Tomato transplants, whether grown at home or bought in the garden center, should be planted deeply. Pinch off the bottom few leaves and plant a few inches of the main stem below the soil; new roots will grow out from it to better supply the plant with water and nutrients. In pots, you may need to use an organic slow-release fertilizer.

The widest range of colors, shapes, and flavors is available when you shop for seeds by mail order and start seeds at home, but a reasonable variety of ready-grown transplants is available in May at good garden centers—just be sure you harden the plants off, exposing them gradually to the outside over a few days, and don't plant them too early. Let them enjoy warm soil and summer sunlight so they can grow into their best flavor and color—whatever that color may be. 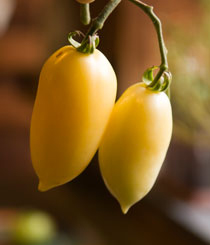 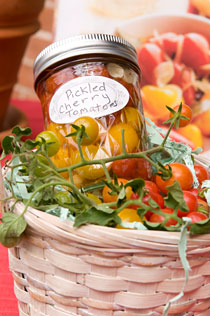