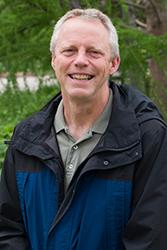 Johnson graduated with a bachelor of science degree in horticulture from the University of Nebraska-Lincoln in 1984. He worked as a foreman for Campbell's Garden Center, installing and maintaining landscapes. During summer breaks from college, he completed internships at the Beatrice Developmental Center in Beatrice, Nebraska; Callaway Gardens in Pine Mountain, Georgia; and the Colonial Williamsburg Foundation in Williamsburg, Virginia. Johnson has been with the Garden since January 1985 in a  variety of positions—including assistant horticulturist, horticulturist, grounds supervisor, and grounds manager—before he became the director of horticulture in 1996.

Johnson's interest in gardening began in grade school, when he had a large collection of houseplants. He also planted and transplanted flowers around the family home, and helped his grandfather maintain two large vegetable gardens each summer. Johnson's garden at home is low maintenance and consists primarily of mixed shrub and herbaceous borders.