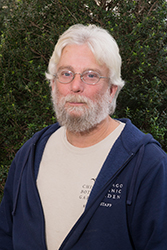 Lorin Fox is the grower for the woody plants, perennials, and aquatics in the Plant Production department. His job is to produce high-quality plants for the Garden's plant collection and special displays.

Fox has worked at the Garden since 2005, when he began work as a Plant Production seasonal employee. He also worked as a grower for floriculture with a focus on annuals. He became interested in gardening as a child, when his family had a vegetable garden, a couple of crabapple trees, and a grapevine. He moved on to working in a friend's garden and greenhouse, and has been practicing the art of bonsai since 1997. His formal career in horticulture began after he was laid off from a screen printing and embroidering shop; he took horticulture classes for natural areas management at the College of Lake County though a retraining program.