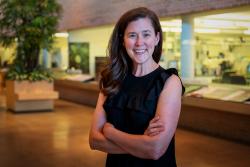 Selected Professional Associations:
Research Interests:
Understanding the diversity of life starts with uncovering the evolutionary histories and relationships between interacting organisms and landscapes. As a botanist, I am fascinated by the rich diversity of flowering plants (angiosperms) and the insects that interact with them - both pollinators and antagonists (herbivores, seed predators, etc.) - and how these interactions may help explain the great diversity we see today. Much of my work focuses on differences between hawkmoth- and bee-pollinated plant species and the implications for floral phenotypes (shape, color, size, scent), population connectivity, and species boundaries. I'm also intersted in the role that antagonists may play, especially those that are attracted to the same floral cues that attract pollinators (including color and scent) given the opposing, negative impacts of floral antagonists on plant fitness. Much of this work uses the Geographic Mosaic Theory of Coevolution as a model to explain the evolutionary relationships between members of the evening primrose family, Onagraceae, their hawkmoth and bee pollinators, and antagonist microlepidoptera in the genus Mompha (more info here).
I am also committed to plant conservation efforts, including investigating the impacts of anthropogenic factors on plants and pollinators. My previous work has investigated the impact of land use change on an endemic, hawkmoth-pollinated evening primrose, Oenothera harringtonii and the role that atmospheric nitrogen deposition may have played in the decline of the nitrogen-fixing legume, Desmodium cuspidatum.
Scent-mediated diversification of flowers and moths across western North America

We commonly think of floral scent for its role in attracting pollinators, but it can also be a cue for floral and seed predators. This project integrates chemical ecology and comparative genomics to explore the impact of past selective pressures on current patterns of diversity in non-model organisms: evening primroses, hawkmoths, bees, and micromoths. In particular, we are investigating how chemically-mediated interactions between flowering plants, pollinators, and enemies affect diversification at the population, species, and higher taxonomic levels. Onagraceae (evening primrose family) is one of the most species-rich families of night-blooming plants in North America. Many Onagraceae, particularly species in tribe Onagreae, produce floral scent that likely dictates the primary biotic drivers impacting plant fitness, including legitimate pollinators (hawkmoths, bees) and floral and seed predators (Mompha moths). The same floral characteristics (color, shape, scent) that attract pollinators are also suspected to attract floral antagonists to host plants. Mompha is one such moth genus that specializes on Onagraceae. A thorough survey of these micromoths associated with Onagreae in western North America will result in a more accurate assessment of diversity in this group. Three dimensions of biodiversity will be integrated through studies of (1) floral trait variation, (2) its genetic basis, and (3) their roles in driving patterns of diversity in Onagreae and Mompha. The identification of “hot” and “cold” spots of selection will provide a test of the role of scent in the creation and maintenance of biodiversity across landscapes and time.

Long-Distance Pollinator Movement – Oenothera harringtonii
This project investigates pollination, reproduction, and gene flow in the Colorado Springs evening primrose (Oenothera harringtonii, Onagraceae), a species endemic to southeastern Colorado. The flowers of Oenothera harringtonii open soon after sunset and are pollinated primarily by hawkmoths. Hawkmoths can travel up to 20 miles in just one night, and may therefore contribute significantly to long-distance gene flow among populations. These moths feed on the nectar of Oenothera flowers, which they locate by the strong fragrance produced by the flowers. This species is found in an increasingly fragmented landscape; however, little is known of the impacts that fragmentation and light pollution may have on the community of pollinators upon which it relies for reproduction and long-term population persistence. Studying populations in both fragmented/developed and unfragmented areas will allow me to determine the extent to which habitat fragmentation and light pollution may be negatively impacting both hawkmoth populations as well as populations of Oenothera harringtonii. A combination of field, greenhouse, and molecular tools are being used to understand which pollinators visit flowers, to what they are attracted (floral scent, size, nectar sugar concentration, etc.), and whether plants are successfully reproducing (demographic data, hand pollinations), and to examine patterns of gene flow (microsatellite markers).

Understanding Causes and Consequences of Species Decline – Desmodium cuspidatum
My previous research on the perennial legume, Desmodium cuspidatum (large-bracted tick-trefoil, Fabaceae), explored whether nitrogen deposition (acid rain) may contribute to the decline of a nitrogen-fixing plant species. This species has experienced a dramatic decline in the northeastern portion of its range in the last 30 years, from approximately 28 populations in the mid-1970s to just nine populations as of 2007. However, populations elsewhere in the species range have not declined. Interestingly, the pattern of decline in Desmodium cuspidatum is consistent with the pattern of nitrogen deposition in the United States: the highest, for the longest period of time, in the northeast. Studies of demography and reproductive biology revealed that extremely low reproductive success and recruitment (birth) rates might be limiting population growth. Furthermore, patterns of genetic diversity suggest that current populations harbor high levels of genetic diversity but might be threatened in the future if gene flow is restricted among existing populations.

Rhodes, M. K.*, J. B. Fant, and K. A. Skogen. In review. Linking variation in pollinator identity and plant spatial isolation to mating dynamics in an insect-pollinated plant. Molecular Ecology.

Jogesh, T., R. P. Overson, R. Raguso, and K. A. Skogen. In review. Herbivory as an important selective force in the evolution of floral traits and pollinator shifts in a clade of evening primroses, Oenothera sect. Calylophus (Onagraceae). AoB Plants.

Research in the Skogen Lab combines a variety of different scientific approaches to answer broad-scale conservation and biodiversity questions to ultimately guide policy and management decisions. In particular, the research that my students and I conduct integrates data on pollination biology, reproductive biology, population genetics, and threats imposed by anthropogenic activities, including nitrogen deposition, habitat fragmentation, and climate change. This website provides information on research conducted by myself and my students, as well as news, photos, and videos of current and previous research.

This project integrates chemical ecology and comparative genomics to explore the impact of past selective pressures on current patterns of diversity in non-model organisms: evening primroses, hawkmoths, bees, and micro moths. Onagraceae (evening primrose family) is one of the most species-rich families of night-blooming plants in North America. Many Onagraceae, particularly species in tribe Onagreae, produce floral scent that likely attracts pollinators (hawkmoths, bees). The same floral characteristics (color, shape, scent) that attract pollinators are also suspected to attract floral antagonists to host plants. Mompha is one such moth genus that specializes on Onagraceae. Three dimensions of biodiversity will be integrated through studies of (1) functional diversity, (2) genetic diversity, and (3) taxonomic diversity.

The Conservation and Land Management Internship Program provides a unique internship experience to college graduates. Interns learn new skills, experience real-world land management and conservation, and develop connections that can lead to future employment. Each year, between 70 and 85 interns are hired to work closely with federal biologists in the Bureau of Land Management, National Park Service, USDA Forest Service, and other federal agencies. The CLM program invests in young people and builds on their enthusiasm and capacity to make a substantial contribution to protecting the environment. The majority of internships focus on projects in botany or wildlife-related fields, or combinations that have involved monitoring or assessing threatened and endangered species. Interns have also worked in fire ecology, fisheries, livestock utilization, and native plant materials. Most recently, internships have involved native seed collecting that will contribute to seed banks or restoration activities. For more information and to apply for an internship, please visit the CLM website. To learn about projects that current and previous interns have participated in, please visit the CLM Blog at www.blog.clminternship.org.