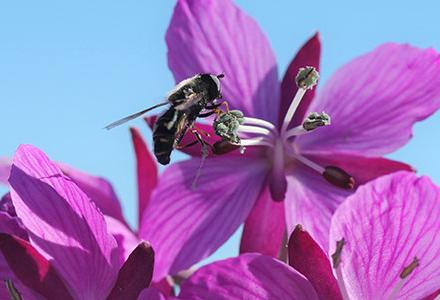 Scientist Amy Iler, Ph.D., is part of a research team reviewing major impacts of climate change in polar regions of our planet. The study was motivated by the upcoming International Polar Year (IPY), a scientific research campaign focused on the latest findings in the polar regions: the Arctic and Antarctic. The Arctic is warming twice as fast as the rest of the earth, resulting in melting ice on sea and land, release of the powerful greenhouse gas methane due to melting permafrost, and disruptions of species interactions (Dr. Iler’s research specialty). For example, the already brief flowering seasons of the Arctic are becoming even shorter. These shorter flowering seasons are associated with reductions in fly populations, which are very important pollinators for Arctic plants.

“One of the most fascinating and concerning aspects of warming in the Arctic is the positive feedback between warmer temperatures and melting sea ice, which leads to even warmer temperatures because water absorbs much more sunlight as heat than ice does.” It is important to understand how climate change affects the Arctic because big changes in one area can affect the climate system of the entire planet. Iler says that this positive feedback is being linked to extreme summer weather events in the Northern Hemisphere, and more tenuously to a weakening of the winter jet stream and polar vortex.

This scientific review was recently accepted for publication in the peer-reviewed journal, Science Advances, available here.