Chicago Botanic Garden scientists received a grant from the National Science Foundation to collect and study fossil plants from Mongolia and Inner Mongolia, China. The three-year grant to Patrick Herendeen, Ph.D., and Fabiany Herrera, Ph.D., funds an international team of scientists to investigate the diversity and evolution of plants 66 to 250 million years ago when ecosystems changed very rapidly.

“Mongolia and Inner Mongolia, China, are well known for their diverse dinosaurs and early mammals during the Mesozoic era, but very little is known about the plants that constitute habitats that supported all terrestrial life in this part of Asia,” said Dr. Herrera.

Mongolia and Inner Mongolia at this time were dominated by swamps and forests with diverse seed plants and relatives of modern conifers. Although some of the fossils appear modern, others represent extinct groups that are unlike any living plant. Researchers are discovering fossils never seen before.

This study will discover the new species of seed plants and help to clarify key evolutionary relationships among plants during a crucial period of Earth’s history.

Photo: The field camp of Dr. Herendeen and Dr. Herrera in Tevshiin Govi, a coal mine in Mongolia that was covered with trees about 100 million years ago. 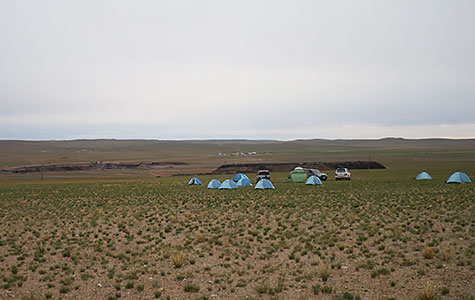