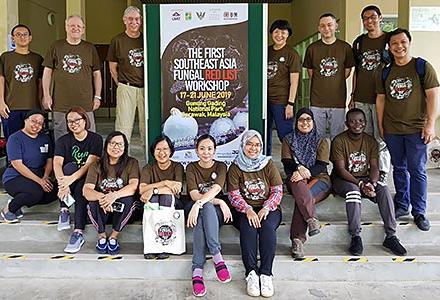 Garden scientist leads first South East Asian Fungal Conservation Workshop. This past summer, scientists from Malaysia, Thailand, Singapore, Germany, Belgium, and the United States met in Sarawak, Malaysia, to carry out the first conservation assessment of fungi (mushrooms) in Southeast Asia. Fungi are important for forest health and many are valuable as medicine and food for people. Losing unique species of fungi diminishes the health of natural ecosystems, especially forests. Yet, to date, the conservation status of the vast majority of fungal species has never been assessed. A crucial component for targeting conservation action and priority of the workshop was to determine which species are thriving and which are rare or declining. Greg Mueller, Ph.D., chief scientist and Negaunee vice president of science at the Chicago Botanic Garden, taught other scientists how to evaluate a species’ threat of going extinct. This training was followed by group discussion of the conservation status of numerous species of fungi in the region. Nearly 25 percent of the species were assessed as threatened due to logging or a lack of information on how to best manage the species. A symposium following the workshop brought together politicians, land managers, social scientists, and biologists to discuss how best to conserve fungi in Malaysia and other Southeast Asian countries. “The conservation of fungi is significantly lagging behind efforts for animals and plants, but we are making considerable progress,” stated Dr. Mueller. The workshop and symposium were funded by the Sarawak Forestry Corporation. This is one of three fungal conservation workshops that Mueller is co-leading this year; the others were in the United Kingdom and Australia.