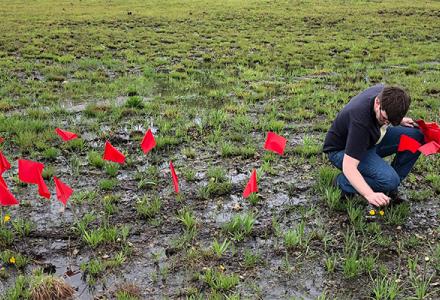 A new collaboration between Garden scientists and the U.S. Fish and Wildlife Service is hoping to expand the range of a species once extinct in Illinois. Garden scientists, students, and collaborators are conducting research to guide recovery of the federally threatened lakeside daisy (Tetraneuris herbacea). Plant Biology and Conservation Ph.D. student Rafael Urbina Casanova is working with Garden scientists Drs. Jeremie Fant and Andrea Kramer, and collaborators Jenny Finfera and Cathy Pollack at the U.S. Fish and Wildlife Service to understand genetic and ecological limits to its recovery in Illinois and the Great Lakes region.

“Lakeside daisy relies on dry, rocky habitat in the Great Lakes region to survive. Unfortunately, this habitat is often quarried, so very little habitat remains available in Illinois,” said Rafael. This species, which was never common or widely distributed, went extinct in the wild in Illinois in 1981, and was found at only a few sites in Ohio, Michigan, and Ontario (Canada). Six populations in Illinois were reintroduced over 30 years ago, using plants that resulted from cross pollinations between the three remaining plants in Illinois and those from the largest remaining population in Ohio. However, only three of the populations from the reintroduction have survived and are unlikely to survive over the long-term.

“We suspect one reason for these declines is too little genetic diversity. This species is self-incompatible, meaning that it can only create viable seeds if pollination occurs between unrelated individuals. If too few genetically different individuals remain in a population, it will not be able to produce seeds for the next generation,” said Rafael. “I hope my research will bring stakeholders together, inform efforts to recover this species in Illinois, and complement the U.S. Fish and Wildlife’s work with the species in Ohio.”