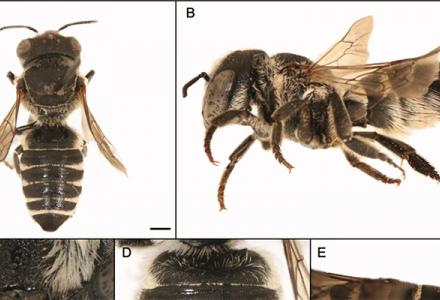 Scientists report new non-native bee species for state of Illinois. Andrea Gruver, a student in the Chicago Botanic Garden and Northwestern University graduate program, along with Paul CaraDonna, PhD, conservation scientist at the Garden, reported the first record in Illinois of a non-native leaf cutter bee, Megachile apicalis. This finding is part of Gruver’s graduate research, which aims to understand the effects of urbanization on the wild bees of the Chicago region. All of the bees were found exclusively in highly urban areas of Chicago, Illinois, suggesting that Megachile apicalis may flourish in highly disturbed areas. In fact, Gruver hypothesizes that Megachile apicalis thrives in urban environments, like Chicago, and is spreading across North America, because it is active for much of the summer growing season and can take advantage of abundant non-native floral food resources.

This work was recently published in the peer-reviewed scientific journal, The Great Lakes Entomologist: First records of Megachile apicalis (Hymenoptera: Megachilidae) from Illinois found in heavily urbanized areas within the City of Chicago. 2020. Gruver, A.M. and P.J. CaraDonna. The Great Lakes Entomologist 53:41–45 The full article can be found here: https://scholar.valpo.edu/tgle/vol53/iss1/6/