Native plants are those flowers, grasses, shrubs, and trees that are indigenous to a geographical region. Invasive species like buckthorn are those that, when introduced to a new location, can spread prolifically, competing with native species for resources and eventually dominating the landscape. Some invasive species were popular ornamental plants used in landscaping. Chicago Botanic Garden scientists researching invasive species have discovered that buckthorn was not nearly as pervasive in our region in previous centuries as it is today. And they are doing something about it here at the Garden.

Jim Steffen, senior ecologist at the Garden, has been leading an effort to understand the effect of buckthorn on native woods, and to remove it with the help of volunteers. Some of the most remarkable transitions following the removal of buckthorn can be seen in McDonald Woods and the Barbara Brown Nature Reserve. Restoration of McDonald Woods began in the late 1980s. The goals were to eradicate buckthorn and other invasive plants and reestablish a diverse, open-canopied woodland with improved ecosystem functioning. For understory vegetation, targets included high native-species diversity. Management actions included revegetating eroded gullies, removing buckthorn and other invasive species, and prescribed burning in patches. About 150 native plant species were added as seed, including 30 sedge, 16 woodland grass, and 25 Asteraceae species.

In the Barbara Brown Nature Reserve, Garden staff removed the dense infestation of buckthorn and other nonnative flora. Beginning in 2009 and continuing over the next several years, native ground cover, shrubs, and tree species were added. Darrel G. Morrison, an ecologist, landscape designer, and author, created the restoration scheme for the Reserve.

After the restoration, the open canopy allowed vegetation in the understory to begin to thrive again. Garden researchers discovered that buckthorn removal improved the ability of the restored woodland to store carbon. McDonald Woods has been restored, allowing it to perform carbon-storage ecosystem services, helping the Garden as well as the wider Illinois region.

When considering buckthorn removal, specific steps should be taken in order to prevent the seeds from germinating. Buckthorn remains one of the most invasive shrubs in our area mainly because of the plant's ability to reseed. Birds consider the small black fruit a delicacy and contribute to the plant's invasive spread. A good way to remove stands of buckthorn and lessen the risk of spreading the plant is to remove the plants before they flower and set seed. Buckthorn plants bloom from May to June and seeds are produced and ripen in August and September. If you suspect that removed buckthorn plants contain seeds, bag and mark them as landscape waste and place them out with your trash rather than composting them. Landscape waste is banned from landfills in Illinois, so waste companies take these products to a composting facility. High temperatures there are critical for the destruction of seeds.

As gardeners become more aware of the trouble caused by invasive species, many are making changes in their own gardens. A trend toward sustainable gardening includes such steps as minimizing lawn areas, planting fruit trees, making rain gardens, using rain barrels, and composting food waste. An essential first step for any gardener looking to create a sustainable garden is to remove buckthorn and other invasive species, such as garlic mustard. Pati Vitt, Ph.D., a conservation scientist at the Chicago Botanic Garden, explains: "The goal of sustainable gardening is to create a self-reliant growth system—a garden that can last indefinitely without inordinate external support." 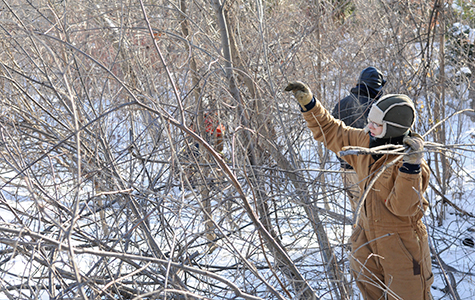